Doesn't take long for Metcalf to stand out with Seahawks 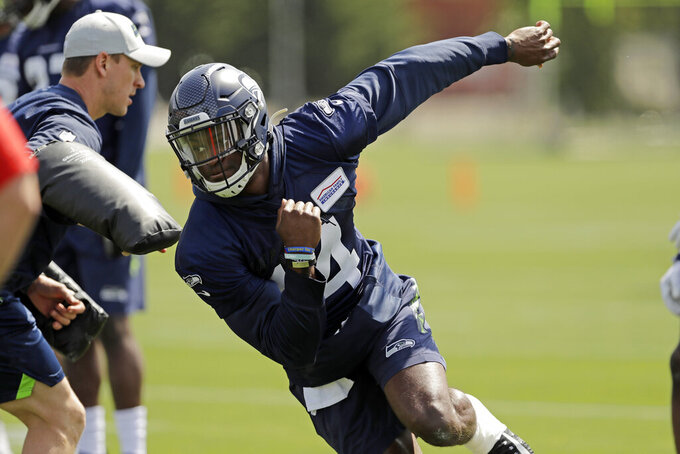 RENTON, Wash. (AP) — There was no chance the phone call intended for D.K. Metcalf was someone pulling a prank.

Not when it was a video call and Seattle Seahawks quarterback Russell Wilson was on the other end.

"I was amazed, kind of shocked. But I had to realize that was my teammate and I wasn't a fan anymore," Metcalf said.

If Metcalf needed a welcome to the NFL moment, it arrived when his new quarterback reached out to welcome him to the Seattle. And it has continued during Metcalf's first weekend with the Seahawks during their rookie camp where the wide receiver has been the star attraction.

At 6-foot-4 and nearly 230 pounds, he's hard to miss. Throw in a handful of leaping catches through the first two days — albeit against defenders being told not to make plays on the ball — and it's easy to see what made Seattle so attracted to Metcalf.

Asked what excites him most about his new wide receiver, Pete Carroll said: "Well, it's almost like, what doesn't, you know?"

"He's big and he's fast. He's got really good feet, you know, and his catching range was exhibited today for a start," Carroll continued. "And you know, we've got to figure it out, figure out where it is, maybe even more unique than we thought coming in. So we just develop it as we go. But big and really fast and the catching range was really obvious."

Even his new teammates are a little in awe of what Metcalf can bring. Defensive back Ugo Amadi was taken in the fourth round and once tried to convince Metcalf to go to Mississippi when they were in high school. He used "monster" and "freak" to describe Metcalf.

"I used to go up against him in high school, we used to go to camps together, he was that big in high school and I was still my size," the 5-9 Amadi said. "He's going to be definitely a threat when the season comes."

Metcalf's pre-draft workouts sent the league buzzing with his 4.33 40-yard dash, but his draft slide created even more attention. Expected to potentially go in the first round, Metcalf ended up being selected with the 64th pick in the second round after Seattle traded up to select the big wide receiver Carroll has long coveted. The selection ended an uneasy wait for Metcalf and the emotion came pouring out in his phone call with Carroll and general manager John Schneider.

But all of that is in the past. Seattle's rookie minicamp is the beginning of Metcalf proving the concerns which caused him to slide on draft boards were unfounded.

"Just be me. I don't have to prove anything to anybody. I'm just going to be myself," Metcalf said.

Route running has been one of the criticisms Metcalf has faced. He spent a significant amount of time before the draft working with wide receivers coach Jerry Sullivan in Arizona. The 74-year-old Sullivan coached wide receivers for six NFL teams beginning in 1992 and ending in 2016 with Jacksonville. It didn't take long for Metcalf to respect what Sullivan had to say after mentioning two of the receivers he had coached were Anquan Boldin and Larry Fitzgerald.

Metcalf said there were little tips from Sullivan — like being more decisive in his breaks — that he has tried to show in his first days with Seattle.

Carroll wasn't as concerned about the route running. His initial focus was on Metcalf's feet and whether what showed on film matched what he saw in person.

"You know, sometimes the bigger guys the feet just don't move as quick. His feet were really, really lightning quick and it showed it out here already," Carroll said. "So that means that the potential is there to make him an excellent releaser. He's already going to be really strong and using his hands, getting off the ball, but to have that combination, when we get a chance to tie it all together, it should be a really good package."