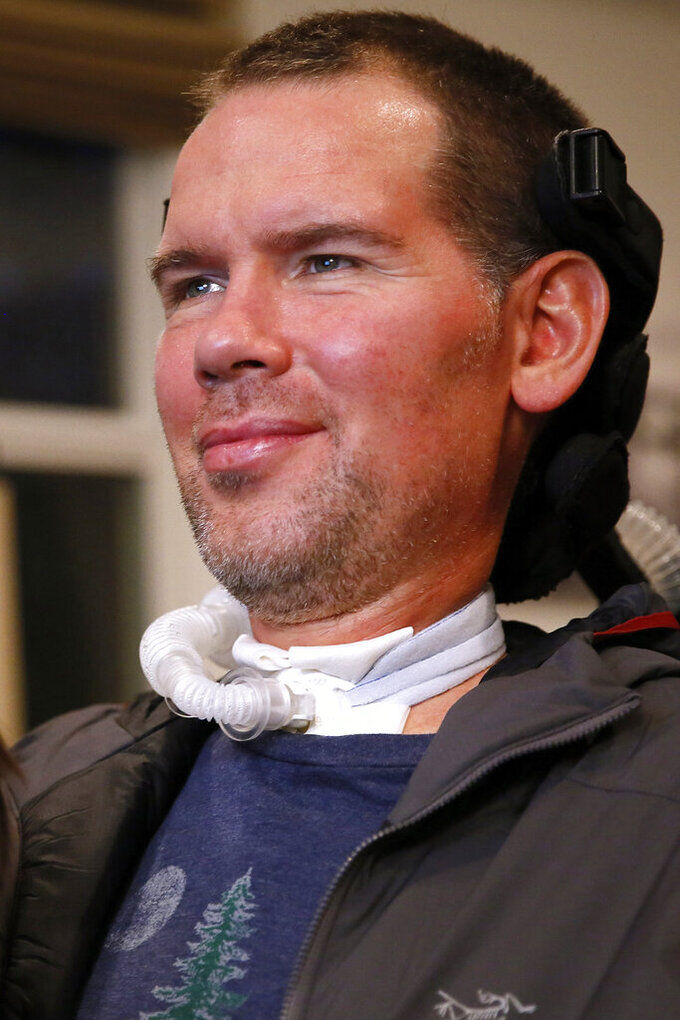 FILE - In this Monday, Jan. 18, 2016, file photo, former New Orleans Saints NFL football player Steve Gleason is shown during an interview in New Orleans. Gleason, who become a leading advocate for people struggling with Lou Gehrig's disease after he was diagnosed with the paralyzing condition, will be awarded the Congressional Gold Medal during a ceremony on Jan. 15. President Donald Trump signed legislation last year awarding Gleason the medal, which is the highest civilian honor awarded by Congress. (AP Photo/Jonathan Bachman, File)

NEW ORLEANS (AP) — Former New Orleans Saints player Steve Gleason, who became a leading advocate for people struggling with Lou Gehrig's disease after he was diagnosed with the paralyzing condition, will be awarded the Congressional Gold Medal during a ceremony on Jan. 15.

On the field, Gleason is best known for his electrifying blocked punt during the Saints' first game in the rebuilt Superdome after 2005's Hurricane Katrina. The city was still rebuilding from the devastating hurricane when Gleason dove to block a punt in the opening minutes of the game against rival Atlanta Falcons. The stadium itself had to be rebuilt after the storm tore open its roof as thousands of people sheltered inside.

The play was such an important part of the team's history and the city's recovery that it was immortalized in a 9-foot-tall (2.7-meter-tall) bronze statue outside the stadium called “Rebirth.” 9 feet

Gleason played seven seasons in the NFL — all with New Orleans. He and his wife continue to live in the city where he's frequently seen at sporting events, fundraisers, Saints' football practices and other events.

In January 2011, he was diagnosed with Lou Gehrig's disease, a struggle he documented in the 2016 film titled “Gleason.”

Cassidy said Gleason worked with the Congressional Gold Medal Committee on the medal's design. It features Gleason in a Saints jersey. Images of a mountain and forest pay homage to his native state of Washington.