If defense stays stout, Seahawks have chance at deep run 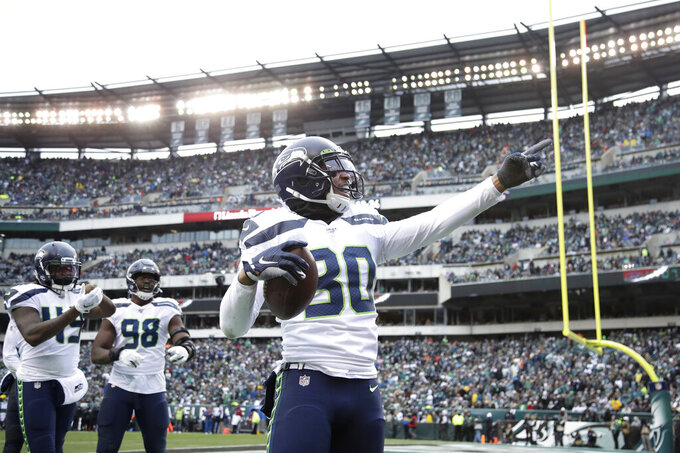 It was a matter of time before it stopped being just the Russell Wilson show in Seattle. Pete Carroll has too much pride in being a defensive coach, in having a defensive scheme that finds ways to stymie opponents.

For the first half of the season, it appeared if Seattle was going to be successful, it had to be Wilson carrying the load. It’s why he immediately jumped into the MVP conversation and remains there after Seattle’s 17-9 win over Philadelphia on Sunday that improved the Seahawks to 9-2.

But there’s been a shift the past two games for Seattle. Wilson hasn’t been great. He hasn’t been the nearly perfect quarterback Seattle needed. And that’s fine, because the Seahawks defense has improved drastically.

It started with the 27-24 overtime win over San Francisco when Seattle limited the 49ers to one offensive touchdown. And it continued Sunday when the Eagles were held out of the end zone until the final minute of regulation. Seattle held Philadelphia to 264 total yards until the final drive by the Eagles and the five forced turnovers were a season high by the Seahawks.

“The last two weeks we’ve given up a couple of touchdowns only, and eight sacks and eight turnovers, that’s just great numbers and we love that kind of stuff happening,” Carroll said Monday. “We’ve been waiting, kind of waiting to see if it would show.”

It’s only been two games, but it can’t be coincidence that the addition of safety Quandre Diggs to the starting lineup came as Seattle’s defense took a turn. Diggs was acquired from Detroit in a trade, but took a couple of weeks to get into the lineup because of a lingering hamstring problem. His addition allowed fellow safety Bradley McDougald to play a more impactful position and has allowed Seattle to play more of the single-high safety it did in previous seasons when Earl Thomas was in the back.

Wilson was sacked six times by the Eagles, the most he’s been taken down all season. Seattle has allowed 11 sacks in its past two games combined and the offensive line appears to be struggling with stunts and overload blitzes. Fixing the issues won’t get easier with the visit from the Vikings and their defensive front featuring Danielle Hunter and Everson Griffen, who have combined for 15 1-2 sacks already.

Carroll’s gut feeling was to give Rashaad Penny some more carries against the Eagles. It was clearly the right call. Penny’s 129 yards rushing were a career high and his 58-yard touchdown run in the fourth quarter was the clincher for Seattle. Penny has shown flashes throughout his two seasons, but the consistency of his performance and having opportunity has been scarce. For example, after running for 108 yards last season against the Rams, Penny had 12 carries for 50 yards combined over the next two games. Carroll seemed to indicate Penny’s outing against the Eagles would earn him more carries.

While Penny shined, Chris Carson may have lost some of his clout as Seattle’s primary running back. Carson fumbled once, but recovered, and was responsible for a second fumble due to a missed check by Wilson at the line of scrimmage. Ball security is one of Carroll’s primary tenets and Carson’s lack of security has become a major issue season. Carson has fumbled seven times, the most of any running back in the league.

He also had just eight carries, the first time this season he’s carried the ball fewer than 15 times.

Seattle will have two big questions on its defensive line going into the Minnesota game. Jadeveon Clowney would appear to be the biggest unknown with an injury related to a sports hernia, Carroll said. Clowney saw a specialist before Sunday’s game and Carroll said surgery is not needed at this time. There is hope Clowney should be able to play against the Vikings.

Along with Clowney, defensive tackle Jarran Reed suffered a sprained left ankle after being rolled up on by a teammate. Carroll said the ankle was already sore and the new injury aggravated the previous problem, and Reed would be re-evaluated later in the week.

12 — No, this isn’t in relation to the No. 12 retired for Seattle’s fans. It’s the number of fumbles lost by the Seahawks through 11 games. Seattle lost four fumbles during the regular season last year. It’s the most lost fumbles by Seattle at any point in Carroll’s tenure. The previous high was 11 in his first season in 2010.

Games between playoff contenders in December don’t get much bigger than Seattle hosting Minnesota. It’s the second straight year they’ve played on a Monday night in December in Seattle. This time both need the victory because of their division races. Seattle and Minnesota are on course for wild-card berths, but both would rather win their divisions and a victory on Monday could go a long way.