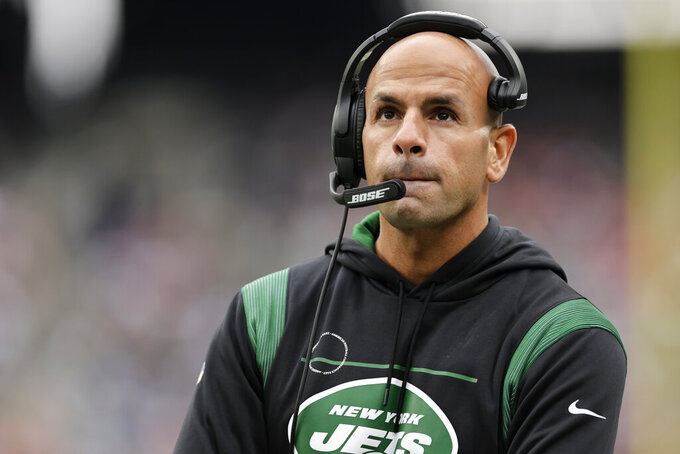 LAST SEASON: Robert Saleh's debut season as Jets coach was tough as the team navigated COVID-19, lots of injuries and a young, inexperienced roster, led by rookie quarterback Zach Wilson. Despite winning just four games, there were some positive vibes at the end of the season with Wilson's finish — no interceptions in his last five games. The No. 2 overall draft pick last year had a rocky start and then missed four games with a knee injury before coming back and playing mostly solid down the stretch. Offensive coordinator Mike LaFleur's system showed some potential to be explosive with rookie running back Michael Carter and wide receiver Elijah Moore possible key playmakers for years to come. Jeff Ulbrich's defense struggled mightily, finishing last or among the worst in the NFL in several key categories. Injuries decimated the unit, particularly at safety and linebacker. Wide receiver Braxton Berrios was a surprising bright spot while earning his first All-Pro selection as a kick returner.

OUTLOOK: After resetting the roster last offseason with Saleh as the team's new coach, GM Joe Douglas has nine draft picks this year — including two in the top 10 for the first time in franchise history. The Jets also have four of the first 38 selections. They're are banking on Wilson taking a big step forward in his second season and they've surrounded him with more playmakers and protection in free agency. New York still has plenty of needs entering the draft and Douglas could play it a number of ways. The Jets could stick with their two picks at Nos. 4 and 10 and get potential immediate starters at cornerback (Gardner), edge rusher (Walker or Thibodeaux) or even on the offensive line with Ekwonu or Alabama's Evan Neal. Douglas has made it clear New York is in the market for a No. 1-type wide receiver — as shown by the failed deal for Tyreek Hill — so trading a first-round pick for an established veteran could be in play. If the Jets stay put at No. 10, USC's Drake London or Ohio State's Garrett Wilson would be enticing.