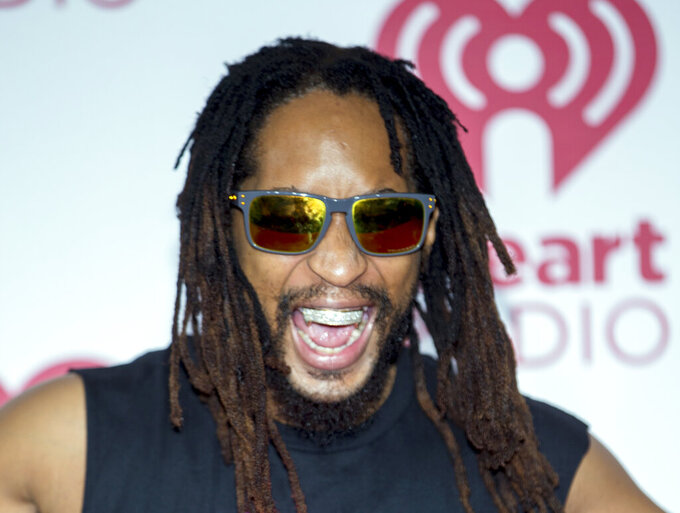 FILE - In this Sept. 20, 2014, file photo, Lil Jon arrives at the iHeart Radio Music Festival at The MGM Grand Garden Arena in Las Vegas. Lil Jon says he understands Maroon 5’s decision to cancel its news conference to discuss the band’s Super Bowl halftime performance with reporters. Maroon 5, with frontman Adam Levine, was supposed to speak with the media Thursday, Jan. 31, 2019, to promote their Super Bowl 53 appearance, but decided to cancel and let their “show do the talking.” (Photo by Andrew Estey/Invision/AP, File)

Maroon 5, with frontman Adam Levine, was supposed to speak with the media Thursday to promote their Super Bowl 53 appearance, but decided to cancel and let their "show do the talking."

"When you come in and just want to give a great show, but you got all of these other distractions, it's like 'Let's not talk about it.' Let's deal with the show," Lil Jon told The Associated Press after his performance at the Pepsi Brunch Party on Thursday. "Let people see the show. So, I get it."

Maroon 5 did not give a reason for its decision to forgo the press conference, which most halftime acts have participated in. However, it comes as some entertainers have said social injustice needs to be addressed during the Super Bowl.

The band will be joined by Big Boi of Outkast and rapper Travis Scott at halftime of the game between the Los Angeles Rams and New England Patriots.

Former NFL quarterback Colin Kaepernick helped start a wave of protests by kneeling during the national anthem to raise awareness to police brutality, racial inequality and other social issues.

"It just a lot going on around this Super Bowl, the music and halftime show, so maybe they just don't want to deal with that and just want the people to see the show," Jon told The Associated Press.

Lil Jon will star in Pepsi's Super Bowl commercial with Steve Carell and Cardi B. The Atlanta-based producer will also be one of the featured performers at NBA legend Shaquille O'Neal's "Shaq's Fun House" music event Friday including performances by Migos, Diplo and Tiesto.

He said he wants to represent his hometown city of Atlanta and show off his craft.

"This is my city," he said. "I'm born and raised here. It's an opportunity to come and see why we take so much pride in this city. This city is majority African-American. Black mayor, black police chief. With the Super Bowl being here, we have to showcase our city."