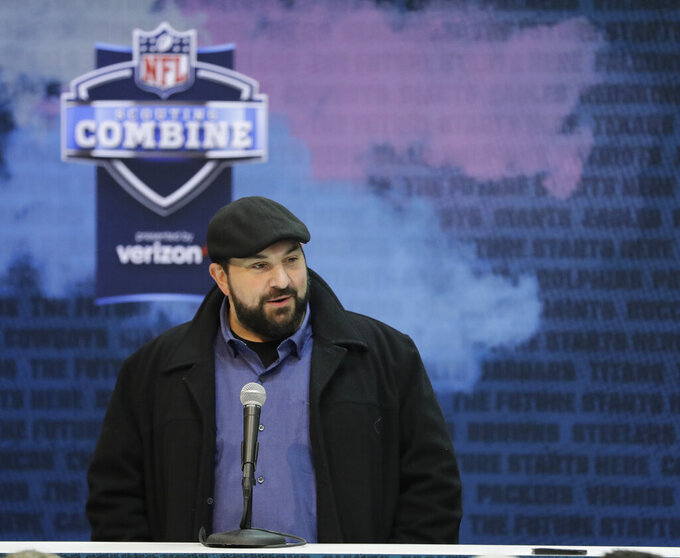 FILE - In this Feb. 27, 2019, file photo, Detroit Lions head coach Matt Patricia speaks during a press conference at the NFL football scouting combine, in Indianapolis. The Detroit Lions look like they need a tight end and a receiver early in the three-day NFL draft after largely ignoring both positions in recent years. (AP Photo/Darron Cummings, File)

ALLEN PARK, Mich. (AP) — As far as Detroit general manager Bob Quinn is concerned, the Lions needed to pounce once they found a linebacker they liked.

The Lions drafted Hawaii linebacker Jahlani Tavai in the second round of the NFL draft Friday night, then traded up to pick Boston College defensive back Will Harris in the third. Tavai is second on Hawaii's career list in tackles and was on preseason watch lists last year for the Bronko Nagurski and Butkus awards. He averaged 10.2 tackles a game, but a shoulder injury cut his 2018 season short, and he played in only eight games.

"Shoulder's doing great," Tavai said. "I'm just getting excited to be able to get into pads again."

In 2017, he started all 12 games at middle linebacker and ranked 10th nationally in tackles.

Detroit took the 250-pound Tavai with the 43rd pick — the highest a Hawaii player has been drafted since Tennessee took defensive end Travis LaBoy at No. 42 in 2004.

An NFL.com analyst projected Tavai to go in the fourth or fifth round , and Detroit's pick in the first half of the second round was a bit of a surprise. The Lions took tight end T.J. Hockenson in the first round Thursday night.

Quinn said the Lions had been targeting Tavai since as early as October.

"We like thick, built linebackers," Quinn said. "Really thick guys that can kind of take on blocks, but then when they play on the edge, they have enough playing strength and enough arm length to set the edge."

In addition to being a football standout, Tavai has also been an impressive rugby player and was named to an Under-18 U.S. national team.

"Big thing with rugby, especially in sevens, is learning how to make a better tackle in the open field," Tavai said. "So that was one thing that really helped me in football."

The last time the Lions took a linebacker in the draft was 2017, when they selected Jarrad Davis in the first round and Jalen Reeves-Maybin in the fourth.

The Lions took Harris with the 81st pick, which they acquired from Minnesota in exchange for a third-rounder and a sixth-rounder. A four-year player at Boston College, Harris was a starter since late in his freshman season and earned third-team All-ACC honors as a senior.

Quinn used to work for the New England Patriots, and he said he has plenty of contacts on the staff at Boston College, where Harris played.

"I know a bunch of staff members just for, honestly, probably 15 or 20 years. You go there, and Boston College had a pretty good list of prospects this year," Quinn said. "Really, the first guy that a lot of guys mentioned to me was (Harris)."

Harris' father Will, a receiver at Mississippi State, was drafted by Buffalo in the seventh round in 1993.

"He's been there every step of the way. He's been my coach growing up, my trainer, my mentor," Harris said. "It meant the world for me for him to be here and see our culmination of work. ... This is the best day of my life."