Los Angeles Rams' pass defense off to another strong start 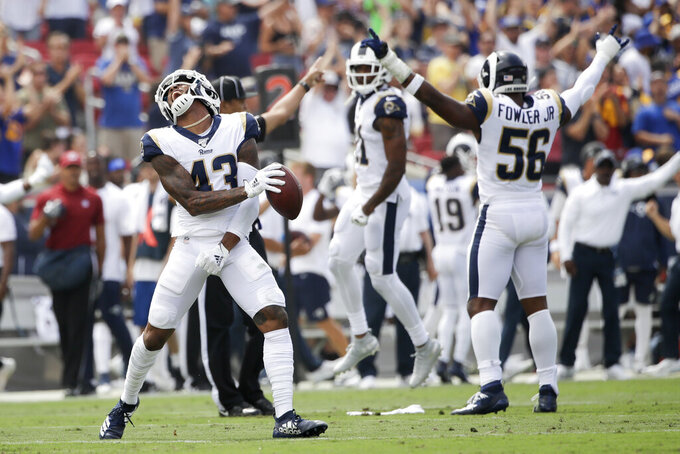 "I mean, we already know what (Beckham) can do, but that was crazy," Rams safety John Johnson said after watching Beckham's catch against the Jets. "I really liked the throw, too."

When they get an in-person look at Beckham, Baker Mayfield and the Cleveland Browns (1-1) this weekend, the Rams' (2-0) defensive backs are hoping to keep up their strong start to the season with another shutdown game.

And if they give up any big plays in Cleveland, they don't plan to let it distract them from their goal of another strong season for a relatively unsung section of the defending NFC champions' defense.

"Any cornerback will tell you, it's all about the next play, the next play," Nickell Robey-Coleman said. "We'll just play the best defense we can play, and at the end of the day, Odell Beckham is still going to do something like that. We just have to move on."

Not many opponents have done something like that lately to the Rams. After capping three straight strong playoff games by holding Tom Brady to 262 yards and no touchdowns in an otherwise miserable Super Bowl for Los Angeles, the Rams are off to a superb start in passing defense again over the first two games of this season.

Los Angeles has allowed an NFL-low one reception longer than 20 yards, and opponents are managing just 5.52 yards per reception — third fewest in the league. The Rams and Patriots are the only teams that haven't allowed a touchdown pass.

The Rams are seventh in the league in yards passing allowed (201.5) even though they haven't trailed in a game, which means their opponents have been throwing the ball urgently while playing from behind in the second half. They've also got two interceptions and five sacks despite the offseason departures of nose tackle Ndamukong Suh and safety Lamarcus Joyner.

The pass defense got an inadvertent boost last week when Drew Brees injured his thumb in a collision with Aaron Donald's hand on the second series of the Rams' 27-9 win over New Orleans. Capable backup Teddy Bridgewater couldn't get the Saints into Los Angeles' end zone despite throwing 30 passes to Michael Thomas and a solid group of receivers.

"We've got great players," safety Eric Weddle said, citing Aqib Talib, Marcus Peters and Robey-Coleman as "three of the best cornerbacks in the league. We all can cover. We all can manipulate the defense. We all can run. And I think we have A.D. (Donald), the best player on defense in the league, playing on our side. It's a complete team effort. As a secondary, we strive to be the best. We know the quickest way to lose in this league is giving up long plays."

Weddle replaced Joyner in the secondary this season, and the veteran is calling the signals for the passing game. Weddle says there's no single reason for the Rams' solid start on defense, but his teammates are already giving him credit for keeping them organized and focused.

Beckham and Mayfield have meant another long week of work for the Rams' secondary, but Weddle believes the Rams can hold their own.

"He's amazing, but every week the receivers are good," Weddle said. "If we sleep on a receiver, we're going to get torched. Odell is a special talent, but we don't take anyone for granted. Obviously he draws a little more attention because of the type of player he is and the success he's had over his career. Schematically, yeah, you change a little bit of your stuff, but I'm not losing sleep at night thinking about how we're going to guard him. We've got great players and a great system. We'll go out and play. We present as much challenge as they present to us."

NOTES: Two offensive starters missed practice, and their availability for Sunday is in serious doubt. Tight end Tyler Higbee has a chest bruise, and right guard Austin Blythe has a low left ankle sprain. Coach Sean McVay didn't completely rule out either player for Cleveland, however. Running back Malcolm Brown was limited in practice because of an ankle injury, and Donald also was limited with a back problem. ... McVay didn't confirm Jamil Demby would join the starting offensive line if Blythe can't play, as expected, although he said Demby "did a nice job" filling in against the Saints.