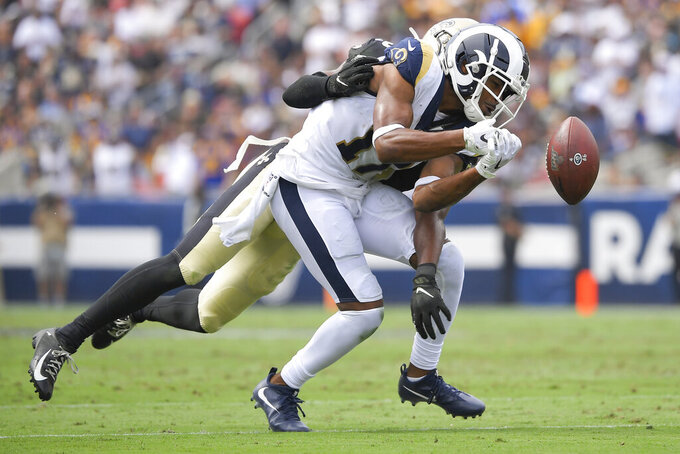 Since McVay calls all of the Rams' plays himself, he feels pretty confident his target will take the criticism in the right way.

"We had some patches in there offensively where we didn't finish in the red zone, and there were some really poor decisions on my part that really there's no excuse (for)," McVay said. "There were just poor decisions, especially on the third down when we end up throwing the screen to (tight end) Gerald (Everett). That's a bad design, bad idea. There's really no way of running around that one."

Once McVay finishes critiquing himself, he'll get back to work unlocking the potential resting in a team that has scored 57 points and played strong defense during a 2-0 start to the season.

McVay is already imagining what the Rams can do once their high-powered offense gets back into top form. Although the Rams have plenty to work on, they still haven't trailed this season.

Jared Goff's passing game hasn't blown up yet, failing to crack 270 yards in either game. While Goff has done enough to win both games, McVay expects more from an offense that racked up two of the most prolific seasons in NFL history to start his tenure.

In fact, the Rams got more than half of their 265 yards passing last Sunday on only two big plays: Brandin Cooks' spectacular over-the-head catch and Cooper Kupp's even-more-spectacular catch and run .

"I've never caught something that long or that far down the field," McVay said with a laugh. "For Brandin to be able to find that ball, accelerate — and then you can see he actually caught the back tip of that, and then brought it back in before he went to the ground. Because if he didn't kind of regather it on his way down, it probably would have been one of those when it hits the ground it actually comes out. A lot of good things."

The Los Angeles defense is off to a superb start despite facing Cam Newton and the high-powered Saints in back-to-back weeks. The Rams are fifth in the NFL with just 293.5 yards per game allowed, and their pass defense is rated sixth in the league. Los Angeles and New England are the only teams that didn't allow a touchdown pass in the first two weeks of the season, and the Rams have allowed just one pass play longer than 20 yards — fewest in the NFL.

The offensive line will need every possible minute to prepare for a near future with three untested starters. Right guard Austin Blythe has a sprained left ankle, which could mean sixth-round pick Jamil Demby, who was waived and re-signed by Los Angeles last season, will make his first career start next to fellow second-year pros Bryan Allen and Joe Noteboom. No starting offensive lineman has missed a game due to injury in McVay's tenure in Los Angeles, but that could change this week.

Kupp has seamlessly reassumed a prominent role in the Rams' offense after missing the second half of last season with injury. He led Los Angeles with five catches for 120 yards against the Saints, and Goff targeted him nine times — three more than he targeted Cooks and Robert Woods combined.

Woods was targeted only twice — down from 13 targets in Week 1 — and made just one jet sweep run against the Saints. He also had a 14-yard TD reception that was called back by a dubious illegal block penalty on Noteboom. Woods has been an invaluable component of McVay's offense, and it's nearly certain the Rams will work to get the dependable wideout more involved in the upcoming weeks.

Blythe said his injury is a low ankle sprain, calling it a "best-case scenario" and "good news." He doesn't know how long he'll be out, but he's not even sure whether he'll have to miss the next game. TE Tyler Higbee left the game with a bruised lung that left him coughing up blood, but his condition is improving, McVay said. The Rams don't know how long Higbee will be out, either.

2: The number of games this season in which the Rams' defense has forced a turnover on the opening drive. After linebacker Cory Littleton forced and recovered a fumble at Carolina, safety John Johnson intercepted a deflected pass by Drew Brees. McVay loves the tone-setting nature of this habit. The Rams have four takeaways in their first two games.

The first of at least five prime-time games for the defending NFC champions when they travel to Cleveland for a Sunday night showdown with the improved Browns. The Rams' early schedule looked fairly tough on paper, and this jaunt to Ohio will be their second long road trip already. Another win would put the Rams on course for a shot at matching last year's 8-0 start.