Murray throws for 2 TDs, runs for 2 as Cardinals beat Bears 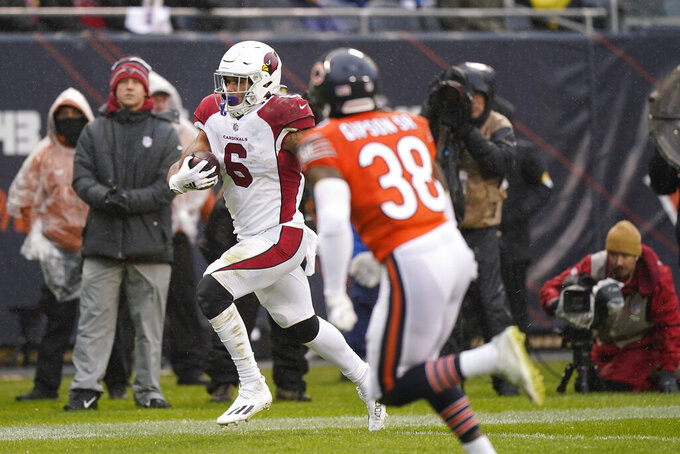 Arizona Cardinals running back James Conner runs to the end zone for a touchdown as Chicago Bears safety Tashaun Gipson pursues during the first half of an NFL football game against the Chicago Bears Sunday, Dec. 5, 2021, in Chicago. (AP Photo/Nam Y. Huh) 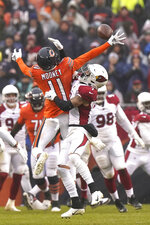 CHICAGO (AP) — Kyler Murray was in prime position following an interception on the game's opening possession. He fumbled his first snap.

Good thing for him, he made the recovery. Three plays later, he celebrated a touchdown pass to DeAndre Hopkins. And just like that, the Arizona Cardinals were on the way to another easy road win.

Murray threw for two touchdowns and ran for two more in his return from an ankle injury, and the Cardinals beat the struggling Chicago Bears 33-22 on Sunday.

The Cardinals (10-2) got back Murray and three-time All-Pro receiver Hopkins after both players missed three games because of injuries, then rolled to an easy victory over Chicago (4-8). The NFC West leaders, who have the NFL's best record, intercepted Andy Dalton four times.

“A couple of months before the season, if you'd say ‘if you had this opportunity' yeah, we'd definitely take it," Murray said. “This is all the hard work we've put in. We understand what kind of guys we have in the locker room. We understood what we had before the season started. It was just about going and doing it and executing."

The Cardinals, who were coming off a bye, improved to 7-0 on the road, with each win by 10 points or more.

Jalen Thompson and Budda Baker picked off passes that deflected off the intended target on Chicago’s first two possessions. The Cardinals took advantage, with Murray connecting with Hopkins for a 20-yarder and scrambling 9 yards to the end zone. He also threw a 21-yard TD to James Conner in the second quarter to make it 21-7, sending Chicago to its sixth loss in seven games.

“They understand that it’s OK to be upset, it’s OK to be frustrated after a game, there’s a lot of emotions,” Bears coach Matt Nagy said. “We all want to play better and coach better, they know that. But it is, in these times, you wanna make sure that these guys are understanding that it’s our job, our obligation, to make sure we give it everything we got.”

Murray also joined Cam Newton as the only players in NFL history with at least 10,000 yards passing and 1,500 rushing in his first three seasons.

“We knew it'd be grindy, wet, windy, cold,” coach Kliff Kingsbury said. “But I thought our defense played tremendous, creating those takeaways, giving us short fields on offense. We were able to capitalize a few times. Disjointed offensively, we didn't play as well we probably could have. Couldn't throw it as well as we would have liked. But I'm proud of the effort, proud that we got the win.”

The Bears were hoping to build on a last-second Thanksgiving win at Detroit. Instead, it was an all-too-familiar result for them.

Dalton, making his second straight start with Justin Fields sidelined because of broken ribs, matched a career high for interceptions. He injured his left hand trying to make a tackle after getting picked off a second time.

Dalton said he didn't think it affected his throwing, though he will have it checked out this week. He was 26 of 41 for 229 yards and two touchdowns.

The early interceptions by Thompson and Baker helped put Arizona in control.

Murray and Hopkins connected for a 20-yard touchdown on fourth down after Thompson picked off a short pass in Chicago territory that deflected off receiver Jakeem Grant's hands.

The Bears were threatening on their next possession, only to have Baker intercept a pass that hit off Cole Kmet's chest and return it 77 yards to the 15. That led to the 9-yard touchdown scramble by Murray to make it 14-0.

Chicago orchestrated a 77-yard drive that lasted nearly eight minutes, with David Montgomery scoring from the 1. But the Cardinals answered. Conner, aided by Xavier Crawford’s missed tackle, turned a short pass by Murray into a 23-yard touchdown to make it 21-7.

The teams did not report any injuries.