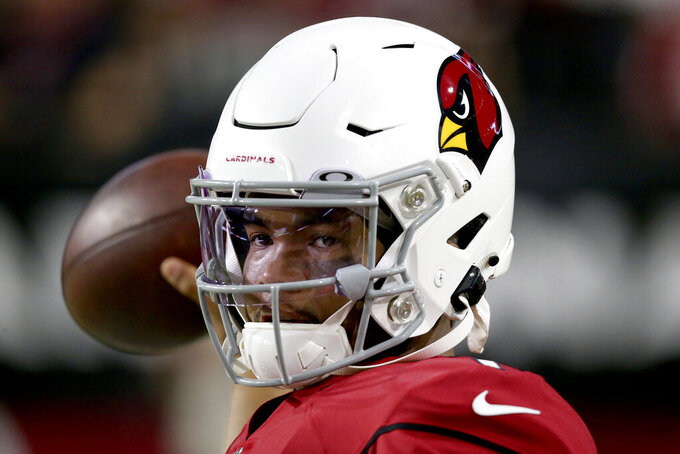 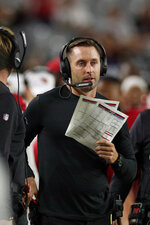 TEMPE, Ariz. (AP) — Arizona's first two preseason games might prove a microcosm of what's to come for the franchise in its first season with coach Kliff Kingsbury and quarterback Kyler Murray.

In the first contest, the up-tempo offense looked good . The coach was a genius. The quarterback a budding star.

In the second, nothing worked . Everyone suddenly looked like a loser.

Considering how bad things were one year ago during a dreadful 3-13 season, Cardinals fans will probably take something in between those two results. The 40-year-old Kingsbury says he's ready for the ups and downs that will almost certainly come with a rebuilding project.

"I stay pretty even-keeled throughout this process," Kingsbury said. "I understand what we are trying to accomplish and where we are at. We are trying to get better every day."

If nothing else, the Cardinals figure to be interesting.

First off, there's Kingsbury, who is trying to bring a college-style, rapid-fire offense with lots of quick passes.

Then there's Murray, the No. 1 overall draft pick out of Oklahoma who is just 5-foot-10, but has shown impressive arm strength and quickness. Murray's surrounded by several playmakers, including running back David Johnson and receivers Larry Fitzgerald and Christian Kirk.

"I like the pieces that are in place," Kingsbury said. "This offense, when we get rolling, there's a lot of flexibility to it."

Arizona's defense hopes to be much improved after being among the worst in the league last year, especially against the run. The Cardinals added linebackers Terrell Suggs and Jordan Hicks, who will each have important roles in the team's 3-4 scheme.

Here are a few more things to watch as the Cardinals transition to the Kingsbury/Murray era:

Then the team's other projected starting cornerback Robert Alford went down in a preseason game and is expected to miss significant time. Now the Cardinals will be relying heavily on Tramaine Brock, Chris Jones and rookie Byron Murphy.

"I think we have the guys in our group that can pick up the slack until I get back at least, but if we have to pick up someone, I'm quite sure (general manager) Steve (Keim) and coach Vance (Joseph) and Kliff will do whatever we need to do to help this team," Peterson said.

Arizona is willing to bet Terrell Suggs still has something left in the tank after 16 seasons of playing for the Baltimore Ravens. Suggs, who will turn 37 in October, signed a one-year deal with the Cardinals. He played in college at Arizona State.

Suggs was still a productive player in 2018, finishing the season with 13 tackles for a loss, including seven sacks.

David Johnson had 940 yards rushing and 446 yards receiving last year on an offense that wasn't any good. If the Cardinals can get it going through the air with Murray, there's a great chance Johnson can put up better numbers on the ground and in the passing game.

"It's probably the most fresh I've ever felt," the 27-year-old Johnson said. "Body feels great, mind feels great. Kliff has done a great job of keeping us relaxed, and when we have our down time, guys are doing everything they can to keep their bodies fresh. Especially as an offense, I feel like everyone's learning the offense really well."

The first four weeks of the season will go a long way toward deciding how Arizona will fare. It's not an easy stretch, but three of the four games are at home against Detroit, Seattle and Carolina. The only road game is at Baltimore.

Arizona had the league's worst run defense last season, giving up nearly 155 yards per game. There have been some shaky moments in both preseason games, but defensive lineman Corey Peters says it's too early to judge.

"This year has nothing to do with last year. It's a new system, a lot of new players, everything's different," Peters said. "I don't really see any correlation between what happened last year and what's happening this year. But it is something that we need to get corrected and address, and I'm hopeful that we'll do that moving forward."