NFL 2019: Rams wary of pitfalls on road to title redemption 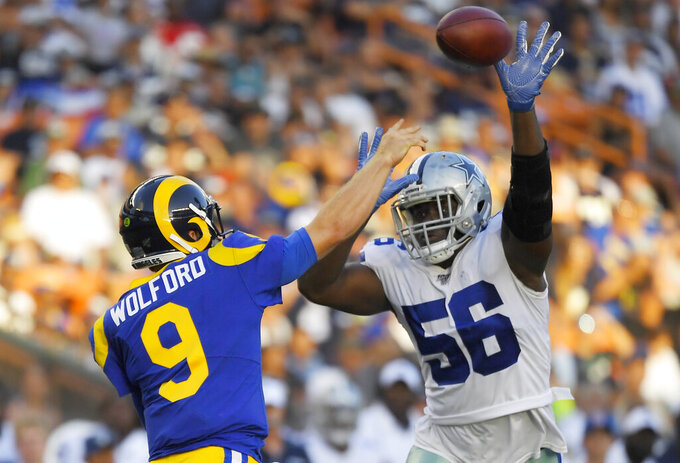 LOS ANGELES (AP) — That 13-3 loss in the Super Bowl looms large over the Los Angeles Rams. Their high-scoring ascent to the NFL's elite over two thrilling seasons somehow culminated in one of the most lifeless offensive performances in big game history.

It's the last thing anybody expected from a team coached by Sean McVay, who masterminded the Rams' rise with innovative thinking at every turn — until Bill Belichick's sturdy old defense had an answer for everything.

The youngest NFL coach ever to win a playoff game thinks a whole lot more about the last one he lost. Redemption for McVay and quarterback Jared Goff starts next month when the Rams resume their championship chase.

"We can build on a lot of things going into this season, and what we've been able to do over the last couple of years in developing a foundation," McVay said. "But our players know you earn it every day in this league. All we can do is learn from last year, but we've got to produce right now."

The Rams have won 24 regular-season games, two division titles and an NFC championship in the brief time since McVay took over a franchise with 13 consecutive non-winning seasons. Los Angeles returns with many reasons to think it can stay on top, but enough potential concerns to keep players and coaches sharp.

"I think it just makes us that much more hungry," cornerback Marcus Peters said. "We see exactly where we can be at if we just put our focus into getting better every day. Put the hard work in, and it will pay off for us."

Clay Matthews didn't join his hometown team until a few months ago, so he'll carry nothing from that disappointment in Atlanta into this season. And from what he's seen of the Rams so far, the six-time Pro Bowl linebacker won't be surprised if he gets to play for his second championship ring this season.

"There's so much talent around here," Matthews said. "There's just a level of talent that we should be able to put something together and do something special. I can't speak on behalf of any hangover or curse, or whatever you like to call it. But this team looks primed and ready to make another run at it."

The Rams didn't add a wealth of proven veterans to their roster, but they also didn't lose a tremendous amount of talent. McVay and general manager Les Snead are counting on Aaron Donald, Todd Gurley, Brandin Cooks, Robert Woods and Andrew Whitworth to remain among the NFL's best at their respective jobs, and they plan to fill any gaps with coaching, effort and their veteran leadership.

"We're just excited to get going back to where we ended last year," Gurley said.

Here are more things to know about the Rams:

TIME TO GET PAID

Goff and Peters are likely playing to determine the largesse of their next contracts. Goff is in the fourth season of his five-year rookie deal. The Rams have repeatedly said they will sign him to a long-term contract, and his 19-for-38 performance in the Super Bowl didn't alter that plan. Peters is in the final year of his rookie deal, but said he never considered holding out.

Matthews and safety Eric Weddle joined the defense, but they're the only veteran newcomers likely to make an impact; another addition is backup quarterback Blake Bortles. The Rams also didn't make a first-round pick for the third straight year, but rookies including defensive back Taylor Rapp and nose tackle Greg Gaines could play early.

The Rams are taking their biggest risk on the offensive line, where untested second-year pros Joseph Noteboom and Brian Allen got the jobs of departed stalwarts Rodger Saffold and John Sullivan. LA had remarkable line consistency for two years, but McVay seems supremely confident in the newcomers.

Donald participated in his first training camp since 2016, no longer holding out to get the huge contract he finally received. The Rams will need the back-to-back AP Defensive Player of the Year in elite form from the start because he has lost the help of nose tackle Ndamukong Suh, who left as a free agent and essentially wasn't replaced. Donald's life of constant double-teams is unlikely to improve, but he's used to it.

The Rams haven't gone into detail about the condition of Gurley's knee, which limited him down the stretch and allowed the since-departed C.J. Anderson to revive his career. Gurley and the Rams actually might be better off if he isn't among the NFL's top five in touches this season, as he has been in each of the previous three years. Longtime backup Malcolm Brown should get more action, and Los Angeles used a third-round pick on Memphis' speedy Darrell Henderson to provide options for McVay. The Rams are determined to optimize Gurley's effectiveness in the final season before his four-year, $60 million contract extension begins.