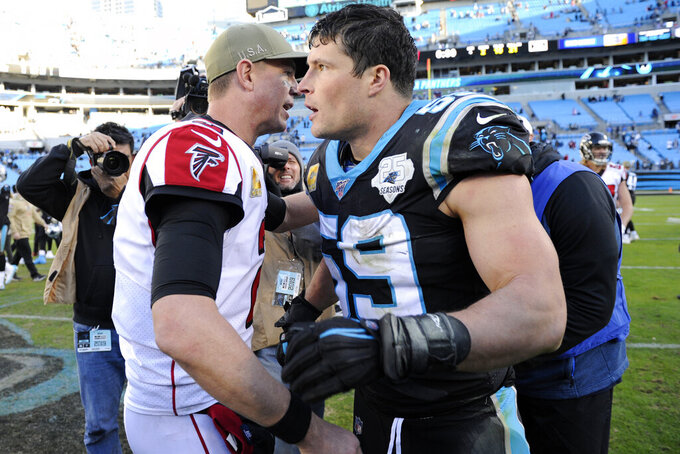 CHARLOTTE, N.C. (AP) — If things continue trending like this, the Carolina Panthers could be in for some major changes next offseason.

And those could potentially include players, coaches and front office personnel.

New Panthers owner David Tepper met with the media Monday for about an hour and said he will not stand for long-term mediocrity, something which has plagued the franchise for the last 25 years.

Carolina got drilled 29-3 at home over the weekend by an Atlanta Falcons team that had two wins coming in. The Panthers (5-5) were outplayed in every phase of the game, turning in a lackluster performance that sent fans at Bank of America Stadium streaming to the exits late in the third quarter.

Tepper wouldn’t speculate about the future of coach Ron Rivera and general manager Marty Hurney. But he made it clear the Carolina’s 145-148-1 record over 25 years is not acceptable.

As for Cam Newton, Tepper said there has been no decision on the quarterback’s long-term future with the team. Carolina could save $19 million under next year’s salary cap by releasing him or trading him, but Tepper said the organization will wait to see if Newton is able to recovery from injuries.

Ideally, he would like Newton to get healthy and remain with the Panthers, calling him one of the best QBs ever.

Panthers tight end Greg Olsen described Sunday as a “comedy of terrible football,” and he couldn’t have been more spot on. And it came in a game Carolina absolutely had to have.

The Panthers have now lost three of their past four and find themselves three games behind the Saints (8-2) in the NFC South and 2 ½ behind the Vikings (8-3) in the race for the second wild-card spot with six games remaining. If those numbers aren’t daunting enough, check out the remaining schedule, which includes two games against the Saints, and one each against the Seahawks (8-2) and Colts (6-4). Oh, and they have to play the Falcons again, too.

Rivera is a two-time NFL Coach of the Year and has a history of rallying his team when things look bleakest. But this won’t be easy, particularly with Newton on injured reserve and his replacement, Kyle Allen, still doing on-the-job training and struggling with turnovers.

Olsen said there is still time to salvage the season.

“We’ve shown over the years we are pretty resilient, and we don’t have any quit,” Olsen said. “We don’t have any guys who pack it in, and we have guys who see this thing through to the end.”

Giving Christian McCaffrey the football — repeatedly. McCaffrey never disappoints, and he continues to be the team’s most reliable and productive player. Unfortunately for the Panthers, it’s beginning to look like his MVP-type season will go to waste with the team facing an uphill battle to the playoffs. McCaffrey had 191 yards from scrimmage against the Falcons, marking the eighth time this season he has totaled more than 140 yards from scrimmage and the fifth time he’s eclipsed 175 in a game. McCaffrey not only leads the NFL in yards from scrimmage (1,576) but is also first in rushing (1,059) and touchdowns (13).

Allen’s decision making. The second-year quarterback has fallen on hard times recently. After winning his first five career starts, Allen has lost three of his last four starts and thrown nine interceptions during that span. Rivera understands there are going to be growing pains with a young quarterback and his support of Allen hasn’t wavered. “I’m not concerned about Kyle’s learning curve,” Rivera said. “... He’s a young quarterback who is going to make young mistakes. But that is why you put him out there. We’re going to live with his learning pains because that is what the game is all about.”

Safety Tre Boston. Boston got beaten on one route early but made up for it later in the same drive with two nice plays, including one ferocious tackle on wide receiver Christian Blake. Later in the game, Boston broke up a sure touchdown pass by ripping the ball out of Russell Gage’s hands at the last second.

The Panthers escaped the Falcons game without any injuries, although Allen certainly took a beating in the pocket.

3: Carolina’s first three drives against the Falcons ended in an interception, a sack and another sack. In between, the special teams gave up a 78-yard punt return for a touchdown. That’s no way to start a game.

Things only get more difficult from here for the Panthers, who face the Saints in New Orleans on Sunday.