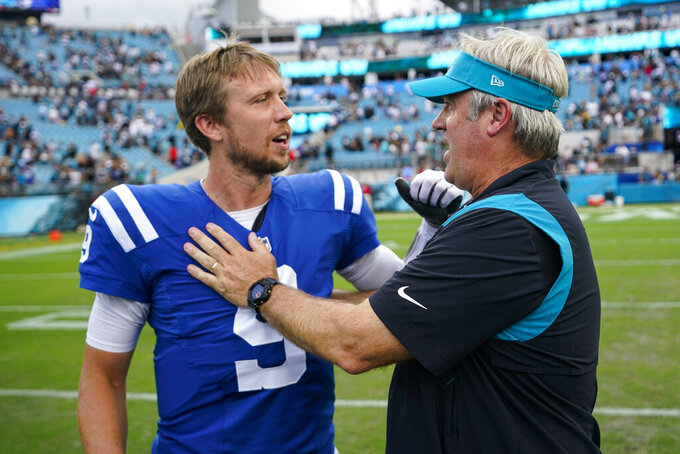 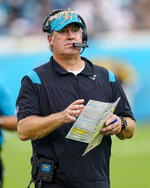 PHILADELPHIA (AP) — Years passed in Philadelphia with sports fans around the globe howling, how could the city erect a statue of Rocky Balboa but not one for real boxing Hall of Famer and famous resident Joe Frazier?

The answer: The statue was nothing more than a movie prop left behind once “Rocky III” filming was finished so it could stand as a tourist attraction. No offense, Smokin’ Joe.

Why is a statue of Pederson and QB Nick Foles commemorating the most famous play in team history — and on the short list of great ones in Super Bowl lore — wedged in between gates in a hard-to-find spot across the street from Lincoln Financial Field? Because again, the 9-foot tall bronze statue that honored the trick play that won the Eagles their only Super Bowl was donated by a beer company and not bestowed from the franchise.

Eagles fans, though, love the spot. For selfies. For stories. For just seconds of a reminder of the time Foles ran to the sideline and asked Pederson “ You want Philly Philly?” and the coach said “Yeah, let’s do it.” Foles then caught a touchdown pass on fourth down and city light poles were never the same.

Pederson was fired less than three years after he led the Eagles to the Super Bowl win over the New England Patriots over a fractured relationship with the front office in decisions ranging from the rebuilding path to the draft to his relationships with star players. He had two years left on his contract when owner Jeffrey Lurie made the January 2021 decision to cut ties with Pederson. About 13 months later, Pederson was hired to help clean up the mess left behind in Jacksonville once Urban Meyer was fired after what will go down as one of the worst coaching tenures in NFL history.

Yo, Philly. Look who’s back.

Allen Iverson played here in a Denver Nuggets jersey. Andy Reid coached on the sideline for the Kansas City Chiefs. Eric Lindros showed up in a Rangers sweater.

Now here comes Pederson and the Jaguars at 2-1 -- not bad considering they had a league-low four wins combined the past two seasons -- and walking into what should be a happy homecoming for the 54-year-old coach.

How about a standing ovation?

“Hopefully something in that realm,” Pederson said. “But look, it’s Philly. Anything’s possible, right, with these fans? I’m just looking forward to running out of that tunnel with the Jaguars and getting ready to play a game there.”

Pederson went 42-37-1 in five seasons with the Eagles. He guided the Eagles to two division championships and three playoff appearances before going 4-11-1 in 2020. Lurie indicated after Pederson was fired the coach wasn’t on board with rebuilding. Pederson’s relationship with Carson Wentz also reached a boiling point once the QB was benched with four games left in the 2020 season for Jalen Hurts.

Pederson is gone. So is Wentz, who had a very bad day in his first game against the Eagles in a loss last weekend. Hurts, though, is still around and playing like an MVP as he has the Eagles off to a 3-0 start and dominant in every phase of the game.

“Everything that you’re seeing now is everything that we saw in him when we drafted him,” Pederson said. “You’re seeing the growth, not only in the quarterback, but also in the team. Some of the pieces around him. He’s going to defy all odds. That’s just the way his career has been built.”

Pederson insisted he could keep his emotions in check as he returns to the stadium that was the site of some of his greatest professional triumphs. He just wants to escape Philly with a win. He definitely won’t take a selfie at his statue.

“Maybe one day after I retire or something like that, but I have no plans to anytime soon,” Pederson said.

Jacksonville’s James Robinson has the longest two touchdown runs of any running back this season.

The third-year pro notched a 50-yard scoring run at the Los Angeles Chargers a week after logging a 37-yarder against Indianapolis.

Really good considering Robinson tore his left Achilles tendon in December. Those long TD runs, as well as his 230 yards on the ground, should be enough to prove he's fully recovered from the injury.

“If the past weeks doesn’t show, then I don’t know what people want,” he said.

This week, Sirianni showed video of Tiger Woods explaining how he always wanted to get better even when he was the top golfer in the world.

“We can learn so many good things from what not to do and what to do,” Sirianni said. “Last week, it was a Kobe Bryant film. This week, it was a Tiger Woods film of just how am I going to improve my swing today to make sure that I’m getting better even though I’m playing pretty good right now?"