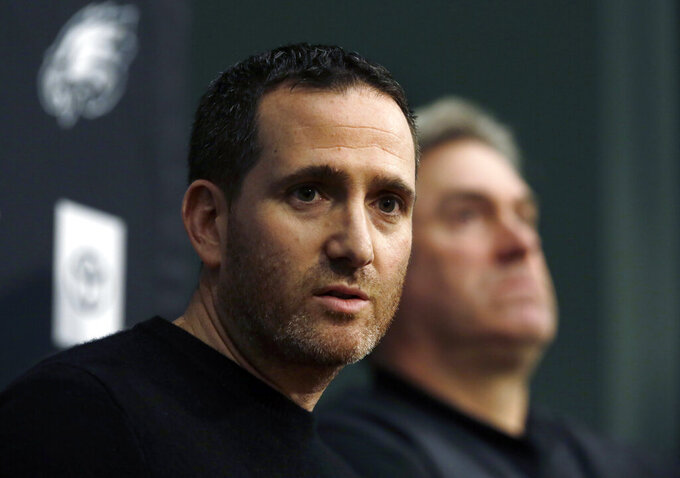 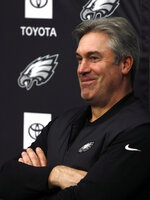 Wentz missed the final three games of the regular season and two playoff games because of a back injury. Nick Foles led Philadelphia to four straight wins and was 27 yards away from taking the Eagles to the NFC championship game before his final pass bounced off Alshon Jeffery's hands and was intercepted to seal a 20-14 victory for the New Orleans Saints.

"Yes, Carson is the quarterback going forward," Pederson said at the start of his season-ending news conference.

Foles filled in when Wentz tore two knee ligaments in December 2017 and led Philadelphia to its first NFL title since 1960, earning Super Bowl MVP honors in a win over New England.

Howie Roseman, the team's executive vice president of football operations, acknowledged it's going to be a difficult decision.

"We would love to keep Nick Foles," Roseman said. "You talk about a guy who we drafted here and we've grown incredibly close with. I don't know a team that wouldn't want to have Nick Foles on their roster. Certainly, as we go into the substance of those discussions, we haven't had them yet, but there is no question we love having Nick Foles as an Eagle in Philadelphia and we would love to keep him."

The Eagles must decide by mid-February if they want to exercise a $20 million option to keep Foles for 2019. But Foles could decline it and pay back $2 million to become a free agent. Philadelphia could put a franchise tag on Foles, though $23 million to $25 million is a hefty price for a backup. It's possible the Eagles could use the franchise or transition tag to trade Foles rather than allow him to walk away for only a compensation pick.

Foles said Monday having the option to become a free agent is "extremely important" to him.

"It always has to be what's best for our football team and the Philadelphia Eagles. We have to make decisions based on that," Roseman said. "There is also a respect factor for guys that have done a lot for us and been part of it. We try to factor that in as well, but the bottom line is we have to do what's best for our football team to help us win games going forward."

Wentz finished third in NFL MVP voting after leading the Eagles to an 11-2 record in 2017. He was 5-6 as a starter in 2018 but set career highs in passer rating and completion percentage.