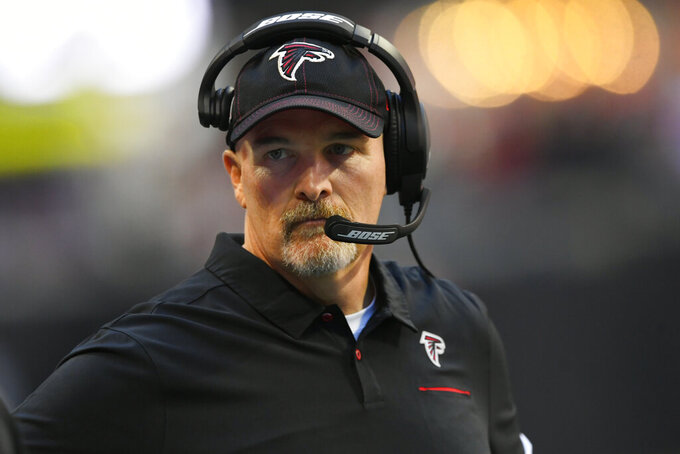 Atlanta Falcons head coach Dan Quinn stands on the sidelines during the first half of an NFL football game against the Seattle Seahawks, Sunday, Oct. 27, 2019, in Atlanta. (AP Photo/John Amis)

ATLANTA (AP) — Coach Dan Quinn hopes a few changes to his staff will spark a turnaround for the 1-7 Atlanta Falcons.

Coming off a bye week, Quinn had to do something with Atlanta riding a six-game losing streak. The Falcons have lost 12 of 16 since Week 9 last year.

Quinn stopped short of stepping down as defensive coordinator, but he made a notable move by switching receivers coach Raheem Morris to the secondary. Quinn is counting on Morris' defensive background to bring fresh insight to a unit that ranks last in sacks, third-down percentage and takeaways. The Falcons have allowed 31.2 points per game, the NFL's third-worst scoring average.

"Part of his strengths are communication in the secondary, and we felt that was a spot that needed our attention at this space," Quinn said Monday. "For us, it was all hands on deck, but you can imagine that's one of Rah's many powers — his ability to communicate — and we wanted to make sure from the technique side he'd bring fresh eyes over to the secondary and the communication space."

Quinn's decision last January to fire defensive coordinator Marquand Manuel and take over the position himself has backfired, though at the time it seemed plausible. Quinn was a successful coordinator with Seattle and did well when he took over defensive play-calling previously with Atlanta.

Instead, he has fielded questions over the past several weeks about whether he planned to have an assistant take charge as coordinator. Quinn responded that his "ego isn't bigger than the team" and not too long ago gave linebackers coach Jeff Ulbrich some of the play-calling responsibility.

Changing Morris' role owns up to that stance even more, and it's needed. The Falcons are often out of position in coverage and have allowed the NFL's second-worst passer rating.

Morris hasn't coached defense since 2015, but Quinn believes he has the teaching acumen to bridge the gap.

Quinn made two other moves, switching Dave Brock from running backs to receivers and returning Bernie Parmalee to running backs, a position he coached with Atlanta last year.

"We've got a lot of experience, and I thought no better way than to add to the strength of the staff than to add Raheem into the secondary and have some fresh guys on some new topics," Quinn said. "We started that today."

The Falcons lead the NFL in passing yards per game, and the air attack had no drop-off when 38-year-old Matt Schaub filled in for Matt Ryan two weeks ago. Ryan is expected to return for Sunday's game at New Orleans after a right ankle sprain caused him to miss his first start since 2009.

Quinn has tried to shore up the secondary and play-calling and now must find a way to fix the pass rush and create takeaways. That's going to be tough on Sunday for a unit that's forced just four all season. Even in their best seasons, the Falcons struggle against the Saints and have lost 18 of 27 games to quarterback Drew Brees and coach Sean Payton.

Tight end Austin Hooper has emerged as one of the league's best. He leads players at his position in catches and touchdowns and ranks second in yards receiving. Atlanta also will debut a new kicker, Younghoe Kim, and a new punter, Ryan Allen, this week.

Cornerback Isaiah Oliver, a second-round draft pick last year, hasn't delivered as a starter. Taking over after Robert Alford was released last year, Oliver still struggles to jam receivers inside the first 5 yards and is beaten on routes too often. The Falcons hope seven-year veteran cornerback Desmond Trufant can return this week from a toe injury and start on the left side. Rookie Kendall Sheffield, a fourth-round pick, could replace Oliver on the right side.

Rookie right guard Chris Lindstrom is eligible to return from injured reserve this week, but Quinn indicated he isn't ready. Lindstrom, the No. 14 overall draft pick, suffered a broken foot in the season-opening loss at Minnesota.

94 — Atlanta's point differential in the first half.

Falcons owner Arthur Blank promised to evaluate Quinn and the entire football operations during the bye week. Atlanta didn't make big changes, but at least it did something.