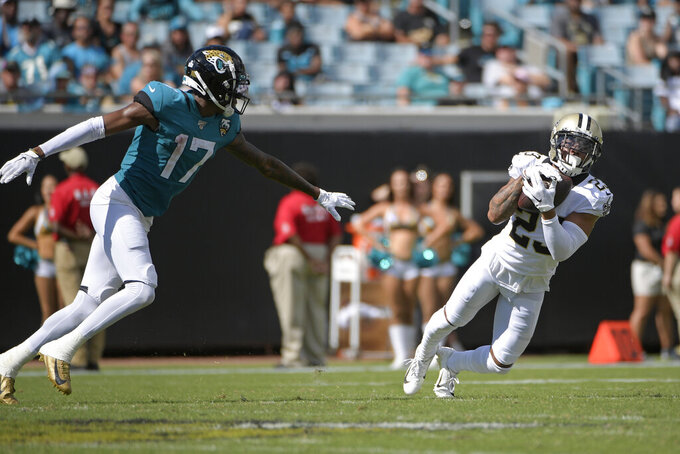 FILE - In this Oct. 13, 2019, file photo, New Orleans Saints cornerback Marshon Lattimore, right, intercepts a pass in front of Jacksonville Jaguars wide receiver D.J. Chark (17) during the second half of an NFL football game in Jacksonville, Fla. Lately, Lattimore hasn’t had to discuss many failures in pass coverage, even though he spends significant portions of every game covering opponents’ top receivers. His next challenge comes Sunday in Chicago, whose receiver corps is led by Allen Robinson. The last three receivers Lattimore covered--Jacksonville’s Chark, Tampa Bay’s Mike Evans and Dallas’ Amari Cooper--did little to help their teams in those games. (AP Photo/Phelan M. Ebenhack, File)

He'll castigate himself with the cameras on when he doesn't play well. He'll even volunteer when luck played a part in a big play he made, such as his first interception of the season last weekend.

"I needed that. It was like a gimme," Lattimore conceded after practice this week. "You don't get too many of those in this league, so I'll take it whenever I can get it."

Lately, Lattimore hasn't had to discuss many failures in pass coverage, even though he spends significant portions of every game covering opponents' top receivers. His next challenge comes Sunday in Chicago, whose receiving corps is led by Allen Robinson.

"That's my job. That's what I'm here for," Lattimore, a 2017 first-round draft choice, said of covering opponents' best receivers. "I just try my best to make sure they're not the reason they have potential to win the game."

Lattimore held Chark to three catches for 43 yards — 54 below his average. That was one week after not allowing Evans to make a single catch and limiting Cooper to 48 yards, with no receptions longer than 14.

Chicago's Robinson had seven catches for 97 and two TDs in his previous game in Week 5 and is coming off a bye. Bears coach Matt Nagy said he doesn't want to shy away from throwing to Robinson this week, but that his quarterback has to know that inaccurate or ill-timed throws likely will be punished.

Lattimore said that when he was giving up more yards and touchdowns earlier this season, it was partly because he would lose focus after quarterbacks went a number of plays in a row without throwing to his side of the field — a victim of his own success, in a way.

"They're not coming my way, but they end up catching me when I was sleeping out there," Lattimore recalled. "But that's when (secondary coach Aaron Glenn) came to me and said, 'Just play every play one play at a time so you can stay focused, stay locked in and be consistent.' So, that's what I did.

"Physically, I got everything I need," he added.

Lattimore was raised in the Cleveland area by a single mother who supported her three children by working in a nursing home. When he'd ask for an expensive pair of sneakers, instead of simply saying no, his mother, Felicia, showed him her paycheck and their bills and essentially had him do the math. He respected that, and decided that if he wanted luxury items, he needed to figure out how to get those on his own.

He also nearly quit football at age 14, when he said he struggled emotionally with the shooting death of a teenage cousin. He said he was lured back to the game by family and friends who recognized his talent and affinity for football.

And as Lattimore also concedes, "I didn't have a plan B."

He generally didn't play other sports, but did run track at high school coach Ted Ginn Sr.'s insistence. Lattimore said he didn't really enjoy it, and consequently wasn't great at it.

But playing cornerback is about much more than straight-line speed. It's about backpedaling before suddenly turning one's hips to run stride-for-stride with an accelerating receiver. It's about leverage, timing, play recognition and route recognition.

"He's always looking to make a play, hungry for the ball," said safety Vonn Bell. "He wants to be the best at his position."

Bell, who has known Lattimore since they were teammates at Ohio State, also said the cornerback's inclination to acknowledge his failures publicly is part of what makes him elite.

"That's what all great players do. They let you know they messed up and they're going to learn from it," Bell said. "That's what he does very well and he challenges himself and that's what makes him become great and makes him become that guy. He just puts his head down and works and then be performs at a high level."

Lattimore exhibits laid-back behavior in the locker room, welcoming conversation but rarely, if ever, raising his raspy voice.

He said he tries not to get too emotional about instances of success or failure, be it from play to play, or game to game.

"At corner, it's ups and downs and it's a long season. So I can't really get too happy about one win and one matchup," Lattimore said. "After the season, I can get happy about it."

At this rate, he'll enjoy his next offseason.

NOTES: Running back Alvin Kamara (knee/ankle), tight end Jared Cook (ankle) and receiver Tre'Quan Smith did not practice on Thursday after also sitting out on Wednesday.