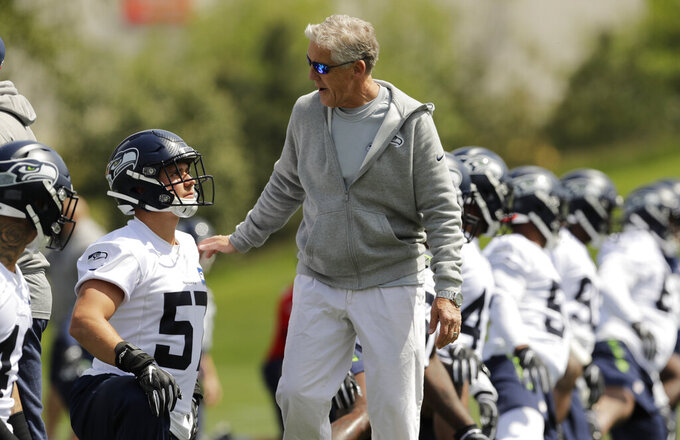 RENTON, Wash. (AP) — The comparisons began the night L.J. Collier became a first-round draft pick and have persisted since, including Friday when the Seattle Seahawks' rookie minicamp opened.

They go like this: if Collier develops the Seahawks could have found a new version of Michael Bennett. While that might not seem like a fair burden to place on Collier, the rookie from TCU selected with the 29th overall pick is embracing it.

"I think that's a great comparison because he can play outside, he can play in. He's a tough, hard-nosed guy," Collier said. "He loves to hit people. I like his style of play, his flexibility to go in and out, things like that. Obviously I can do that, too. That's why I see the comparison."

It's not that coach Pete Carroll or the Seahawks staff is trying to link what Bennett brought during his time in Seattle with what Collier is going to provide right away. But many of the characteristics that made Bennett such a disruptive player in Seattle are similar to what Collier showed in college.

Most notably, the Seahawks are certain they drafted a defensive end that can play multiple positions, especially in passing situations. Collier was a first-team All-Big 12 selection in his senior season after recording 42 tackles, 11 ½ tackles for loss, six sacks, and four pass breakups. He played in a rotation during his first three years at TCU before becoming a full-time starter as a senior.

"He has a style to his play that I was attracted to right off the bat. He plays with really good leverage, has really long arms and uses his hands really well. And you could see it in the walkthrough even, just his position and he has a sense for that," Carroll said. "That's a special characteristic that he already has. So technique-wise he's been coached very well also. There's stuff we can do with him. I think he's going to be a really exciting guy to fit into the scheme."

Collier was an unexpected first-round pick, with most draft analysts expecting him to be taken on the second day. True to form, Seattle defied convention and took Collier earlier as defensive linemen started disappearing from the draft board. Coming from the small town of Munday, Texas, Collier said it's been a whirlwind week of hearing from old friends, teachers and "some cousins I didn't really know."

But now his complete focus is on learning Seattle's defense as quickly as he can.

"If anything, it drives me to get better," he said. "The guys here are going to push me. They're going to help me get better. It doesn't put any pressure on me at all. I've lived with pressure my whole life. It just pushes me to go harder and play even better."

NOTES: Carroll said Seattle would like to keep RT Germain Ifedi around for the long-term even though the team declined the fifth-year option on the former first-rounder. "We're in the midst of trying to continue to fit the roster together and all that and the big demands, sometimes we can jump on it, sometimes we can't. ... This is not an indication of anything. We like the guy and hope he'll be with us for a long time." ... WRs Gary Jennings (fourth round) and John Ursua (seventh round) sat out the first day of camp with minor hamstring injuries. Jennings is likely to be out a couple of weeks while Ursua was pushing to take part in the weekend camp, Carroll said.