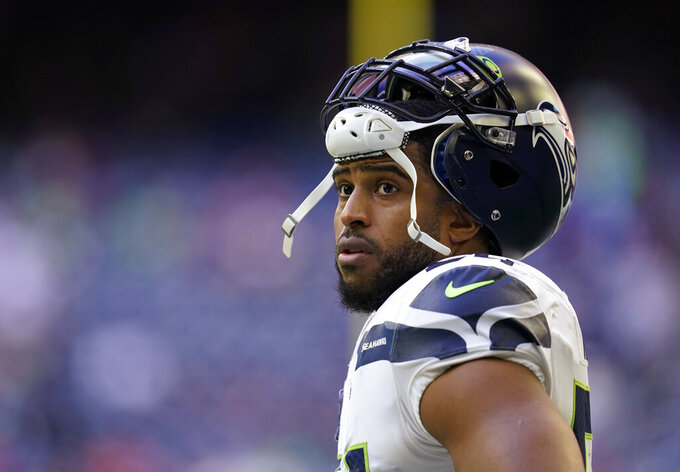 FILE - Seattle Seahawks linebacker Bobby Wagner pauses during the team's NFL football game against the Houston Texans on Dec. 12, 2021, in Houston. Wagner has been informed he is being released by Seattle. Wagner confirmed the news to The Associated Press on Tuesday night, March 8, 2022, hours after the team agreed to trade quarterback Russell Wilson to Denver. Seattle is expected to make Wagner's release official Wednesday. (AP Photo/Matt Patterson, File)

SEATTLE (AP) — Seahawks linebacker Bobby Wagner has been informed he is being released by Seattle.

Wagner confirmed the news to The Associated Press on Tuesday night, hours after the team agreed to trade quarterback Russell Wilson to Denver. Seattle is expected to make Wagner's release official Wednesday. ESPN first reported Wagner was being cut.

Wagner's departure isn't surprising but is another sign of the massive rebuild about to take place in Seattle.

Wagner, 31, is a six-time first-team All-Pro and likely a future Hall of Famer. But he carried a massive salary cap charge of $20.6 million for the 2022 season in the final year of his current contract. It was unlikely the Seahawks would bring Wagner back facing that large of a hit to the salary cap.

“We love playing with Bobby. He’s been a great player had another great season,” Seattle coach Pete Carroll said last week at the NFL Combine in Indianapolis. “You know at this time of year, there’s a lot of guys that are in a position where we got to figure out how everything fits together and Bobby has been such a steady part of it. We’d love to be able to play with him. So we’ll work toward that if we can.”

Wagner set a career-high in tackles last season with 170 but missed most of the final two games. Wagner suffered a knee injury in the opening moments of the Week 17 game against Detroit and missed the finale against Arizona.

At the end of the season, Wagner said he understood the situation with his salary for next season and that a move by the Seahawks was possible. He also said he intended to keep playing.

“You think about what the next year looks like and just what the future holds,” Wagner said in late December before the home finale. “This was a season that I don’t think we all planned for. We didn’t plan for the season to go this way, so obviously there’s going to be some changes. Whether or not I’m a part of those changes, I don’t know.”

Wagner was part of Seattle’s celebrated 2012 draft, selected in the second round out of Utah State. He was an instant starter and the anchor to one of the best defenses in recent memory. Wagner was named first-team All-Pro for the first time in 2014, a season he missed five games due to a toe injury. He was a first-team selection for five straight seasons beginning in 2016 and was a second-team selection last season.