Texans' offense stalls after halftime in 21-14 loss to Jets 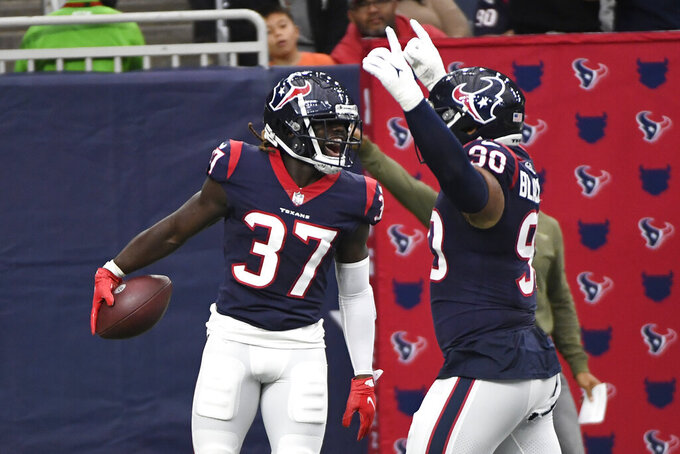 HOUSTON (AP) — Coming off an upset of Tennessee, the Houston Texans jumped out to a 14-3 lead over the New York Jets on Sunday and looked as though they were on the way to winning consecutive games for the first time this season.

Instead, their offense stalled in the second half and the Jets rallied for a 21-14 win to hand Houston (2-9) its ninth loss in 10 games.

The Texans trailed 3-0 after the Jets made a field goal after an interception by Tyrod Taylor. The veteran quarterback got on track after that, throwing touchdown passes on consecutive drives in the second quarter to put the Texans up 14-3.

He connected with rookie Brevin Jordan on a 13-yard score first and later threw a perfect 40-yard strike to Brandin Cooks in the end zone to build the lead.

But Taylor and Houston’s offense were unable to do anything after that and punted on their next four possessions before missing a field goal with about 10 minutes left.

Despite this lackluster performance, the Texans were just seven points behind when they got the ball back with about 3 ½ minutes to go. But Bryce Hall knocked down a pass intended for Nico Collins on fourth-and-2 to give New York the ball back.

The Jets worked the clock down and the Texans didn’t get the ball again until there were just 20 seconds left.

The Texans gained 157 yards before halftime, but managed just 45 the rest of the way.

“We didn’t execute on third down,” Taylor said. “We didn’t execute in general early downs as well. When you put yourself in third-and-long, those are hard to come by. The flow wasn’t right in the second half and we have to be better at that moving forward.”

While Houston’s offense was the biggest problem in the second half, the defense was unhappy it couldn’t close things out after starting strong.

“It’s been the same thing all year, our ability to finish has just not been there,” linebacker Kamu Grugier-Hill said. “I don’t know what it is. Game after game, we get put in these positions and we just can’t finish so we’ve got to figure it out.”

The Texans played without top defensive player safety Justin Reid, who was inactive because of a coach’s decision related to a violation of team rules. Culley wouldn’t provide any details as to what led to the suspension and wouldn’t say if Reid would return next week.

He did address what message suspending a player of Reid’s caliber sends to the rest of the team as Culley, who is in his first year as a head coach, tries to build a winning culture in Houston.

“We have rules and when the rules are broken, we make decisions and we do those (suspensions),” Culley said. “It doesn’t matter who it is.”

After another difficult loss in a season full of them, Culley was asked about his message to the team moving forward.

“The only thing that matters is the next game," he said. “The next game is the Colts and we're just looking to go out and try to get things switched around again and get the win."

By Joe Reedy an hour ago
By Dave Campbell 3 hrs ago
By Dennis Waszak Jr. 4 hrs ago
6 hrs ago
7 hrs ago