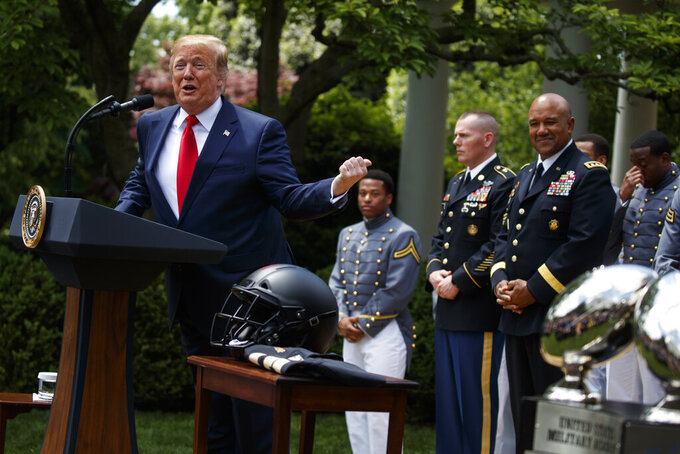 President Donald Trump speaks during the presentation of the Commander-in-Chief's Trophy to the U.S. Military Academy at West Point football team, in the Rose Garden of the White House, Monday, May 6, 2019, in Washington. (AP Photo/Evan Vucci)

WASHINGTON (AP) — President Donald Trump said Monday he is looking into offering a waiver that would allow athletes attending the nation's military academies to play professional sports immediately upon graduation.

Trump made the announcement Monday while presenting the Commander-in-Chief's Trophy to the U.S. Military Academy football team during a Rose Garden ceremony. The Army Black Knights completed an 11-2 season, including wins over the Air Force and Navy. Army earned the trophy for the second consecutive year.

Trump said that, under the plan he envisions, athletes would "serve their time after they're finished with professional sports." He said that should make recruiting a little easier for the military academies.

Trump's own Defense Department rescinded a policy in 2017 that allowed the best athletes from the military's service academies to go straight to the pros upon graduation instead of having to first serve in active duty.

Then-Defense Secretary Jim Mattis, in an April 2017 memo, said that the service academies "exist to develop future officers," and that graduates would serve as "full-fledged military officers carrying out the normal work and career expectations" of someone who received an education at the taxpayers' expense.

The Pentagon on Monday was not aware of any impending changes to the Mattis policy.

Under the current framework, athletes have to serve two years of active duty before applying for reserve status to pursue a career in professional sports.

Trump paid tribute to the Army football team, which has the nation's second-longest active winning streak at nine games, behind Clemson University. Trump described the players as "star athletes and stars in every way."

Several Navy football players have gone on to have success in the NFL, most notably 1963 Heisman Trophy winner Roger Staubach, a quarterback for the Midshipmen from 1962-64. After serving a tour of duty in Vietnam, he joined the Dallas Cowboys in 1969 and guided the team to a pair of Super Bowl victories.

Another Heisman Trophy winner, Glenn Davis of Army in 1946, was a first-round draft pick of the Detroit Lions but had to serve three years in the Army before making his NFL debut with Detroit in 1950.

In addition, receiver Phil McConkey played for Navy from 1975-78, then served for five years before the New York Giants made him a 27-year-old rookie in 1984. He caught a touchdown pass in the Super Bowl for New York and remained in the NFL through 1989.

More recently, Navy quarterback Keenan Reynolds was drafted by the Baltimore Ravens in the sixth round of the 2016 draft after completing a four-year run with the Midshipmen. He played in two games with Seattle last season.

After Reynolds went pro, the Defense Department in 2017 rescinded a year-old policy that allowed military service academy athletes such as Reynolds to play professionally immediately upon graduation.