Tua taking his shot, and the Dolphins hope to reap benefits 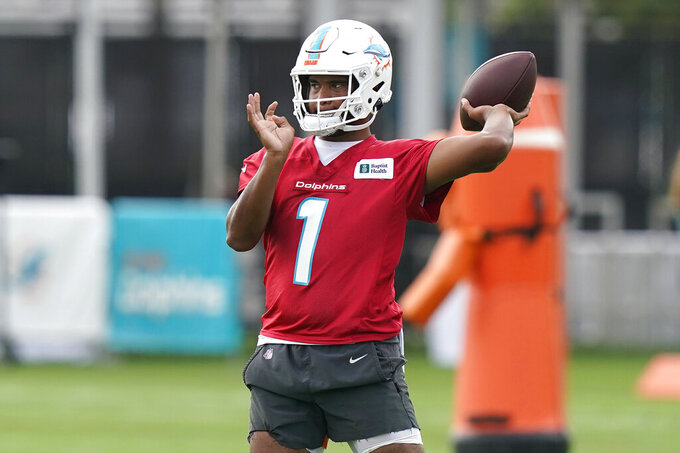 MIAMI GARDENS, Fla. (AP) — A basketball court is among the recreational offerings that Miami Dolphins players have at their disposal at team headquarters. Shooting is all that is allowed, for fear that anything else would expose players to injury.

Word is, receivers Tyreek Hill and Jaylen Waddle are among the best shooters on the roster.

Say this for Tagovailoa these days: Confidence is not a problem.

And that, the Miami Dolphins hope, is a very good sign heading into the training camp that began in earnest with the first on-field workout Wednesday. There’s no shortage of storylines — new coach Mike McDaniel’s first camp in Miami, a revamped offensive line, a slew of free-agent acquisitions led by Hill coming to the Dolphins.

But, as always, the quarterback is the center of attention, and Tagovailoa’s third year as a pro is certainly going to be accompanied by more expectation than he had in Years 1 and 2.

“It comes with the position,” Tagovailoa said. “Pressure is always there playing this position and playing in the NFL. I think for any professional athlete, everyone can attest that it’s an added pressure. We put that pressure on ourselves to compete every day, to be the best, to do things the right way and to do things the right way consistently.”

There are expectations for the Dolphins, who made huge splashes in the offseason by landing — among others — Hill, offensive linemen Terron Armstead and Connor Williams, running backs Chase Edmonds, Raheem Mostert and Sony Michel, and quarterback Teddy Bridgewater to be Tagovailoa’s backup.

McDaniel, a longtime assistant whose most recent job was offensive coordinator in San Francisco, takes over for Brian Flores, who was fired after three seasons and no playoff appearances. After the firing, Flores filed a lawsuit against Dolphins owner Stephen Ross, along with the Dolphins and the NFL, alleging racist and discriminatory hiring practices — along with a claim from Flores that Ross offered him $100,000 for each loss in the 2019 season, something the Dolphins have denied.

There’s no suggestion that tanking remains in the Dolphins’ vernacular. Miami’s offseason spending screams that the Dolphins are trying to win, win now and win big.

“There’s no such thing as just going through the motions,” McDaniel said. “When we practice, we want to practice with an intent and a purpose and a speed and a veracity that separates ourselves from the rest of the league. That is hard to do. There’s a lot of people working. There’s a lot of talent. We built a standard in OTAs. And my expectation in training camp is that this team, their standard is to practice hard.”

That’s a message that Tagovailoa understands.

Criticism of Tagovailoa’s first two years, and even this offseason, has not been hard to find. The Dolphins put up a short clip on their social media channels of Tagovailoa throwing a deep pass to Hill during a workout back in May — nobody was in pads and Tagovailoa was wearing a bucket hat instead of a helmet — and even that became the subject of great scorn because the ball was underthrown.

Tagovailoa, though, is beginning to fight back. He's sounding more confident than he has at any point in his Miami career. Hill has quickly championed his new quarterback’s talents, touting his accuracy at every opportunity. And Tagovailoa’s message to critics is simple: everybody’s entitled to an opinion, and their opinion just doesn’t matter to him.

There were some good things about the first camp practice, some bad things, and not much of it mattered. After a season marred in large part by the Dolphins’ not-exactly-a-secret interest in acquiring quarterback Deshaun Watson — Miami was 1-7 before the trade deadline, then won seven consecutive games after it passed — there’s no question that the quarterback job belongs to Tagovailoa.

It’s his team. There’s no need for him to prove it on the basketball court. The shots the Dolphins want to see him hit are the ones downfield on Sundays.

“Overall, it was a good first day of practice,” Tagovailoa said. “Obviously, there’s things that we can work on. But it’s the best when you get to come back, you get to get back out on the field, throw to the guys, see coverage again, get back into the groove of things.”