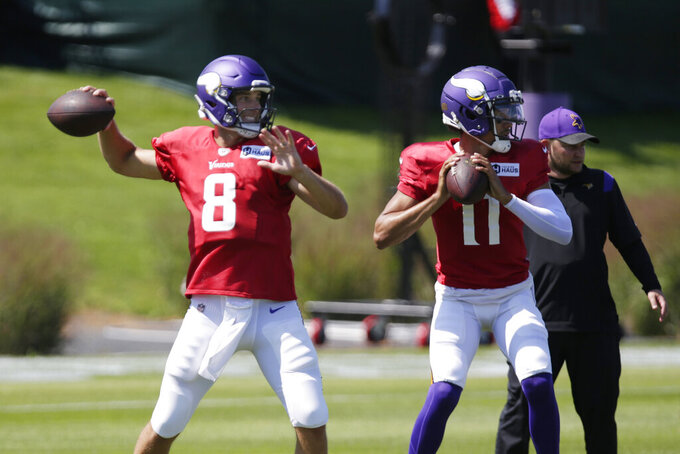 EAGAN, Minn. (AP) — Minnesota Vikings quarterback Kirk Cousins has tested positive for COVID-19 and will not play this weekend in the team's first preseason game.

Coach Kevin O'Connell confirmed the diagnosis Friday at practice, where Cousins was absent for a second straight day. He felt ill Thursday and sent home.

“I like the way he handled it, reporting the symptoms and going through our in-house process we have here,” O'Connell said. "Ultimately looking out for his teammates and making sure we’ll get him back, ready to roll as soon as possible.”

Sean Mannion and Kellen Mond will split time in the exhibition Sunday at Las Vegas, where Cousins was unlikely to play much, if at all, even if he wasn't sick. There are no other quarterbacks on the roster.

“No matter who starts, they’re both going to play a ton. Big evaluation game for us of those guys,” O'Connell said. "They’ve done a lot of really good things in camp, and now we get to see them play against a complete defensive structure, different coverages. I think it’ll be good for those guys.”

The Vikings are planning, roughly, an even split of the snaps against the Raiders.

“If a guy gets hot, starts feeling maybe he should take one more or two-minute or something like that, we’ll always adapt," O'Connell said. "But we’ll have plenty of snaps to make it right through these next three games.”

Cousins missed Minnesota's second-to-last game of the 2021 season after testing positive for COVID-19. He also missed five days in training camp last year due to what was deemed a close contact. Cousins followed NFL protocols for unvaccinated players last season.

Earlier this year, the league suspended all coronavirus protocols. The current recommendation from the Centers for Disease Control and Prevention is for people who test positive to isolate from others for at least five days. Isolation can end, the CDC says, if they are fever-free for 24 hours without medication and experiencing improvement in symptoms.

The Vikings' next practice is Tuesday, putting Cousins on track to return to the field then, assuming he's feeling fine. He has never missed a game or practice to injury in his NFL career, only illness.

No matter who's taking the snaps, the otherwise meaningless game will mark a special occasion for O'Connell in his first live experience as a head coach. His counterpart on the Raiders sideline, Josh McDaniels, was the offensive coordinator for New England in 2008 when O'Connell was drafted by the Patriots.

“I have thought about it. I’m excited about it. Regardless of the result truly mattering for where our team will finish up this year, it’s still important for me to make sure I’m going through my process, not only as a play-caller but as a head coach,” O'Connell said.