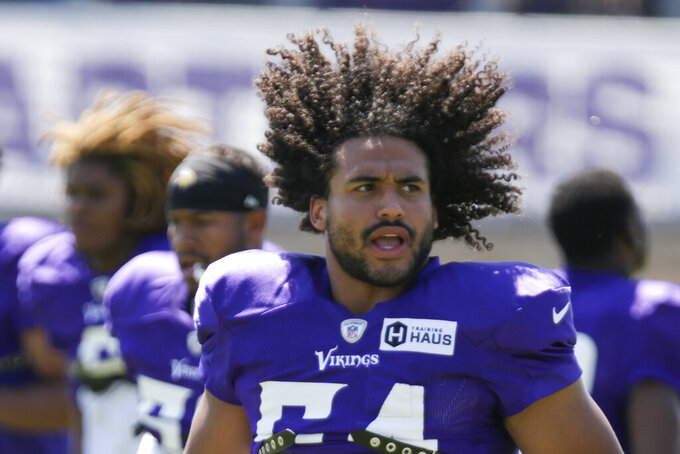 EAGAN, Minn. (AP) — For Minnesota linebacker Eric Kendricks, a decade of playing next to Anthony Barr made it easy to be on the same page with his close friend and former roommate — simply with a knowing glance.

Kendricks and Barr, first at UCLA and then with the Vikings, developed a sense of mutual understanding on the field that allowed them to rapidly adjust to what opposing offenses presented. Sometimes all it took was just “the look.”

The familiarity for Kendricks is gone, but a new bond has been forming quickly with Hicks.

“Him being in the same position I’ve been in, us to have multiple looks, multiple defenses, I feel like we just kind of have a general understanding of football,” Kendricks said. “Shoot, we just get each other. It works out nice.”

A week after being a salary-cap cut by Arizona, Hicks signed a two-year, $10 million contract in March with the Vikings. Donatell was already set to implement the 3-4 after Minnesota had used a 4-3 defense for years under coach Mike Zimmer.

Hicks, who posted at least 100 tackles each season while starting every game the last three years for the Cardinals, was paired with Kendricks inside. Barr became a free agent and recently signed a one-year contract with Dallas.

The Vikings have enjoyed instant cohesiveness on the outside, too, with Smith and Danielle Hunter forming an immediate connection. The togetherness is even more vital inside, where Kendricks and Hicks have worked to quickly create that.

“To have Jordan Hicks come in here and fit in, to have Eric feel comfortable, that’s special,” Donatell said. “With those two guys playing together, right now how they play off each other, I haven’t been around much better. I’ve been as good but nothing better than that.”

Donatell said both Kendricks and Hicks, separately, approached him during the spring and mentioned how much they liked playing alongside the other.

“You can go out and recruit players, but it’s important to bond them and they bonded themselves,” Donatell said. “What a special plus for us, for the coaches. We’re happy with those two guys. It’s really a neat relationship. It’s almost like Za’Darius and Danielle: They’re inseparable, and they didn’t know each other five months ago.”

Kendricks and Hicks both pointed to their career similarities as reasons for their fast connection.

Both were drafted in 2015 — Kendricks in the second round out of UCLA and Hicks to Philadelphia in the third round out of Texas. Hicks played with Kendricks’ brother, Mychal, with the Eagles. They both have led their teams in tackles. Kendricks has been a leader on and off the field during his time in Minnesota. Hicks was a captain the past two years for Arizona.

Only two players in the league registered at least 100 tackles and four sacks last season: Kendricks and Hicks.

So much so that the nonverbal communication – like that enjoyed by Kendricks and Barr before – is also coming together. Kendricks and Hicks have even discussed “the look.”

“We’re getting there,” Hicks said. “We actually talked about ‘the look’ the other day. Nonverbal communication where we just know what each other is thinking and reacting off of it. That’s what we’re practicing. That’s the beauty in training camp and going against our offense that has so many different wrinkles to it. We’ve been able to have a lot of things that we’ve had to talk through and work through, and it’s making us better.”