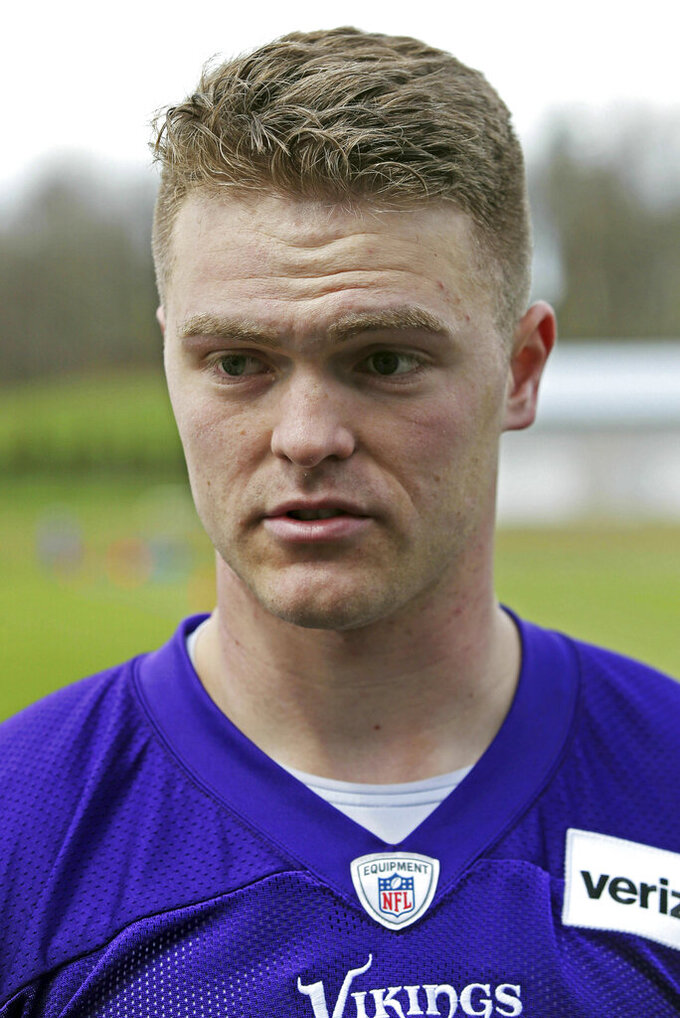 Minnesota Vikings rookie Austin Cutting talks with reporters after rookie minicamp workouts began at the NFL football team's complex Friday, May 3, 2019, in Eagan, Minn. Cutting became the first Air Force player drafted in 20 years, when the Vikings took the long snapper in the seventh round. Pursuing a pro football career isn't so simple, though, with required military service to be sorted out first for Cutting. (AP Photo/Jim Mone)

EAGAN, Minn. (AP) — Long snappers are the afterthoughts of the NFL draft. Players from the service academies, on track to join the military and not pro sports, are largely ignored.

Still, here was Austin Cutting, a seventh-round pick out of the Air Force Academy, sharpening his specialist skills in rookie minicamp on Friday with the Minnesota Vikings and taking the first step toward what would be an unlikely, complicated and potentially inspiring career in the league.

"It was just good to be out here for the first time," Cutting said, "so I loved it."

Continuing further into the NFL calendar will depend on a plan for fulfillment of the minimum of two years of active duty for all cadets upon graduation, which is on May 30. Two years ago, the Defense Department rescinded a policy that previously allowed service academy athletes to delay their active duty to pursue a pro sports career. That undoubtedly steered teams away from drafting Jalen Robinette, the all-time leading receiver for Air Force.

Vikings general manager Rick Spielman has been speaking with academy officials about options Cutting might have to meet his requirement while simultaneously trying to make the team.

"It's not, 'OK, the Air Force was done, and now it's time for the NFL,'" Cutting said, adding: "It's decisions that are made above my pay grade, and they'll help me along the way."

Cutting, who picked up his long snapping trade at Central High School in Keller, Texas, in the Dallas area, has been majoring in management. He's an acquisitions officer , the personnel designated to serve as the government's business managers and technical experts in buying everything from computers to helicopters for forces around the world.

"I've heard everybody who does it loves it," Cutting said.

The chosen few who make it to the NFL usually do, too. Even simply taking the call from the Vikings last weekend, at home with family and friends, was one of those moments Cutting will always remember no matter where his career winds up taking him.

"When it actually happens, you can't really describe it," Cutting said. "It's a great feeling."

The Vikings have signed nine of their draft picks, with first round center Garrett Bradbury, sixth round cornerback Kris Boyd and Cutting the only ones still without a finalized contract. Unsigned players are typically given a special injury waiver to participate in offseason workouts until their deals are done.

In addition to the 12 draft picks and 10 rookie free agents the Vikings acquired last weekend, seven other players on the 90-man roster, whether a practice squad member last season or a recent signing from the defunct Alliance of American Football, were eligible to participate in the practices at team headquarters.

Then there's a group of 37 players who were invited on a tryout basis, seeking to become the next Marcus Sherels or Adam Thielen.

Sherels became the franchise's all-time leading punt returner before signing with the New Orleans Saints this year. Thielen recently signed a $64 million contract after a second Pro Bowl selection. Both Sherels (2010) and Thielen (2013) needed a successful rookie minicamp to even make the summer roster.

"We're looking for guys that, number one, are good people, and number two, they have to have athletic ability," coach Mike Zimmer said. "Come out and do what they're being coached to do."

Among the tryout players this weekend are former UAB safety Mar'Sean Diggs, the brother of Vikings wide receiver Stefon Diggs.

"That's all I ever wanted, was to play in the NFL. Having the opportunity now means the world to me, so hopefully, and God willing, I make the team," said the younger Diggs, who has been training with his older sibling for the last three months.

He's been listening, too, whatever advice big bro has.

"Just to keep my head down and work and stay quiet," Diggs said. "Take heed to everything that's going on. Take coaching. Keep my playbook with me at all times, and just do what you do."