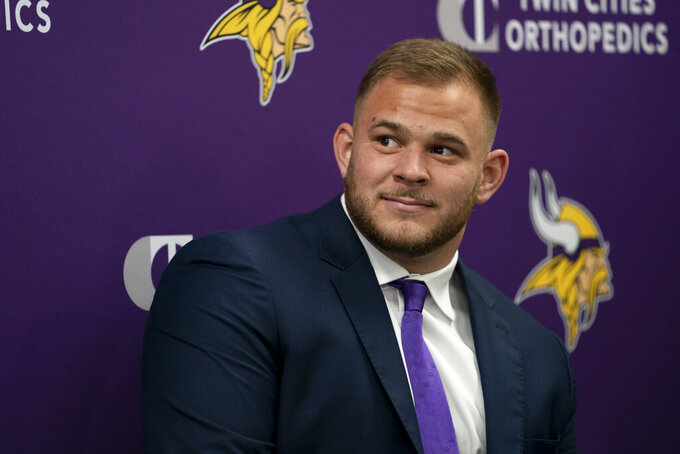 The son of former NFL tight end Irv Smith had plenty of footballs, helmets and trophies in the house to steer him toward the sport. Some simple advice from his father, who played five of his seven seasons in the league with New Orleans after being drafted in the first round in 1993, helped him settle at the same position.

The Minnesota Vikings selected the Alabama standout with the 50th overall pick in the second round on Friday night, adding another potential field-stretching pass-catcher for quarterback Kirk Cousins.

The Vikings then fueled up for the final four rounds on Saturday by making four separate trades with their third-rounder, finally picking Boise State running back Alexander Mattison with the 102nd overall selection. The deals with Detroit, Seattle, the New York Jets and Baltimore netted them an additional four selections for the weekend and gave them nine picks for the third day.

The Vikings selected North Carolina State center Garrett Bradbury in the first round on Thursday, shoring up their greatest need: the interior of the offensive line. They targeted Mattison as a big-bodied replacement for Latavius Murray and complement to Dalvin Cook, adding a player who had 40 carries for 200 yards in the Mountain West conference championship game against Fresno State.

After finishing 20th in yards and 19th in points last season, the Vikings needed some help for the offense, a fact even their defensive-minded coach Mike Zimmer could readily acknowledge, even if he was irritated by general manager Rick Spielman's insistence on trading down four times.

"He was ready to unplug the phones again like he is every year," Spielman said.

Smith became the fourth Alabama tight end drafted in the last eight years, with O.J. Howard the most recent by Tampa Bay in the first round in 2017. With the Crimson Tide, Smith played sparingly as a freshman in 2016 while Howard was still a primary cog in the offense.

For the 2017 national champions, Smith became more involved with 14 catches for 128 yards and three touchdowns. Then last year as a junior, he flourished with 44 receptions for 710 yards and seven scores. Smith ran the 40-yard dash in 4.63 seconds at the NFL scouting combine, the fourth-fastest among tight ends, and he was the third player off the board at his position after Iowa teammates T.J. Hockenson (eighth overall to Detroit) and Noah Fant (20th overall to Denver) went in the first round.

"We can line him up wide. We can line him up in tight. We can use him in the backfield. He has a lot of versatility," Vikings director of college scouting Jamaal Stephenson said. "We want to be more explosive on offense."

And as a run blocker?

"He's OK. He's a work in progress, more from that standpoint, but he's certainly tough enough and willing, which are the two things you look for to project improvement," Stephenson said.

The Vikings have Kyle Rudolph and David Morgan for that, for now. The ninth-year veteran Rudolph has not missed a game in five seasons, is a bulwark in the community, has two Pro Bowl selections on his resume and is coming off a strong 2018, but he's in the final year of his contract with a $7.625 million salary cap hit. Smith's presence could make Rudolph expendable, should the Vikings seek more space under the cap.

"All the best tight ends in the NFL and all the greats, they're able to do both, run block and make plays in the passing game, so it opens a lot for you and it helps a team in all phases of the game," Smith said.

Make no mistake, though. He's here to create a mismatch by lining up in the slot and giving defenses concerned about wide receivers Adam Thielen and Stefon Diggs pause about who to cover him with.

"I believe no linebacker or safety one-on-one can stay with me, and I'm going to keep proving to people that's how I feel," Smith said.