Brady vs Rodgers, possibly Mahomes vs. Allen in title games 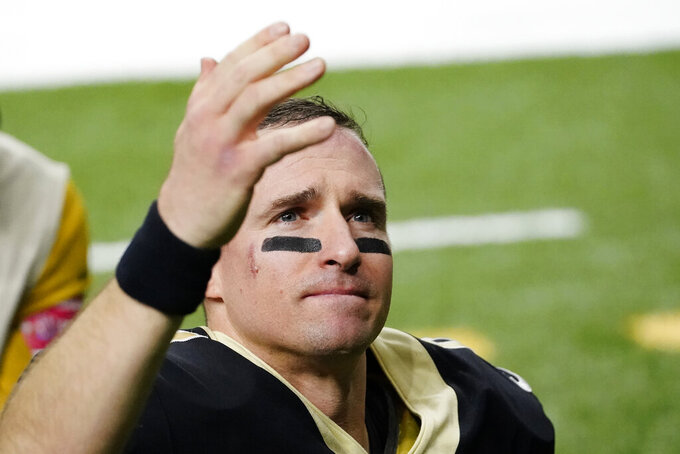 Tom Brady will take on Aaron Rodgers in a matchup of quarterback legends in the NFC title game.

The AFC championship could feature two of the top young QBs if Patrick Mahomes is healthy enough to start for Kansas City against Buffalo's Josh Allen.

An enticing final four in the NFL was set up Sunday when Brady's Tampa Bay Buccaneers beat the New Orleans Saints 30-20 after the Chiefs held on for a 22-17 win over Cleveland after Mahomes left with a concussion.

Backup Chad Henne converted a fourth-and-1 pass to Tyreek Hill to seal the win for Kansas City after Mahomes had been knocked out of the game.

“We’re one team. We’re one heartbeat. We play for one another and that’s really always the thought,” defensive back Tyrann Mathieu said. “Any time any of our teammates go down we always feel the need to kind of step it up a notch and take care of what we need to take care of."

Coach Andy Reid’s gutsy call helped make sure the Chiefs would become the first team to host the AFC championship game for the third straight year. No AFC team has ever done that and the only one to do it in the NFC was Reid’s Philadelphia Eagles in the 2002-04 seasons.

Kansas City (15-2) will host the Buffalo Bills (15-3) next Sunday with a return trip to the Super Bowl on the line for the Chiefs. Kansas City won the regular-season matchup 26-17 in Buffalo in Week 6.

“Great team. Big-time quarterback. Playmakers all over the place," Mathieu said of the Bills. "A really, really good defense, so we’re going to have our hands full next week.”

Mahomes’ status won’t be known until much later in the week. He threw a TD pass and ran for another score in the first half before getting hurt on a quarterback option midway through the third quarter.

Brady threw two TD passes and relied on his defense to make it to his 14th conference title game and first since joining Tampa Bay (13-5) in the offseason.

Brady will be the fourth quarterback to start in conference title games in both the NFC and AFC with his boyhood hero Joe Montana the most recent to do it.

The Bucs will visit Green Bay on Sunday to take on Rodgers and the Packers (14-3). Tampa Bay won the regular-season matchup 38-10 in Week 6.

“It’s great for our team," Brady said. "We worked hard to get to this point. Two road playoff wins is pretty sweet.

"We’ve got to go beat a great football team we know pretty well. Aaron’s playing incredible, and we’re going to have to play great to beat them.”

Brady threw short TD passes to Mike Evans and Leonard Fournette, and ran for another score following three of the four turnovers by the Saints (13-5) as the Bucs avenged two regular-season losses to New Orleans.

Drew Brees threw three interceptions in what could be his final game before a possible retirement. This is the third straight season the Saints have been eliminated with a home playoff loss.

Kansas City raced out to a 19-3 halftime lead behind Mahomes and held on for the win thanks to Henne and the defense.

Mathieu intercepted Baker Mayfield in the third quarter and the Chiefs made a third-down stop late in the fourth quarter on Cleveland’s last drive.

Henne and the Chiefs then ran out the clock. Henne converted a third-down pass to Darrel Williams and then scrambled 13 yards on third-and-14 to set up the biggest play of the game with a little over a minute to play.

Instead of playing it safe and punting, Reid called a pass play and Henne completed a 5-yarder to Hill to ice the game.

The other key play came late in the first half when Cleveland receiver Rashard Higgins tried to stretch the ball over the goal line for a touchdown. Kansas City's Daniel Sorensen delivered a hit, popping the ball loose and into the end zone for a touchback.

Aaron Rodgers threw two touchdown passes and also ran for a score as the top-seeded Green Bay Packers beat the Los Angeles Rams 32-18. The win sends Rodgers to his fifth NFC title game as starting quarterback and the first at home since taking over from Brett Favre in 2008.

Rodgers threw a 1-yard touchdown pass to Davante Adams and a game-clinching 58-yarder to Allen Lazard with 6:52 left for Green Bay (14-3). Rodgers also had a 1-yard touchdown run, the first by a Packers quarterback in a playoff game at Lambeau Field since Bart Starr’s winning sneak in the Ice Bowl against Dallas on Dec. 31, 1967.

Taron Johnson returned Lamar Jackson’s interception 101 yards for a touchdown to send the Buffalo Bills to their appearance in the AFC title game since the 1993 season with a 17-3 win over the Baltimore Ravens.

The interception return matched the longest in NFL playoff history and punctuated a stellar defensive outing in which Buffalo (15-3) limited the NFL’s top running offense to 150 yards on 32 carries.