With Colquitt, Vikings hope to have found kicking continuity 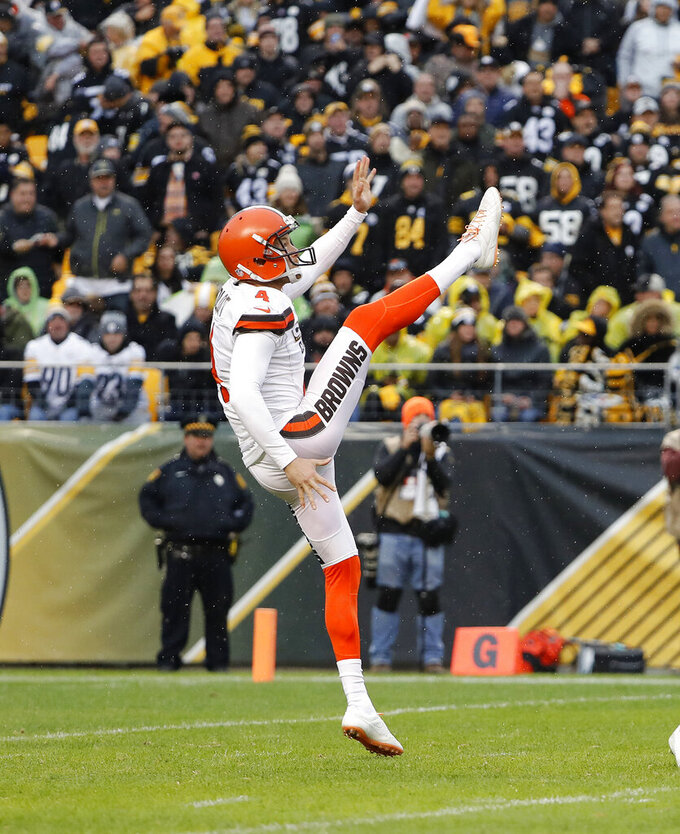 EAGAN, Minn. (AP) — For the fourth consecutive season, the Minnesota Vikings will take a kicker and punter pair into their opener that's different than the year before.

This time, their specialists have a combined 17 seasons and counting of NFL experience. Perhaps, for the viability of their quest to return to the playoffs and win that elusive Super Bowl, not to mention for the sake of coach Mike Zimmer's sanity, the Vikings have finally stabilized these confounding positions that can make or break a game at the most critical moments.

"I hope so," Zimmer said on Monday, with the first game against Atlanta just six days away. "It's like everything else: You have to go out and do it. But they both had a good day out there today, so we'll see."

Britton Colquitt is the newbie this time, and he's no stranger to professional football. The 10th-year punter signed with the Vikings on Sunday after being cut by Cleveland in favor of rookie Jamie Gillan.

Colquitt, the younger brother of Kansas City punter Dustin Colquitt, was picked as an alternate for the Pro Bowl last season after tying a franchise record with 32 punts landed inside the 20-yard line. Colquitt spent three years with Cleveland, after his first six seasons in Denver included a Super Bowl ring. He has a career average of 45.5 yards per punt.

Colquitt will also serve as the holder, an often overlooked role that was part of the reason the Vikings let punter Matt Wile go. The Vikings brought in second-year specialist Kaare Vedvik three weeks ago to challenge both Wile and kicker Dan Bailey, even sending Baltimore a fifth-round draft pick to get him. Vedvik missed three of four field goals in exhibition game action and was waived over the weekend, eventually claimed by the New York Jets.

Bailey, who joined the Vikings three games into the 2018 season after rookie Daniel Carlson was dumped, will now have another new holder and a rookie long snapper, Austin Cutting.

"Dan went 6 for 6, so it was a good day," Colquitt said after his first practice with the Vikings. "I feel like it wasn't too complicated. We got some good stuff done, and we got some good chemistry."

From Blair Walsh to Kai Forbath to Carlson to Bailey as the kickers, and from Jeff Locke to Ryan Quigley to Wile to Colquitt as the punters, the Vikings have churned through more than their share of specialists since 2016. After Walsh's infamous wide left on the 27-yard field-goal try in the playoffs after the 2015 season, the Vikings have sure been snake-bitten on special teams.

"This is my 10th year, so I feel confident in that. I'm not worried about that," Colquitt said, adding: "I don't think there's a curse here. I just think there hasn't been a good mesh. And I think there's been talent, because I think Wile and Quigley have been really good punters. But it's a whole thing. It's a room, you know what I mean? It takes the long snapper, the holder, the punter and the kicker, and the coaches. It's a big thing. We're kind of like golfers, a little more sensitive sometimes than the big, tough, meaty football players. It's a whole chemistry deal."