Dolphins look improved from early 2019 but are still 0-2 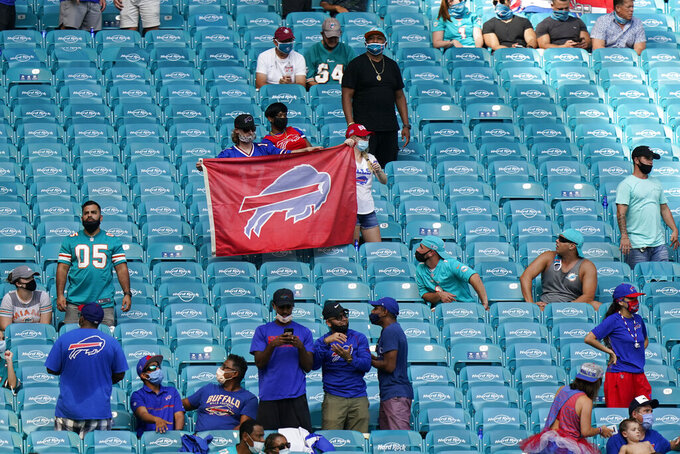 Buffalo Bills fans celebrate their team during the second half of an NFL football game against the Miami Dolphins, Sunday, Sept. 20, 2020 in Miami Gardens, Fla. The Bills defeated the Dolphins 31-28. (AP Photo/Wilfredo Lee) 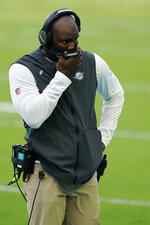 MIAMI (AP) — So far the rebuilding Miami Dolphins haven't been historically bad, which means they're better.

A year ago the Dolphins endured one of the NFL's worst starts ever, and were outscored 102-10 in their first two games under rookie coach Brian Flores.

Now they're 0-2 again, but they've been outscored only 52-39 and led Sunday against Buffalo with six minutes left.

“Being 0-2 is tough," Flores said Monday. "There is a lot to improve on. It was a more competitive game than the week before; we had a lead in the fourth quarter. But we’ve got to finish. We need to learn how to do that.”

Mike Gesicki looked like a possible bust as a rookie in 2018, but he's building on his strong finish last year. Against Buffalo the 6-foot-6 Gesicki had eight catches for 130 yards, both career highs, and that included an improbable one-handed grab.

"His confidence continues to rise, and I think we’ll just continue to see him get better,” quarterback Ryan Fitzpatrick said.

The Dolphins invested heavily to upgrade the defense after allowing a franchise record 494 points last year. This year they're last in the NFL in yards allowed per play at 7.2.

Well-paid veteran newcomers Kyle Van Noy, Emmanuel Ogbah and Shaq Lawson have failed to improve the pass rush, which produced one sack against the Bills. That left Xavien Howard, Nik Needham and first-round pick Noah Igbinoghene struggling to keep up with Buffalo's receivers.

The Dolphins gave up 413 yards passing, their worst effort in eight years, and allowed the Bills to average 4.8 yards on the ground.

Fitzpatrick rebounded from a three-interception game in the opener to throw for 328 yards and two scores with no turnovers. He led a rally that gave Miami a brief lead in the fourth period.

WR Preston Williams has yet to show the playmaking talent that helped him win a starting job last year as an undrafted rookie, before he missed the second half of the season with a torn left ACL.

In the opener, he slipped on a pass pattern and the throw was intercepted. Against Buffalo, he dropped a fourth-and-1 pass in the end zone.

“We’re going to rely on him to make a lot of big plays this year," Fitzpatrick said. “That was just one opportunity, one moment. The ball is going to come back to him.”

Cornerback Byron Jones hurt his groin on the first series and missed the rest of the game.

“Obviously it’s a quick turnaround,” Flores said. “He’d have to heal pretty quickly. We’re not ruling him out or anything just yet.”

11,075 — That's how many tickets were sold Sunday, well short of the 13,000 maximum set by the Dolphins. Almost half of the spectators wore Bills colors.

Even so, Fitzpatrick said it was good to have fans in the stands — something that's not happening in many NFL cities because of the coronavirus.

“It was a way better environment,” Fitzpatrick said. "Even though the place obviously wasn’t at capacity, it felt a lot more like a football game. It was not eerily quiet the whole game. That was I think huge for us, and something that as players we all really enjoyed.”

The Dolphins have a short week and must travel to face surprising Jacksonville and Gardner Minshew, who is tied for second in the NFL with six touchdown passes.

By Dennis Waszak Jr. 47 minutes ago
By Josh Dubow 5 hrs ago
By Jim Vertuno 8 hrs ago
10 hrs ago
By Barry Wilner 12 hrs ago