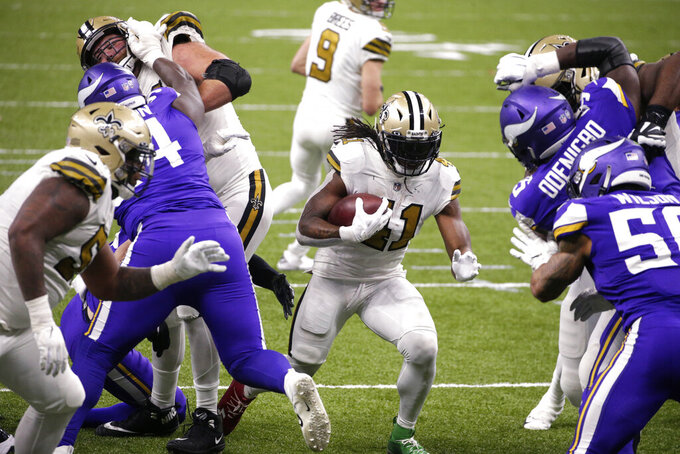 New Orleans Saints running back Alvin Kamara (41) carries for his fifth touchdown of the game, in the second half of an NFL football game against the Minnesota Vikings54 in New Orleans, Friday, Dec. 25, 2020. (AP Photo/Butch Dill)

MINNEAPOLIS (AP) — The Minnesota Vikings' grind of a season will end this week with a failure to notch consecutive appearances in the playoffs that has continued for 11 years and counting.

There are many lessons worth learning for the front office, coach Mike Zimmer and his staff and the players on a dismal defense that had a big hand in the 52-33 defeat at New Orleans on Friday. The Vikings play at Detroit in the finale between two eliminated teams.

“The biggest thing is when you get your nose rubbed in it, you’ve got to come back out and fight,” Zimmer said on Monday. “It’s going to show the personality of these players that we have and what they have to do and understand that.”

Zimmer reflected on his time with Dallas, where the core of a three-time Super Bowl champion team endured a 1-15 season in 1989 — three years prior to its run of three titles in four seasons.

“All the old players talked about them being 1-15 and all the trials and tribulations they had to go through that year in order to get to that point and how they had to come back and fight and be ready to go the following year and the following year,” Zimmer said. “A lot of that is that you learn how to figure out a way how to make sure that doesn’t happen to you ever again.”

Not to ignore of the parts of the offense that have been in prime form, but at this point in the pandemic-altered season it's worth a tip of the cap to the team's adherence to virus safety protocols. Thielen was the only prominent player to miss a game because of COVID-19, and the Vikings won in his absence. They didn't have any team-wide outbreaks. None of their games had to be rescheduled.

“Our guys have done a great job with the protocols. Eric Sugarman has done a great job of really policing it,” Zimmer said, referring to the head athletic trainer. “Knock on wood, we can all make it.”

The run defense has been nonexistent the last two games, with the success by Chicago's David Montgomery on Dec. 20 a harbinger for Alvin Kamara's record-tying six-touchdown performance for the Saints on Christmas night. The Vikings have allowed the fifth-most rushing yards in the league this season, with defensive tackles Shamar Stephen and Jaleel Johnson too often overwhelmed at the line. The tackling at the second and third levels hit a new low at New Orleans.

Harrison Hand, who as a fifth-round draft pick has been tasked with far less responsibility than fellow rookie cornerbacks Jeff Gladney and Cameron Dantzler, recorded his first career interception when he picked off Drew Brees at the Minnesota 8-yard line midway through the second quarter when the Vikings were only trailing 17-14. Hand also excelled on punt coverage.

The depth chart for next season beyond Gladney and Dantzler will be wide open, creating further opportunities for Hand to increase his role.

Gladney missed three tackles, and Brees completed every pass that went to his coverage area. He was bound to have struggles in his first year, particularly when asked to bounce back and forth between the slot and the outside, but there have been more downs than ups lately for the first-round pick out of TCU.

All seven players on the inactive list on Friday were injured, with tight end Kyle Rudolph (foot) missing his third straight game and linebacker Eric Kendricks (calf) out for the fourth game in a row. The likelihood of either of them, or any other starter fighting an injury, playing at Detroit is low.

29.3 — points allowed per game by the Vikings, the fifth-worst average in the league. Their ranks over the previous six years of Zimmer's tenure: sixth, ninth, first, sixth, fifth and 11th.

The meaningless matchup with the Lions will give the Vikings an extra look at some of their inexperienced players in an earlier-than-expected evaluation of the 2021 roster.

One example: Blake Lynch. The undrafted rookie from Baylor, who was promoted from the practice squad three weeks ago, had a team-high 10 tackles against the Saints after becoming the seventh different player to start at linebacker for the Vikings this season.