Garoppolo not concerned with QB controversy, will help Lance 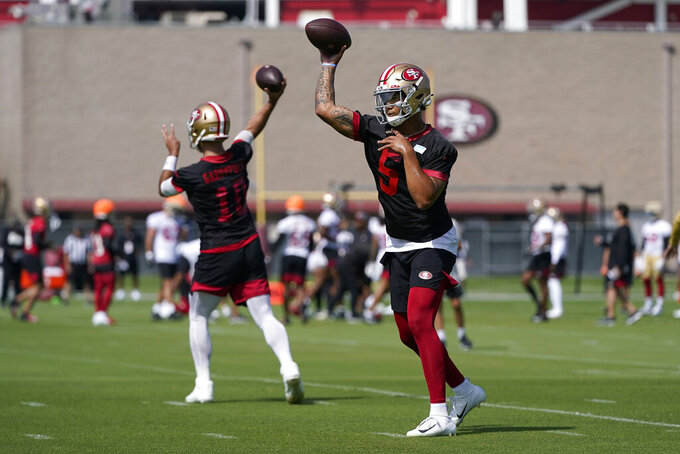 SANTA CLARA, Calif. (AP) — Jimmy Garoppolo is still the starting quarterback for the San Francisco 49ers, but the Trey Lance questions were inevitable.

Garoppolo practiced alongside the North Dakota State rookie Wednesday morning before addressing the team’s QB situation for the first time at training camp.

“I don’t know what you’re talking about with ‘awkwardness,‘” he joked. “We’ve had a good relationship. We really have. It’s sort of one of those things, it is what it is. This business is weird. But at the end of the day, we’re in that locker room, we’re around each other so much that it’s just business.”

San Francisco traded up to select Lance with the No. 3 pick of April’s draft, immediately raising significant questions about Garoppolo’s future with the team. But the 29-year-old has remained intensely focused throughout the offseason, eager to put the disappointment of last season behind him.

“He came back to OTAs looking like a different guy, just really locked in and focused on the things he needed to work on,” WR Deebo Samuel said.

Added FB Kyle Juszczyk: “I think that says a lot about just the character of him, being in the position that he is and recognizing all that we gave up to move up and get Trey at the No. 3 spot. That could shake a lot of people. But if it has, we haven’t noticed it. Jimmy is Jimmy and he has the same confidence that he’s had from day one, and even more so.”

Lance also performed well, much to the delight of Garoppolo.

“I’m always pulling for Trey, pulling for all the QBs,” he said. “Anything he needs, I’m willing to help him. I think Nate (Sudfeld) and Josh (Rosen) are the same way. We’ve got a good room right now in the QBs and it’s fun to be around.”

Added Shanahan: “Jimmy’s made for that. His personality and stuff, he’s one of the guys in there, whether it’s with Trey or anyone else. So it’s been a good dynamic so far.”

Still, the 49ers’ quarterbacks situation will undoubtedly remain a major story throughout training camp and into the season. At least with the fans and media.

Garoppolo is just happy to be healthy, admitting the ankle injury that kept him out for much of last season was probably more serious than he let on.

“Yeah, it was pretty bad,” he said. “Surgery was debated but whenever I can avoid that, I’m going to do that. … The ankle’s been feeling great. Honestly, it really has. So I’m happy about that.”

NOTES: As expected, DE Nick Bosa, WR Jalen Hurd and DE Dee Ford were limited participants in Wednesday’s practice, doing just individual drills as they return from injury. DT Javon Kinlaw was also limited to individual drills after his knee swelled recently while traveling following a January procedure. Shanahan said he will have a lighter load during training camp. … WR Jauan Jennings and S Jaquiski Tartt were placed on the Reserve/COVID-19 list, joining CB Emmanuel Moseley, who went on the list Tuesday.