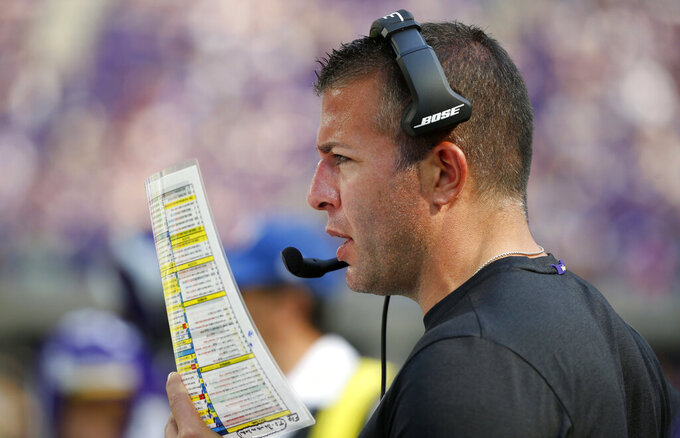 FILE - In this Sept. 23, 2018, file photo, Minnesota Vikings offensive coordinator John DeFilippo looks at his play sheet during the second half of an NFL football game against the Buffalo Bills, in Minneapolis. The Jacksonville Jaguars have hired former Minnesota offensive coordinator John DeFilippo to the same position. The Jaguars also filled five other staff positions. DeFilippo replaces Nathaniel Hackett, who was fired in late November and landed in Green Bay. (AP Photo/Bruce Kluckhohn, File)

JACKSONVILLE, Fla. (AP) — John DeFilippo got his first NFL job working for Tom Coughlin, serving as a quality control coach for the New York Giants in 2005-06.

Fourteen years later, and with a resume that includes tutoring Mark Sanchez and Carson Wentz as rookies and winning a Super Bowl with backup Nick Foles, DeFilippo has returned to Coughlin's regime.

The Jaguars hired the former Minnesota offensive coordinator to the same position Wednesday, hoping he can help revitalize one of the league's least-productive offenses.

Coach Doug Marrone announced the addition of DeFilippo along with five other assistant coaches. DeFilippo replaces Nathaniel Hackett, who was fired in late November and landed in Green Bay.

The Vikings parted way with the 40-year-old DeFilippo in mid-December, reportedly for failing to commit to the run ground game. DeFilippo spent less than a year in Minnesota. The Vikings hired him after two seasons in Philadelphia, where he was praised for his work as quarterbacks coach with Foles and Wentz. DeFilippo had one previous NFL stint as an offensive coordinator, in Cleveland in 2015.

DeFilippo will be tasked with improving an offense that ranked 27th in yards and 31st in points in 2018. He also could play a role in developing the team's next quarterback, something he did with Sanchez, Wentz, Foles, Oakland's Derek Carr and even Minnesota's Kirk Cousins.

The Jaguars have failed repeatedly to find a long-term solution at the all-important position, coming up short with Byron Leftwich, David Garrard, Blaine Gabbert and Blake Bortles. The Jags are expected to move on from Bortles before March, draft a quarterback and sign a veteran to potentially start until the rookie is ready.

Marrone said DeFilippo's relationship with Foles had nothing to do with the hiring. Still, adding DeFilippo surely will raise questions about Foles ending up in Jacksonville.

The Eagles must decide by mid-February if they want to exercise a $20 million option to keep Foles in 2019. Foles could decline it and pay back $2 million to become a free agent. Philadelphia also could place a franchise tag on Foles and try to trade the former Super Bowl MVP.

Of all the new hires, Robiskie is the most interesting.

The 64-year-old Robiskie was born and raised in New Orleans and attended LSU, giving him a background similar to starting running back Leonard Fournette.

The Jaguars have struggled to get through to Fournette, the fourth overall pick in the 2017 draft who has been suspended, fined and benched. He has been repeatedly late for meetings and was admittedly out of shape last season.

Following his one-week suspension in November, the Jaguars voided the remaining guarantees in Fournette's four-year rookie contract worth $27.1 million. It could cost him up to $7.1 million.

Marrone, general manager Dave Caldwell and top executive Coughlin would prefer to see Fournette become a better pro, and Robiskie could be instrumental in helping him get on track.

"I don't know if Leonard even knew (Robiskie) played in New Orleans," Marrone said. "That's something that'll be with the two of them."

Marrone said he and Fournette had a long meeting last week that hopefully will get them on the same page.

"We just talked (about) where we're going, where we want to go, what we want to do and set out a plan," Marrone said. "I feel good about it."