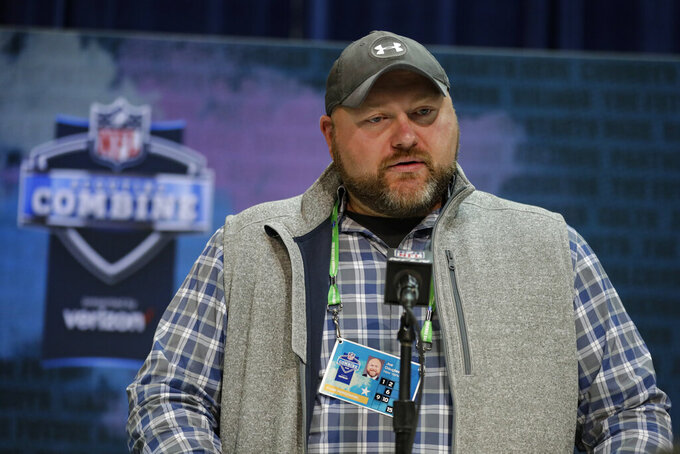 FILE - In this Feb. 25, 2020, file photo, New York Jets general manager Joe Douglas speaks during a news conference at the NFL football scouting combine in Indianapolis. Douglas fully envisioned Jamal Adams being a big piece of what he wants to build for the Jets. The general manager raved about the All-Pro safety's abilities as a playmaker and leader when he took over the franchise just over a year ago. Well, things changed. In a major way. Douglas dealt Adams and a 2022 fourth-round draft pick to Seattle on Saturday, July 25, 2020, for first-rounders in 2021 and ‘22, a third-rounder in 2021 and safety Bradley McDougald. (AP Photo/Michael Conroy, File)

NEW YORK (AP) — Joe Douglas fully envisioned Jamal Adams being a big piece of what he wants to build for the New York Jets.

The general manager raved about the All-Pro safety's abilities as a playmaker and leader when he took over the franchise just over a year ago. Douglas also insisted he'd love Adams to remain “a Jet for life.”

Douglas dealt Adams and a 2022 fourth-round draft pick to Seattle on Saturday for first-rounders in 2021 and '22, a third-rounder in 2021 and safety Bradley McDougald. It was a stunning end to Adams’ short but productive Jets tenure.

“We’re excited about the opportunity that this gives us,” Douglas said during a conference call Monday. “As I’ve repeatedly said, my responsibility is to always take the call and assess value to the Jets. And ultimately, this was a deal that made sense for us to make.”

The trade capped a contentious several months between the team and the 24-year-old Adams, who wanted a contract extension and was highly critical of ownership, coach Adam Gase and Douglas in the days leading up to the deal. In an interview with the Daily News published last Friday, Adams said he was disappointed the Jets never made him an offer and felt misled by Douglas and the organization.

“I just want to make it clear that I never promised an offer to Jamal or his agent," Douglas said while speaking to reporters for the first time since the trade. "Nor was I ever dishonest or ambiguous in my communications with their camp.”

The Jets had control over Adams' contract through 2021 and could have also potentially placed the franchise tag on him in 2022, so they were in no rush to extend the player taken No. 6 overall in the 2017 draft. Adams made the Pro Bowl the past two seasons and was an All-Pro selection last year, clearly establishing himself as one of the top defensive players in the league.

Adams had outplayed his rookie deal, and wanted to get paid. The Jets valued his abilities, but wanted to wait.

Douglas referred to the financial uncertainty caused by the coronavirus pandemic. He also pointed out that only three defensive players have received extensions after their third season under the current collective bargaining agreement: J.J. Watt, Luke Kuechly and Myles Garrett.

“Not knowing what the full economic picture was going to look like," Douglas said, "we just weren’t in position to do anything immediately when it came to a contract extension.”

So, when Seattle general manager John Schneider called Douglas a few weeks ago to begin trade talks, the Jets GM listened and other teams expressed interest in Adams. But he knew what he needed to do once the Seahawks became “aggressive” with their offers.

“It certainly wasn’t the plan when I first arrived here,” said Douglas, who was hired in June 2019. “It’s just the circumstances of how things played out. It really was our plan to keep to keep Jamal here. But when our conversations started with John and Seattle several weeks ago, the focus became clear that this is a great opportunity for us and the franchise moved forward.”

Douglas insisted Adams' critical comments last week played no role in moving the process forward. They merely became parting shots from Adams, who told the Daily News he wasn't sure Gase is “the right leader for this organization to reach the Promised Land.”

Douglas, however, has a different opinion of Gase and — without being solicited — praised the Jets coach for leading the team to a 6-2 second half.

“I especially believe in Coach Gase,” Douglas said. “I feel he’s the right coach to lead this team. Having watched him work last year, having seen him and his staff overcome a 1-7 start and finish the way they did, I feel really good about where we are with him and his leadership.”

Douglas also dismissed the notion that the Jets are dismissing this season and simply focusing on the future by trading their best all-around player just days before training camp was set to open.

The truth is, the defense might not be as strong this season without Adams anchoring the secondary. But by getting the haul of draft picks he did, Douglas has potentially set up the Jets for future — and sustained — success with premium selections in the next few years.