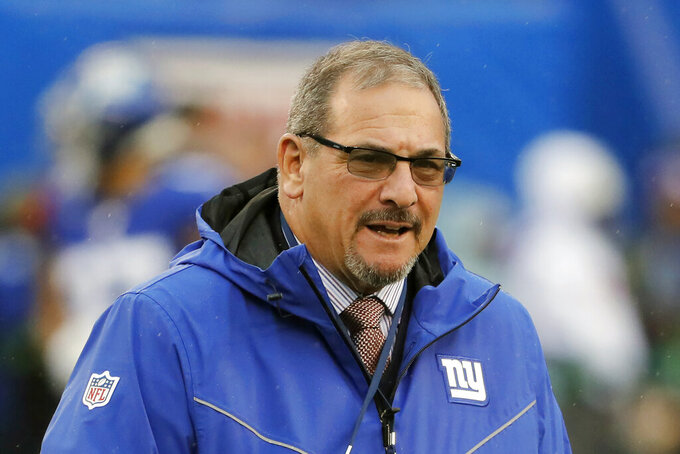 FILE - New York Giants general manager Dave Gettleman watches warm ups before an NFL football game against the Philadelphia Eagles in East Rutherford, N.J., in this Sunday, Dec. 29, 2019, file photo. While sick of the losing seasons, co-owner John Mara felt the New York Giants established a foundation and culture under rookie coach Joe Judge, giving him optimism the playoffs may not be far away. Mara also disclosed Wednesday, Jan. 6, 2021, 69-year-old Dave Gettleman would be back for a fourth season. (AP Photo/Seth Wenig, File)

EAST RUTHERFORD, N.J. (AP) — While sick of the losing seasons, co-owner John Mara felt the New York Giants established a foundation and culture under rookie coach Joe Judge, giving him optimism the playoffs may not be far away.

Mara added general manager Dave Gettleman will be back despite seeing the team win 15 games in his first three years and failing to make the postseason.

“I think what I wanted to see this year was some progress and some reason for some optimism going forward,” Mara said in a 22-minute virtual interview Wednesday. “I did see that. And that’s why I’m optimistic about what we can do in the future.”

The Giants went 6-10 under the recently turned 39-year-old Judge. They had a chance to win the NFC East until Washington (7-9) beat Philadelphia in game where Eagles coach Doug Pederson pulled his starting quarterback with the game on the line.

Mara said he did not reach out to the Eagles for an explanation, noting the only reason the Giants didn't make the postseason for the first time since 2016 was they didn't win enough games.

Looking back, Mara was extremely pleased with the job Judge did in a season overshadowed by a pandemic. Despite no offseason team activities and minicamps, a reduced training camp and virtual learning, the former Patriots' special teams coordinator provided leadership and the adaptability.

While discouraged by the team's 0-5 start and 1-7 record at the halfway point, Mara was encouraged by the 5-3 finish and attitude of the players. They never quit.

“I went to more team meetings than I ever have in the past, and the players were so attentive and so tuned in to the messages coming from the head coach,” Mara said. “It just seemed like we're on the right track. Now we just have to prove we’re on the track."

Turning to Gettleman, Mara said the longtime executive rebounded from personnel miscalculations made in 2018. He noted Gettleman has done a good job the past two seasons, particularly the selection of quarterback Daniel Jones in 2019 with the sixth pick overall. He added Gettleman and Judge worked together well.

“Quite frankly, I’m tired of sitting up here at the end of the year, trying to explain what went wrong and why I feel optimistic about the future,” he said. “I want to do it after a winning season. And I do believe that we have the right people in the building and locker room than we’ve ever had before.”

There had been some speculation Gettleman was either considering retirement or he might step away because of health concerns. He had cancer two years ago.

“I feel fine. I feel good. I’m excited,” said Gettleman, who will turn 70 next month. “You know, I just want to keep going.”

Gettleman will have a lot of work in the offseason, starting with the draft where the Giants have the 11th pick overall. They need playmakers on offense.

The salary cap is expected to dip. It was roughly $197 million last season and Gettleman guessed it might be as low as $175 million because of financial losses sustained in this troubled season where many teams played in empty or near-empty stadiums.

Gettleman has been criticized for averaging five wins and he admitted being disappointed.

Mara said the Giants took a significant financial hit in 2020. He did not say how much the team lost, but it would not affect the team’s ability to be active in the free-agent market.

“We’ll be OK,” Mara said. “We’re not ready to put a padlock on the door just yet. I think we’ll survive just fine. It’s been a tough year from that point of view. But listen, there are people all over this country that are suffering. I’m not out here complaining or anything. We’ll be fine as an organization going forward.”