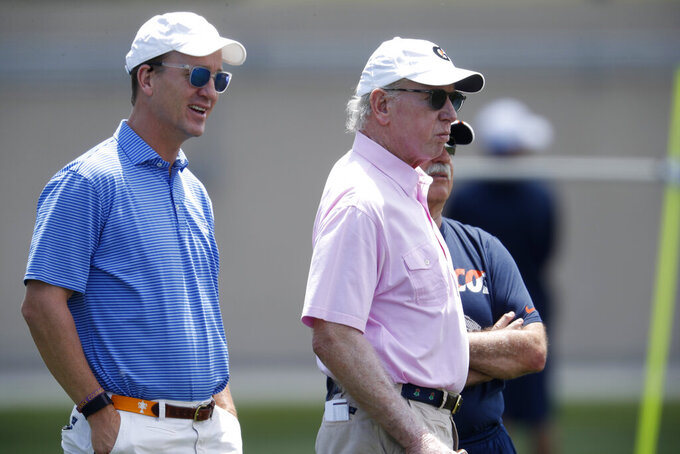 NASHVILLE, Tenn. (AP) — Peyton Manning, the former quarterback with a record five NFL MVPs among the string of awards and honors to his credit, calls his decision to attend the University of Tennessee one of the best he's ever made.

That makes being inducted into the Tennessee Sports Hall of Fame on Saturday night along with a handful of fellow Volunteers and David Cutcliffe, his former quarterbacks coach and offensive coordinator, even more memorable.

"It's very special," Manning said. "I was proud to have played at the University of Tennessee for four years and you go into the NFL, you kind of carry your alma mater with you and have wonderful support from friends, teammates, coaches throughout my career. ... So to be honored and have a chance to reflect on my time in college and all the relationships and memories, it's been very special."

Manning was being inducted along with a group including Cutcliffe, now the head coach at Duke; Kara Lawson, a 2008 Olympic gold medalist who played for Pat Summitt and is now a TV analyst; Charles Davis, a four-year starter at safety and now a Fox game analyst; and Kippy Brown, a former Tennessee coach who also coached seven NFL teams.

A Louisiana native, Manning also was inducted into that state's sports hall of fame earlier this year. Manning not only chose to attend Tennessee rather than father Archie's alma mater, Mississippi, but the quarterback endeared himself to Volunteers' fans for deciding to return and play his senior season in Knoxville in 1997.

Even after Manning left college, he continued his relationship with Cutcliffe, the man the quarterback turned to even during his career in the NFL where Manning was a 14-time Pro Bowl pick and the first starting quarterback to win a Super Bowl with two different teams.

"I would go back and work out with him in the offseason, and he would stay on top of my mechanics and fundamentals and of course a great friend throughout that process as well, so very special ... to be inducted in the same class as Coach Cut," Manning said.

Cutcliffe called Manning one of the special people in his life.

"How lucky can you be to get to basically coach Peyton for 22 years?" Cutcliffe said. "That's good enough there. I could've retired right then. It's just been fun. ... I think the thing that's most rewarding is that Peyton is such a dedicated individual when it comes to his trade. If you're going to work with him, you better get better. And Peyton Manning made me better."

Another inductee didn't play at Tennessee, but Patrick Willis got to try to tackle Manning in the NFL. The former San Francisco 49ers linebacker said he was grateful to be honored as part of what he called an amazing class. And yes, it's easier when not trying to defend Manning on a field.

"He's a genius on the field and off the field," Willis said. "Obviously, on the field, he's a general and yeah it's an honor to have played against him and to be going into the Hall of Fame with him."

Titans controlling owner Amy Adams Strunk also was being honored Saturday night as the 2019 Tennessean of the Year, a big honor for someone who had fans questioning her commitment to Nashville and the state when she took charge of the team in March 2015. Strunk helped Nashville host the NFL draft in April, an event that drew a record 600,000 fans.

Strunk said she hope she's answered any questions about herself after what's been a whirlwind the past four years. Posing for photos alongside Manning, whom her late father tried to sign in 2012, left her a little bit in awe.

"I'm happy to be part of the group," Strunk said.