Ready for some hockey? Green Day song may be new NHL anthem 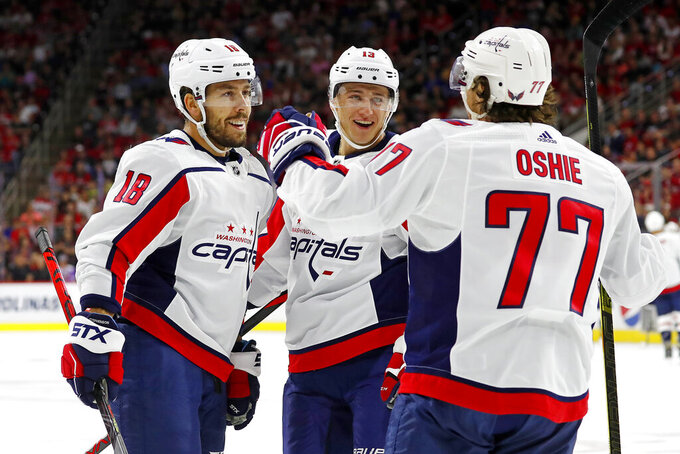 Washington Capitals' T.J. Oshie (77) celebrates his goal with teammate Chandler Stephenson (18) and Jakub Vrana (13) of Czech Republic during the first period of an NHL preseason hockey game against the Carolina Hurricanes, in Raleigh, N.C., Sunday, Sept. 29, 2019. (AP Photo/Karl B DeBlaker)

The NHL could be on the way to its version of "Are You Ready For Some Football?"

The league is announcing a two-year partnership with Green Day that includes an opening song for NBC Sports' "Wednesday Night Hockey." The song, "Ready, Fire, Aim" isn't custom-made for the NHL and will be on Green Day's next album, though it's likely a matter of time until Green Day or another band follows what Hank Williams Jr. and later Carrie Underwood did for the NFL.

"That I think will probably be the evolution," NHL chief content officer and executive Vice President Steve Mayer said. "If you look at our season and how many times this thing is going to be on, it'll become an anthem. The song, we're using slap shots, it's about scoring and speed — "Fire, Ready, Aim" — I think people will start associating this."

Green Day's open will debut Oct. 9. The band will also perform at the All-Star Game in St. Louis in late January, and new singles from its album will be released on "Wednesday Night Hockey."

"We're going to try some bold thing," Mayer said. "The performance that we're talking about at All-Star will be epic."

Green Day songs will be incorporated into arena mixes around the NHL and provide the soundtrack for much of the season on NBC Sports Network and NBC.

"We think it fits really well with hockey," NBC Sports executive producer Sam Flood said. "The song and the way it's executed is really fun."

Fourteen of the band's upcoming tour stops will come in NHL markets, including Seattle, which will join the league in 2021.

"Green Day, just the energy, how they have this great history but they keep on sort of reinventing themselves, they just work for us," Mayer said. "Their music is going to be part of a lot of what we're doing."

This story has been corrected to Hank Williams Jr. throughout.