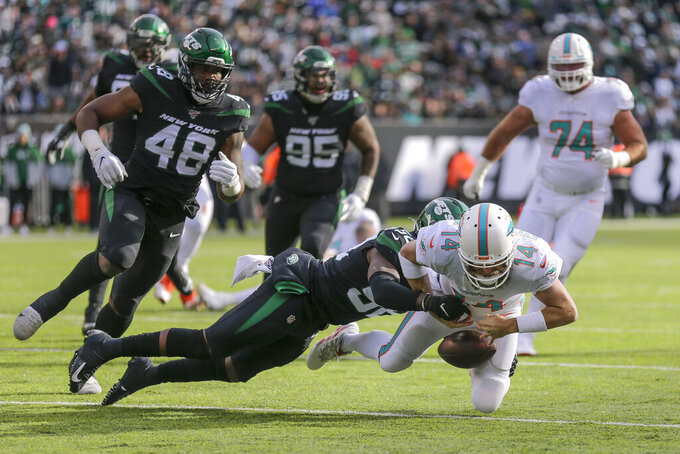 But the fact the kicker was so busy turned out to be a big reason for a 22-21 loss to the New York Jets on Sunday.

Sanders set the franchise mark with seven field goals, including a 37-yarder that gave Miami a 21-19 lead with 1:33 left. But a controversial penalty call helped New York on its winning drive, capped by Sam Ficken's 44-yard field goal as time expired.

“It was a tough way to lose," quarterback Ryan Fitzpatrick said.

And, really, it probably shouldn't have even been that close.

The Dolphins moved the ball all over the field against a banged-up Jets defense that was missing several players, including star safety Jamal Adams. But Miami finished 0 for 6 in the red zone — often settling for field goals by Sanders, who broke Olindo Mare's previous record of six set in 1999.

“Had a lot of field goals,” Fitzpatrick said. “I think we moved the ball well today, but didn't execute when we got down in the red area."

Adding to the Dolphins' frustrations was the fact they came in having scored touchdowns on 80% of their red-zone trips over their previous eight games. Against the Jets, though, the offense simply stalled.

Over and over again.

“They played a bend-but-don't-break style once we got in the red zone," said wide receiver Isaiah Ford, who led the Dolphins with six catches for 92 yards. “They played a lot of cover-2. I think we had some opportunities, we just missed out on them.”

Miami had a chance to swing the game in its favor in a big way when they got down to the Jets 10 in the closing moments of the first half after a 6-yard run by Fitzpatrick. Incompletions on second and third down forced the Dolphins to settle for a 28-yarder by Sanders that cut Miami's halftime deficit to seven at 16-9.

The Dolphins opened the second half with the ball and marched down to the Jets 9, but again couldn't punch it into the end zone. Myles Gaskin lost 4 yards on a run and two incompletions made it fourth-and-goal at the 13 — so Brian Flores had Sanders kick a 31-yarder that made it 16-12.

That 37-yarder had the Dolphins and their fans thinking of a two-game sweep of the AFC East-rival Jets.

But then their luck turned in a hurry.

Sam Darnold got New York's winning drive going with a short pass to Vyncint Smith, who turned it into a 37-yard gain. After a sack by Andrew Van Ginkel two plays later put the ball at the Dolphins 46, Darnold threw an incomplete pass to Smith.

“How else am I supposed to get to the receiver?" Needham asked. “He's in front of me. I can't run through him. I have to get around him to get the ball out. Yeah, so it's a P.I. in their house."

The play went to a video review at the league office by NFL rule since less than two minutes remained, and the interference call was added — giving the Jets a first down and new life.

Flores was angry after the game, shouting his displeasure at the officials. He refused to address the call with reporters, saying he was simply upset the Dolphins lost.

“It's just one of those things," Fitzpatrick said. “If I was on their sideline, I'd be happy. But, I was on our sidelines, so I'm not."

The veteran quarterback finished 21 of 37 for 245 yards and one interception as the Dolphins played most of the second half without top receivers DeVante Parker and Albert Wilson, who both left with concussions.

Fitzpatrick tried to focus on the positives in the defeat, including the games by Ford and rookie running back Patrick Laird, who had 48 yards rushing and 38 receiving.

“We obviously scratched and clawed our way back into that game," Fitzpatrick said, “and it would've been a nice one to win."