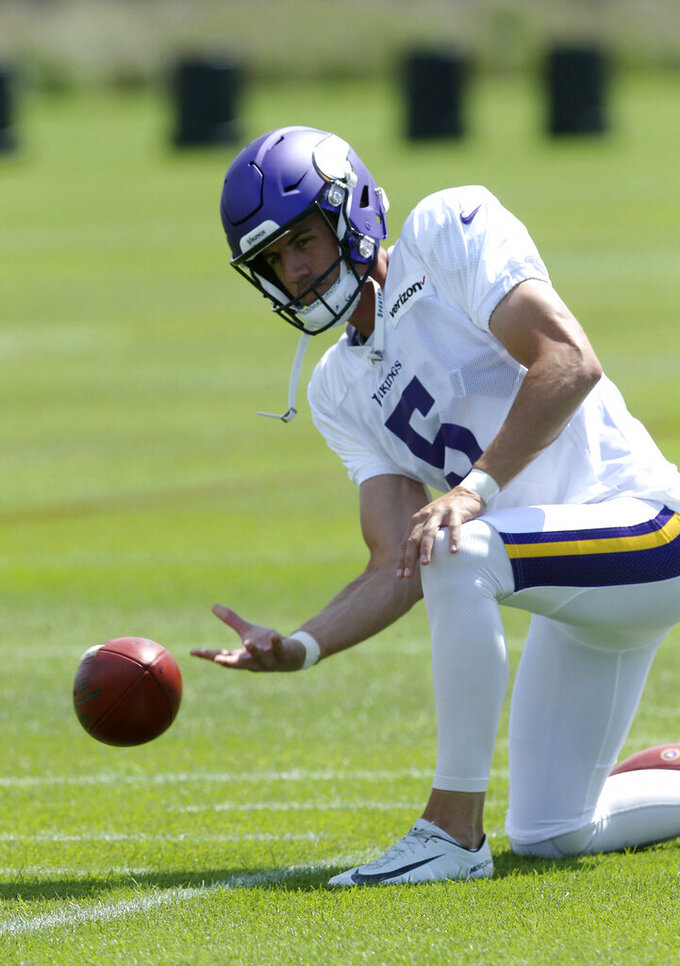 EAGAN, Minn. (AP) — The Minnesota Vikings have spent the first part of training camp in an all-too-familiar search for stability with their specialists for the kicking game, an issue that has persisted over most of the time sixth-year head coach Mike Zimmer has supervised the team.

Their latest attempt to address the problem could wind up as a dual solution, if Kaare Vedvik can develop into a reliable NFL performer in a pressure-packed role.

For now, though, regardless of who lines up to kick and drops back to punt in the regular season and beyond, the priority for Zimmer and new special teams coordinator Marwan Maalouf over the rest of the month will be to first establish a rhythm with those ever-important snaps and holds.

If the ball doesn't arrive just right, after all, a booming leg doesn't matter much.

To make room for Vedvik, who was acquired Sunday in a trade with Baltimore, the Vikings made the long-expected move of releasing long snapper Kevin McDermott to formally hand the job to rookie Austin Cutting. McDermott, a seventh-year veteran, held that role for the past four seasons, even returning to one game last year after losing a fingertip in the scrum on the line of scrimmage.

"We figured we had to get the battery down so we weren't using two snappers in and out, because we kind of worked on this operation, the field goal and things like that," Zimmer said Monday after Vedvik took part in his first practice with the Vikings. "It's not anything Kevin did. Kevin was a terrific team guy. Unbelievable person. It's just the way it goes sometimes."

Cutting, a seventh-round draft pick from Air Force who received permission from the military to perform his two-year service requirement in a recruiting office in the Twin Cities area, was in a rather sober mood as he spoke to reporters about the situation after his first business-of-football experience of seeing his mentor McDermott discarded.

Cutting was chosen for the underappreciated position as the cheaper, younger and more athletic option who, according to Zimmer, also snaps with a bit more velocity than his predecessor.

"There is such a thing as too many reps, but not right now, so it's good to be able to get in there and get used to everyone and all that," Cutting said.

Incumbent punter Matt Wile was the holder last season, and he struggled at times in his first year in the role. As camp began last month, the Vikings even gave wide receivers Chad Beebe and Adam Thielen a few turns, clearly not committed to Wile as the ball-catcher for kicker Dan Bailey on field goals and extra points. Now Wile has a cut on his finger, an injury suffered in the exhibition game Friday that required stitches, so he didn't so much as touch a ball during practice Monday.

Vedvik did, connecting on a pair of field goals off a tee from 60 yards out on a side field that prompted the type of loud cheers from the crowd that is usually reserved for long touchdown passes.

"I don't really look at the distance. I just kind of kick it and try to make it through," Vedvik said, downplaying the leg strength that has previously resulted in a 70-yard make in practice.

Vedvik, whose first name is pronounced KOHR-ee, is a native of Norway who spent 2018 on the non-football injury list with the Ravens after suffering head and facial injuries in an apparent assault during a night out in Baltimore at the end of the preseason. He was a first-team All-Conference USA selection as a senior from Marshall in 2017, making 10 of 16 field goals with a long of 45 yards, converting 41 of 42 extra points and averaging 44 yards per punt with a long of 92 yards.

Vedvik first came to the U.S. as a high school exchange student in Kansas, where he put his soccer skills to use on the football field after some encouragement by his host family. He eventually parlayed a strong performance at several kicking camps into a scholarship at Marshall. Now he's with the Vikings, an appropriate team for a player with Norwegian roots.

So is he a punter? A kicker? Both? He's not picky.

For the Vikings to finally win a Super Bowl, they're going to need to figure out these specialist roles that have been in flux for years.

The Vikings drafted kicker Blair Walsh in the sixth round in 2012 and watched him make the Pro Bowl as a rookie after taking over for stalwart Ryan Longwell, who is third on the franchise's career scoring list with 633 points in six seasons and holds the Vikings career record with an 86% field goal conversion rate.

They took the same tack the following year with punter Jeff Locke, replacing Chris Kluwe, but Walsh began to slump after getting a contract extension and then infamously missed the 27-yard field goal in the playoff game at home after the 2015 season that he never recovered from.

Kai Forbath replaced Walsh in 2016 and fared relatively well in 2017 with Ryan Quigley as the punter and holder, but the Vikings changed both spots in 2018 with rookie kicker Daniel Carlson and the punter Wile.

Then Carlson was dumped after two games, and Bailey entered the picture. Vedvik will likely replace Wile, but who knows? He could wind up as the kicker eventually, too, if not this year then perhaps in the future.

"We need to get it figured out," Zimmer said.

By The Associated Press 4 hrs ago
By Barry Wilner 5 hrs ago
By Arnie Stapleton 11 hrs ago
By Mark Ludwiczak 12 hrs ago
By William J. Kole 13 hrs ago