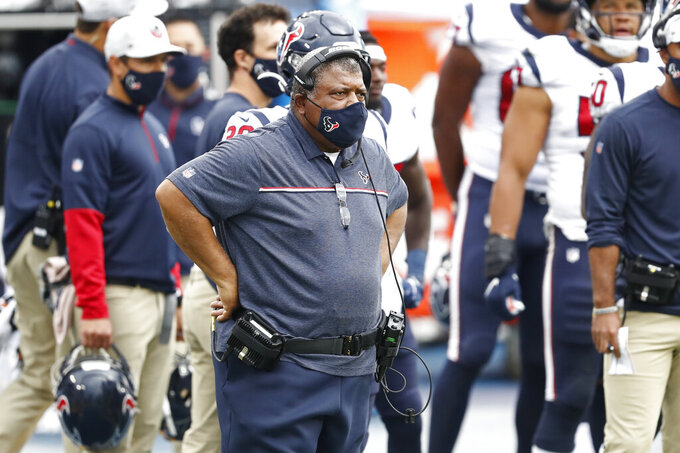 Deshaun Watson put the Houston Texans in position to beat the Tennessee Titans on Sunday with a touchdown pass with less than two minutes left that put them up by a touchdown.

All Houston had to do to hand the Titans' their first loss was get one stop on defense.

The Texans (1-5) gave up a TD pass by Ryan Tannehill with 4 seconds remaining to tie it, and Derrick Henry took a direct snap 5 yards for a score in overtime, giving the Titans a 42-36 victory.

“Offense played great, gave us opportunities to win the game and we did not finish the game on defense,” defensive end J.J. Watt said. “We had multiple opportunities and we didn’t do it and as a leader of the defense, I put that squarely on my shoulders. So, this one is very difficult to take.”

The late-game lapses by the defense spoiled a splendid performance by Watson, who threw for 335 yards and a season-high four touchdowns.

“He can get out of trouble, and it is tough when you are not able to take advantage of a performance like that ...," interim head coach Romeo Crennel said. "So we got to go back and hopefully he can have more performances like that and then defensively we can do a better job to help him out.”

The Texans made some big plays on defense Sunday allowing them to get back in the game after falling behind 21-10 at halftime.

Watt also sacked Tannehill and forced a fumble that Houston recovered later in the third, and Bradley Roby got the team’s first interception of the season when he picked off Tannehill with about 8½ minutes remaining. The Texans were the last NFL team to get a pick this season.

But Houston couldn't do enough to slow down Henry on a day when he ran for 212 yards and added 52 yards receiving. It was his second consecutive 200-yard rushing game against the Texans after he ran for 211 yards in a Tennessee win in December to help the Titans clinch the AFC's final wild-card berth.

His big day helped the Titans pile up 601 yards, which set a franchise record, topping the 583 by the Warren Moon-led Houston Oilers, also in overtime, against Dallas on Nov. 10, 1991.

Henry had two huge plays before scoring the game-winner on Sunday. He had a 94-yard TD run that put Tennessee up 29-23 early in the fourth quarter, and his 53-yard catch-and-run in overtime gave the Titans a first down at the Houston 27.

Tennessee tried that screen pass in the second quarter only to have Watt knock down Tannehill's pass. In overtime, Henry got the ball and finally was taken down by cornerback Lonnie Johnson Jr.

“We’ve got to tackle,” Watt said. “We had situations where we’re there, and we don’t make the tackles. And if you don’t tackle the guy, he’s going to run and score, especially a guy that talented, that good.”

While the offense played much better than the defense, especially down the stretch, the Texans also missed plays that would have allowed them to avoid overtime.

Káimi Fairbairn missed an extra point wide left in the third quarter. Crennel went for 2 after Houston’s last touchdown hoping to pad the lead with 1:50 left in regulation, but Watson’s pass to Randall Cobb was batted down.

“That could have been the possession to put them away for good,” Watson said. “We still had opportunities, but we didn’t capitalize on them as a team.”

Crennel was disappointed that the Texans didn’t execute on defense on Tennessee’s last play. Why? They had prepared for the Titans to run the wildcat offense with Henry getting the snap.

“If we hadn’t practiced that play, I would say maybe they weren’t prepared," Crennel said. “But that play was run in practice. And they should have been prepared."