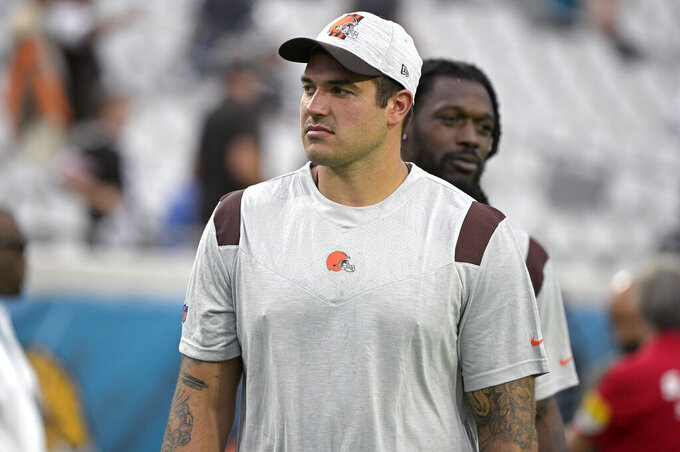 The Browns activated running back Kareem Hunt and Pro Bowl right tackle Jack Conklin from injured reserve, and they will be in the lineup for Sunday night's critical game against AFC North-leading Baltimore.

Hunt missed the past five games with a calf injury. Conklin was out for the past three with a dislocated elbow.

The Browns (6-5) have struggled to score — 17 points or less in six of the past eight games — but should get a boost with the return of one of their top playmakers and one of the NFL's best tackles.

Hunt is third on the team in scoring (five touchdowns) and fourth in receptions (20) despite missing almost half the season.

“Just his energy that he brings, it will be huge for us,” offensive coordinator Alex Van Pelt said Friday. “I do not see us using him a lot differently than we have in the past. Really just that one-two punch with him and (RB) Nick (Chubb), but any time you get him back on the field, it is good for the team.”

The Browns feared Conklin would be lost for months, not weeks, when he got hurt against Pittsburgh on Oct. 31. On Friday, Conklin described his injury, saying his elbow was pointed in the opposite direction after he tried to brace his fall and got kicked.

Conklin's return should only help the Browns' top-ranked running game and provide more protection for quarterback Baker Mayfield, who is dealing with an assortment of injuries.

The Browns play the Ravens twice in three weeks, with a bye week dividing the two games.

In addition to activating Hunt and Conklin, the Browns elevated defensive end Porter Gustin and return specialist JoJo Natson from the practice squad.