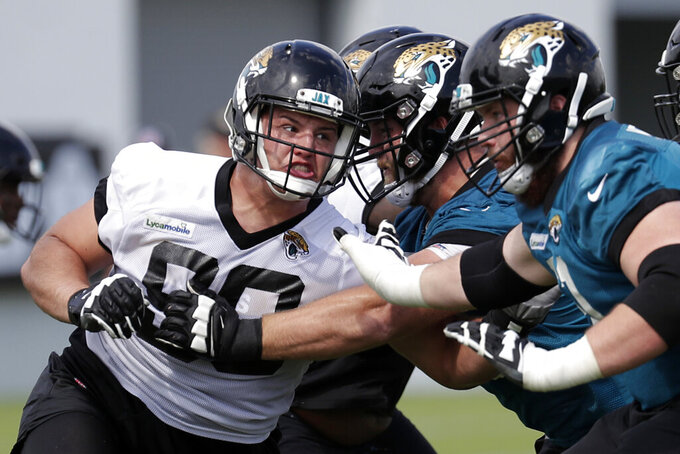 FILE - In this June 11, 2019, file photo, Jacksonville Jaguars defensive tackle Taven Bryan, left, rushes the offensive line during an NFL football practice, in Jacksonville, Fla. The defensive tackle and 2018 first-round draft pick is expected to be in the starting lineup again Thursday night, Aug. 29, 2019, when the Jaguars (0-3) host the Atlanta Falcons (0-4) in the preseason finale for both teams. (AP Photo/John Raoux, File)

JACKSONVILLE, Fla. (AP) — Taven Bryan has as many penalties (two) as tackles this preseason, hardly ideal considering he started each of Jacksonville's three exhibition games and has been on the field for a combined 77 plays.

The defensive tackle and 2018 first-round draft pick is expected to be in the starting lineup again Thursday night when the Jaguars (0-3) host the Atlanta Falcons (0-4) in the preseason finale for both teams.

It's coach Doug Marrone's way of pushing, pressing and prodding Bryan to show something, anything, before the regular-season opener against Kansas City.

"Taven has had a setback," Marrone said. "He is probably disappointed, but, hey, he has to get his mind right and go because there were some things he was doing earlier that were really exciting and would really be able to help our football team. That's what he wants to do, so strap it up and get your (butt) out there and go play and get better."

The Jaguars chose Bryan with the 29th choice in the 2018 NFL draft , knowing he would back up Malik Jackson as a rookie and believing he would eventually become a starter. He's shown glimpses, including his first sack in last year's season finale at Houston, but hasn't made the strides Jacksonville expected when personnel chief Tom Coughlin and general manager Dave Caldwell selected Bryan instead of filling bigger needs on the other side of the ball.

It probably didn't help Bryan's development that coaches moved him around last season, working him at end, nose tackle and 3-technique. Bryan is more settled now, lining up primarily inside and alongside veterans Marcell Dareus and Abry Jones.

"A little inconsistent," Bryan said. "Just make sure I'm focused on what's going to happen and get it done. It's another opportunity to get better."

The Jaguars won't play many, if any, starters against the Falcons. Marrone did the same in the first two exhibitions, preferring to have his players as healthy as possible for next week's opener against Kansas City.

Marrone plans to hold out most of the guys guaranteed to make the initial, 53-man roster. Even though Bryan is a lock to make the team, he still will be on the field to close out the preseason.

"You are trying to get that consistency," Marrone said. "I just try and keep things in perspective as in, 'It's not where we want to be. Fight through it.' It's like anything else. We have all been raised different ways, and life is going to kick you in the (butt) and it's not going to be good all the time. ...

"You just have to fight. If you don't, if you give up on yourself, how is anybody else going to keep you long?"

Bryan had 67 tackles, including 5 ½ sacks, in three seasons at nearby Florida. He was a 6-foot-4, 291-pound enigma his first two years in Gainesville, but came on as a junior in 2017. He had 40 tackles, including six for loss and four sacks, while playing solely inside.

He built a reputation on having a quick first step and being the strongest guy in the weight room. Although he never took over a game, he routinely demanded double teams on a defense with little talent up front.

The Jaguars were counting on the Wyoming native developing more pass-rushing moves and taking strides thanks to professional coaching and a more structured training program. They're still waiting to see results.

"I feel like Taven's taking the right steps," Jones said. "He's listening to us and trying to learn more about the game. ... He's made tremendous improvements with what's been asked of him, going from a power player to adding finesse to his game. I feel like the best is yet to come. He's a tremendous talent and he's got people coaching him up every day.

"He's going to turn it around."