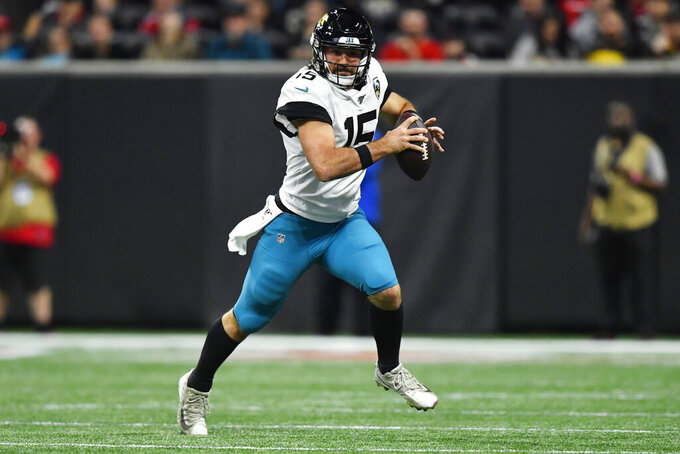 Jacksonville Jaguars quarterback Gardner Minshew II (15) runs out of the pocket against the Atlanta Falcons during the first half of an NFL football game, Sunday, Dec. 22, 2019, in Atlanta. (AP Photo/John Amis)

ATLANTA (AP) — It was nothing new for the Jacksonville Jaguars to fall behind early and come up short at the end.

So with top executive Tom Coughlin fired a few days ago, coach Doug Marrone sought to steer the blame onto himself.

“It's disappointing from the standpoint of this whole season's been disappointing," Marrone said. “I'm disappointed in myself that I haven't been able to put our players in better positions, especially offensively to get off to a better start. I think this team is fighting, but at the end of the day we're just not making a lot of plays. It starts with me. I've got to do a good job."

Sunday's 24-12 loss to the Atlanta Falcons was more of the same for a team that's dropped 20 of its past 27 games. This marked the 12th time during the streak that the Jaguars (5-10) have lost by double digits.

The game unraveled quickly. The Falcons went 82 yards on six plays on the opening drive, Michael Walker fumbled away the ensuing kickoff, and the defense gave up two touchdown to Devonta Freeman in a five-snap span.

Trailing 14-0 before the offense took a snap was not how Jacksonville drew it up. The offense only made it worse, missing on seven of its first eight third-down chances and failing to score a touchdown until the 12-minute mark of the fourth quarter.

“We can't keep putting ourselves in this situation and expect ourselves to bail it out every time," quarterback Gardner Minshew said after dropping to 5-6 as a starter. He completed less than 42 percent of 31 passes for 182 yards and had a 72.1 passer rating.

The last possession brought more frustration. Minshew drove the team to the 5, only to be turned away on three misfires and a sack. The last pass, a quick slant over the middle, was too far behind DJ Chark for the receiver to make a play in the end zone.

A touchdown would've made it a one-score game with about four minutes remaining. Instead the Jaguars turned the ball over on downs, and Atlanta ran out the clock.

Jaguars owner Shad Khan essentially started the team's offseason a few days ago with the dismissal of Coughlin, a disciplinarian who was fired in his second stint with the franchise after several questionable roster moves and a scathing critique from the players' union over his draconian disciplinary methods.

Khan has yet to state if Marrone, who went 5-11 last season but led Jacksonville to an AFC championship game appearance in the 2017 season, will return next year.

Chark, who missed last week's road win at Oakland with an ankle injury, is hoping for a good week of practice and a win in the season finale next Sunday at home against Indianapolis. He hopes Marrone and the coaching staff get another chance next season, but knows the decision is not his to make.

“Personally, I try to control what I can control," he said. “If there's changes made, you know, it's the NFL. You can't really expect anything else. If something happens, we have to keep moving with the punches. That's what we have to do."

Marrone said he told the players in the post-game locker room that he was proud of their effort. He blamed himself for having the offense mount more of a vertical attack early on with the Falcons squatting on routes. He blamed himself for not countering a better way to defend Atlanta receiver Julio Jones, who overcame consistent double teams to catch 10 passes for 166 yards.

“I'm not one of those guys — don't get me wrong — it's not like you stand up here and say, ‘You know, I really don't care,' he said. “That's (nonsense), right? We all care. It's humiliating. It's embarrassing. I just look back and all the things I should've done a better job of."