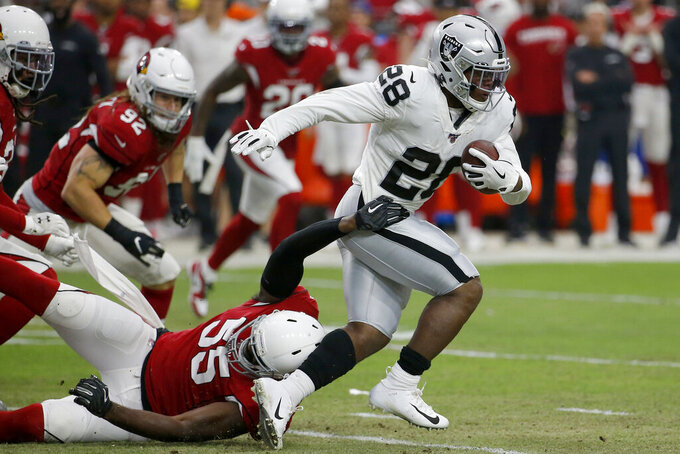 FILE - In this Aug. 15, 2019, file photo, Oakland Raiders running back Josh Jacobs (28) runs against the Arizona Cardinals during the first half of an an NFL football game in Glendale, Ariz. Once the regular season starts, the Raiders are hoping Jacobs can be the three-down featured back that has been missing of late on Oakland's offense. (AP Photo/Rick Scuteri, File)

NAPA, Calif. (AP) — Rookie Josh Jacobs flashed in what figures to be the only series he plays in the entire preseason for the Oakland Raiders.

Once the regular season starts, Jacobs could carry a much heavier load as the Raiders are hoping he can be the three-down featured back that has been missing of late on Oakland's offense.

"He's a good back, there's no doubt. He can run the ball. He has good vision. He can break arm tackles. He has some acceleration and burst, no doubt. I think he's going to be a really good player," coach Jon Gruden said.

"We're not sure what we're going to do yet, really, with turning the whole enchilada over to him or not."

The Raiders did that for the first drive last week in Arizona after holding Jacobs out of the preseason opener and the results were promising. He was handed the ball on the first three plays from scrimmage, running for 6, 8 and 7 yards as he showed the vision and elusiveness that made him such a prime prospect in the draft.

Quarterback Derek Carr was impressed with Jacobs' running as well as his approach in his first game as a pro, comparing him favorably to some of the more proven backs he's played with in his career like Marshawn Lynch, Latavius Murray, Darren McFadden and Maurice Jones-Drew.

"Watching his vision was really impressive because I have the best seat in the house. I'm sitting back there playing Madden tell him to cut back and trying to run for him," Carr said. "He's right up there with those guys. For him to do that, especially in his first game. I think the thing that rubbed off on me the most about Josh was his want to. It wasn't like, 'Oh man this is my first game.' None of that. He was out there just trying to bully people. He was out there trying to run hard. He didn't care that he's a rookie. He's trying to prove that he's the best back in the NFL. That's his mindset."

Jacobs added one more run for 1 yard before Carr threw a TD pass that ended the night for Oakland's first-team offense. With the Raiders set to play Thursday night on turf in Winnipeg, Manitoba, against Green Bay, most of the starters are expected to sit out of precaution. They won't play in the exhibition finale next week in Seattle either, making Jacobs' next likely appearance in a game to be in the season opener Sept. 9 against Denver.

While Jacobs wants to play, he views the safe approach the Raiders are using with him as a compliment.

"I think it just speaks volumes on what they think of me and what they see in me," he said. "So I am just honored to be out here and play football."

Jacobs was drafted 24th overall, the first running back or receiver taken in the draft despite being only a part-time player in college at Alabama. He had double-digit carries just seven times in his career and ran for 100 yards only once as he shared time with Damien Harris and Najee Harris.

Jacobs finished his career with 251 carries for 1,491 yards (5.9 per carry) and had 48 catches for 571 yards but is being counted on to carry a much bigger load in Oakland.

The Raiders have been particularly impressed with Jacobs' ability in the passing game as both a receiver and blocker. The Raiders haven't had many all-around featured backs since Marcus Allen's heyday in the 1980s. In the past 30 years, only Harvey Williams (1995), Charlie Garner (2001) and LaMont Jordan (2005) have had at least 200 carries and 50 catches in a season — marks Jacobs could hit as a rookie.

"He's very, very advanced," Carr said. "I think everyone knows you have to be really good in the passing game to play in Coach Gruden's offense as a running back. A lot of our quick game, the old West Coast, Joe Montana, Roger Craig kind of plays, all that kind of stuff. He has to be able to do that and he can. I think that coming in we knew how good of a runner he was. We knew he's tough, we knew he could block. You just never know with rookie running backs that are that big. How flexible are they? Can they run the routes? Can they catch? He's been really impressive."