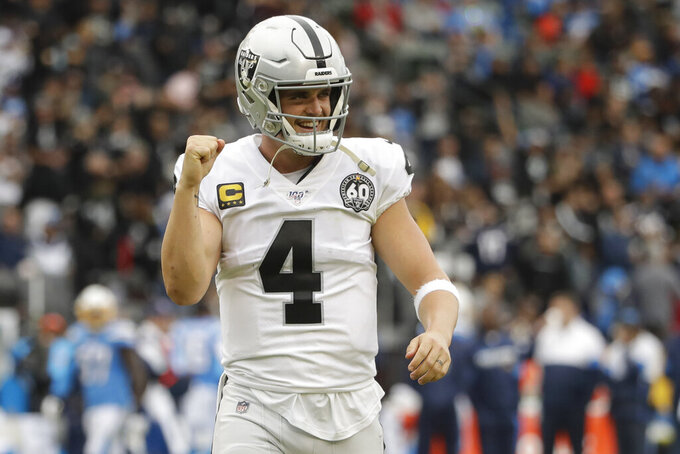 ALAMEDA, Calif. (AP) — Maybe it's only fitting that a team headed to Las Vegas is halfway to completing one of the most unlikely playoff parlays imaginable.

The Raiders went into this past Sunday needing five results to happen in order to stay alive in the AFC playoff race. They then watched as four of those happened early in the day with Cleveland, Pittsburgh and Tennessee all losing, while Indianapolis won.

Oakland then held up its end of the bargain with a 24-17 win against the Chargers and now what seemed to be an almost infinitesimally small chance at the postseason is no longer out of the realm of possibility.

"You can't control what's going on," coach Jon Gruden said Monday. "We just have a lot of young players playing. ... Hopefully we can continue to develop our roster and team and try to win games. If we get some help, that would be great. That would be awesome."

The path for the Raiders (7-8) is not easy. They must win at Denver, hope Pittsburgh loses at Baltimore, Tennessee falls at Houston and Indianapolis beats Jacksonville at home.

All of that would create a four-way tie between Oakland, Pittsburgh, Tennessee and Indianapolis for the sixth seed in the AFC. The wild-card spot would come down to the strength of victory tiebreaker between the Raiders and Steelers, which Oakland would win if any of New England, Chicago, Detroit or the Chargers win their games earlier in the day.

While it may still be remote, it's a far better feeling heading into Week 17 than the Raiders had a week ago after getting booed off the field and pelted with debris following a loss to the Jaguars in the final game in Oakland before next season's move to Las Vegas.

"It's crazy," rookie defensive end Maxx Crosby said. "We have to take care of next week. Go out there and get a win in Denver. That's all that we can control, but that's crazy that were still alive."

Opening drive. For the third straight week, the Raiders took the opening drive and drove for a touchdown. Derek Carr hit Hunter Renfrow on a 56-yard pass to provide the score, giving Oakland 54 points on the opening drive all season. Only the Ravens have more with 61.

Defensive penalties. The Raiders gave the Chargers four first downs by committing defensive penalties, including three on one TD drive in the second quarter. That's been an issue all year for Oakland, which has allowed a league-worst 48 penalties by first down. That's tied for the fourth most in a season since 1999.

Run defense. Oakland held the Chargers to just 19 yards rushing after allowing 146 in the first meeting. That marked the eighth time the Raiders ever held an opponent to under 20 yards on the ground or just the second on the road, having last done that in 1990 at Miami. Oakland has held four of the past five opponents under 100 yards.

RT Brandon Parker. Parker got the start with Trent Brown sidelined for the rest of the season but struggled in protection. He was replaced early by David Sharpe, who will likely remain the starter this week.

50. Carr has lost nine straight games when the temperature has been below 50 degrees. With forecasts for a high of 44 degrees Sunday in Denver, Carr will need to change that this week. For his career, he has a 65.9 rating in cold weather compared to 94.7 when it's above 50 degrees. The problems are especially glaring on deep balls, where his rating is only 37.5 on throws at least 20 yards downfield when it's cold.

Scoreboard watching and a trip to Denver on Sunday for what could be the final game ever for the Oakland Raiders.