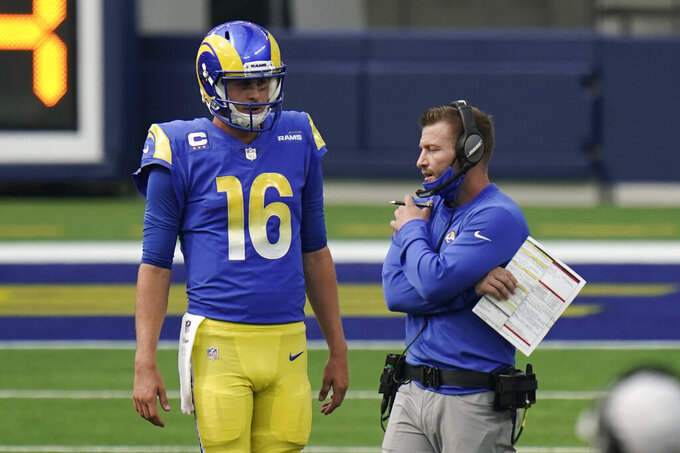 FILE - In this Oct. 4, 2020, file photo, Los Angeles Rams head coach Sean McVay, right, talks to quarterback Jared Goff (16) during the second half of an NFL football game in Inglewood, Calif. McVay says he cannot talk about Matthew Stafford until the new league year begins in mid-March and the Rams' blockbuster quarterback trade is official. He is still allowed to talk about Goff, but the coach is not saying much. (AP Photo/Jae C. Hong, File)

He's still allowed to talk about Jared Goff, but the coach isn't saying much.

In his first public comments since the Rams agreed to ship Goff to Detroit, McVay gave only a few minor insights Thursday into the ways he feels everything went wrong with his franchise quarterback just two years after they reached the Super Bowl together.

“I don't know that really a lot changed,” McVay said of the period between that Super Bowl run and the Rams' decision four weeks ago to move on from Goff, their No. 1 draft pick and McVay's starter over four winning seasons with 42 victories, two NFC West titles and three playoff wins.

“There's just so many things that have taken place since then,” McVay added. “I think what I would say that I learned over the last handful of years is things change by the day, and you probably want to be careful making blanket statements when you can’t predict the future.”

McVay had never been shy about professing his confidence in Goff, even when the quarterback's performances didn't appear commensurate with the $110 million guaranteed in the contract extension the Rams handed him in September 2019. As recently as last December, McVay said he and Goff were "in this together” while Goff wrapped up the season passing for 3,952 yards with 20 touchdowns and 13 interceptions.

McVay wouldn't say what made him decide to break up with Goff. McVay followed his usual line instead, accepting a large share of the blame for the Rams' offensive decline while complimenting Goff's growth and leadership.

“There are a lot of things when I self-reflect that I wish I was better for him in some instances,” McVay said.

McVay said there’s an “unfair narrative” around the Rams blaming their offensive regression over the past two seasons solely on Goff. The Rams were among the NFL’s highest-scoring teams in McVay’s first two seasons, but have slid to the middle of the pack since.

“That’s not true at all,” McVay said. “I have a big hand in that. I have to look myself in the mirror and take ownership of that. ... Sometimes you get too much credit and too much blame, but I’m not going to run away from the blame that’s deserved on my end.”

McVay said he has spoken at length with Goff since the trade. Goff has acknowledged feeling increasingly unwanted in Los Angeles up until he was blindsided by the trade, but McVay isn't about to provide that level of detail into the Rams' inner workings.

“Jared and I had a lot of conversations,” McVay said. “We had one that I want to keep between myself and Jared, but again, I don’t want to get into the specifics of those types of things ... I think we were both able to communicate open and honestly with one another."

NOTES: McVay praised C Austin Blythe and expressed hope the Rams will be able to retain the free agent: “He did a great job. He’s definitely somebody that we appreciate and value.” ... McVay agrees with most observers that the Rams need more explosive plays, and he repeated his hope of landing some big-play performers in the offseason: “When you have to go 12- and 15-play drives consistently, your margin for error is so small, the level of competition is so great, that you’ve got to be able to find ways to continuously create explosives, to give yourself a little bit of margin for error that it’s not always taking that many plays to produce points in this league.”