Titans ready for homestand after road-heavy start to season 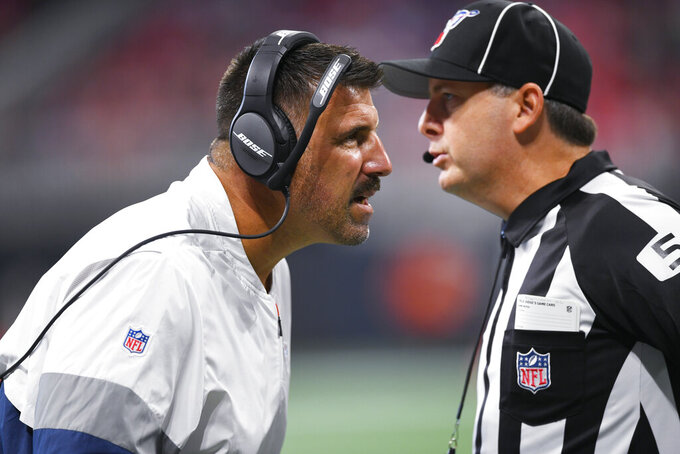 Tennessee Titans head coach Mike Vrabel speaks to players during the second half of an NFL football game against the Atlanta Falcons, Sunday, Sept. 29, 2019, in Atlanta. (AP Photo/John Amis)

NASHVILLE, Tenn. (AP) — The Tennessee Titans now have three-time Pro Bowl left tackle Taylor Lewan back from his four-game suspension after managing a split in his absence despite three of those four on the road.

"He demanded a hug, and it was a quick one," Titans coach Mike Vrabel said of Lewan on his return to work Monday. "But, we're back in business and he's back ready to help the team. We've got to get him ready to play."

The Titans also have a new challenge. They failed to build on a season-opening road win in Cleveland by dropping their next two games inside the AFC South. Coming off a 24-10 win in Atlanta, the Titans must prove if a franchise that has been 9-7 the past three seasons can do better than just get over .500.

Three of the next four games are in Nashville where the Titans have won 16 of their past 21 starting Sunday with a visit from Buffalo (3-1).

And a team that lost back-to-back games to divisional opponents Indianapolis and Jacksonville now finds itself tied in the AFC South with all four teams at 2-2. It's the first time that's happened through Week 4 in any division in the NFL since the 1970 merger.

The Titans came up with five sacks for the second time this season with Harold Landry having a career-high two. That ties them for fifth-most sacks in the NFL. They're also fifth allowing just 15.5 points a game a year after being the NFL's No. 3 scoring defense. They have six takeaways and one turnover this season to give them a plus-5 turnover margin.

The offense has yet to score on an opening drive this season, and the Titans keep finding themselves in too many third-and-long situations.

Marcus Mariota's struggles had fans ready to turn to backup Ryan Tannehill or even trade the fifth-year quarterback. Instead, Mariota came through throwing two of his three TD passes in the first quarter, and he had 189 yards passing by halftime. He finished 18 of 27 for 221 yards and a 129.7 passer rating, completing passes to eight teammates. Mariota also finally got the Titans' wide receivers the ball in the end zone with two TD passes to rookie A.J. Brown and one to Corey Davis.

This is the sixth game of Mariota's career with at least three TD passes and no interceptions.

"I do notice there's not as many fire the quarterback questions this week," Vrabel said.

Vrabel on fourth down. The Titans coach passed up a short field goal opportunity early in the fourth quarter that could have given Tennessee a three-score lead, and Derrick Henry was stopped for a loss when Vrabel chose to go for it. Vrabel also went for it on fourth-and-6 in the second half of their 20-7 loss in Jacksonville with Mariota sacked.

"I always think we're going to get it when we go for it," Vrabel said. "If I get the chance to do it again like everybody else, just be better and go up three scores. I just wanted to try to put the game away."

Linebacker Cameron Wake's right hamstring was being checked by trainers Monday. He was hurt early in the fourth quarter and finished the game with ice wrapped on his leg.

0 — After giving up nine sacks in the previous game and a league-worst 17 through the first three games, the Titans posted their first game without allowing a sack this season. Mariota helped that too, throwing the ball away under pressure four times.

Win a game in October. A year ago, the Titans went into October 3-1 and lost all three games that month before their bye. After hosting the Bills, their lone road trip will be to winless Denver before back-to-back home games against the Chargers and Tampa Bay.