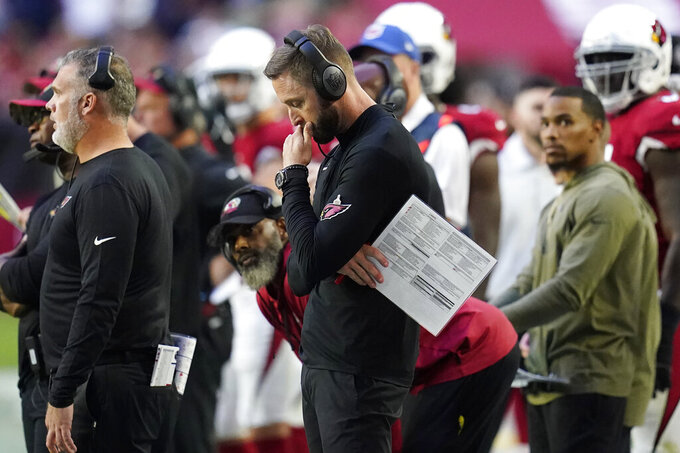 Arizona Cardinals head coach Kliff Kingsbury reacts from the sideline during the second half of his team's NFL football game against the Seattle Seahawks in Glendale, Ariz., Sunday, Nov. 6, 2022. (AP Photo/Ross D. Franklin)

TEMPE, Ariz. (AP) — If the object of HBO's “Hard Knocks” series is to document the day-to-day real struggles of an NFL team, the Arizona Cardinals are providing plenty of fodder for bad football and good television.

The Cardinals (4-7) have lost three of their past four games, been hit by myriad of injuries and are now dealing with the fallout of losing assistant coach Sean Kugler, who was fired after an alleged incident in Mexico City the night before the team's embarrassing 38-10 loss to the San Francisco 49ers.

The popular 56-year-old Kugler — who was the team's offensive line coach and run game coordinator — had been with the team since 2019. ESPN reported Kugler’s dismissal came after he allegedly groped a woman in Mexico City on Sunday night. He was sent home by the team before Monday's game.

The Cardinals have not elaborated on why Kugler was dismissed.

Veteran right tackle Kelvin Beachum has had a long relationship with Kugler — he coached Beachum as a rookie when both were with the Pittsburgh Steelers in 2012. He said he doesn't know any details of what happened, but that the team had to figure out a way to move past the surprise and disappointment.

“I had a chance to talk with (Kugler) yesterday,” Beachum said. “He's devastated by it. It shocked the room, shocked this team. But we've got to move on. ... Got to find a way to put some pieces together and get a win this weekend."

Coach Kliff Kingsbury acknowledged for the first time that Kugler had been fired during Wednesday's press conference, but said he couldn't elaborate on the reasoning because it was an “ongoing legal process."

Amid the off-the-field drama, the Cardinals are still trying to win football games. That starts with a home game against the Los Angeles Chargers (5-5) on Sunday.

There was one piece of good news Wednesday: Kingsbury said he expected quarterback Kyler Murray to be on the field after he missed the previous two games with a hamstring injury. Colt McCoy has been under center the past two weeks, leading the team to a win over the Rams, but also the lost to the 49ers.

“If we didn’t let him, we might have a fist fight in my office,” Kingsbury said of Murray jokingly. “I feel like he’s definitely trending in the right direction.”

Murray was listed as a full participant in the team's Wednesday's practice report, though it was an estimation because the team had a walkthrough instead of a full practice.

Murray returns, but now the Cardinals are beat up at other spots. Receiver Rondale Moore (groin) will likely miss the Chargers game after suffering an injury during the first offensive series against the 49ers. Greg Dortch came in as Moore's replacement and played great — catching 10 balls for 103 yards — but his status for Sunday's game is also in question because of a thumb injury.

All of this misfortune has happened while HBO's cameras are rolling. The Cardinals are the feature team in this year's mid-season edition of the award-winning show.

Veteran tight end Maxx Williams said Kingsbury had a meeting with the team and everyone's handling the turmoil as well as possible.

“We're still here to play football,” Williams said. “Coaches get fired all the time, things happen all the time, injuries. We've still got to play a football game this Sunday, it's a short week. I know everyone in our room is here to work.”

Kugler is the second member of the Cardinals’ coaching staff to face discipline this season. Running backs coach James Saxon was placed on administrative leave after he was charged with two counts of domestic battery. He eventually resigned from his position.

The constant turmoil has been a pattern this season.

Murray signed a $230.5 million contract in the offseason — which should have been good news — but quickly devolved into a fiasco when it was discovered the team put an unusual study clause into the contract, which called into question Murray's work ethic. The clause was eventually removed.

And those are just the highlights.

Or, more accurately, the lowlights.

“I've never been a part of anything like this,” Beachum said. “You've just got to find a way to battle, rectify things, find a way to right to ship. We're at a point in the season where there's still hope.”