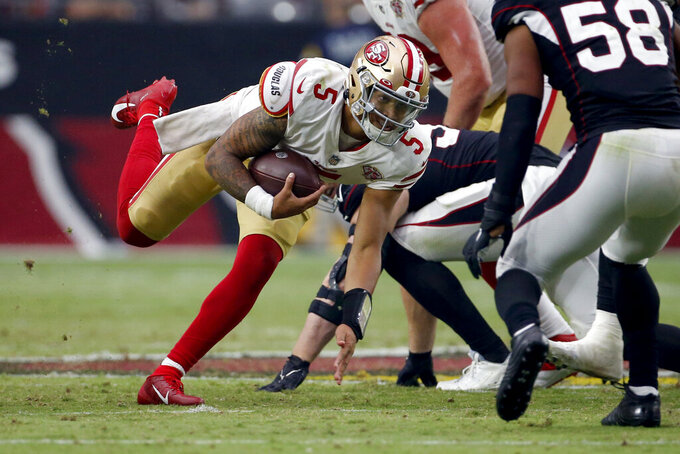 GLENDALE, Ariz. (AP) — Zach Allen will enjoy his postgame trip to Shake Shack after an exhausting, physical win over the San Francisco 49ers. He and the rest of the Arizona Cardinals' defense certainly deserve a burger or two.

The Cardinals improved to 5-0 for the first time since 1974, riding a stellar defensive performance to a 17-10 victory over the Niners on Sunday.

Arizona came in averaging 35 points per game, which led the NFL. This time, it was the defense that delivered, stopping the Niners and rookie quarterback Trey Lance four times on fourth down.

Allen said the Cardinals' defense was ready to stop the 49ers as many times as needed, though he conceded it was nice to watch quarterback Kyler Murray and the offense close it out with a couple first downs.

“At a certain point," the 285-pound Allen said with a grin, “you want to go home and have some food.”

DeAndre Hopkins hauled in a difficult 9-yard touchdown catch with 5:13 remaining, hanging onto the football despite tight defense from San Francisco's Josh Norman. That gave the Cardinals a 17-7 lead, enough of a cushion to close out the win.

“I take them any way we can get them,” Cardinals coach Kliff Kingsbury said. “Especially division wins. (San Francisco's) a great team, great culture, they play so hard and play together and have great energy. So if you can beat them, that's a great Sunday.”

Murray completed 22 of 31 passes for 239 yards. Hopkins caught six passes for 87 yards — including a 30-yard catch that set up his big touchdown reception — but said the major credit goes to the defense with the fourth-down stops.

The 49ers have lost three in a row.

Lance had an up-and-down first start, making some impressive plays with his arm and feet. But San Francisco struggled in many of the biggest moments, converting 1 of 5 chances on fourth down.

Lance finished 15 of 29 for 192 yards and one interception. He also led the team with 89 yards rushing. San Francisco outgained Arizona 338 yards to 304.

The Cardinals settled for a 10-0 halftime lead after Matt Prater missed a 61-yard field goal attempt as time expired. The 49ers (2-3) did a good job of slowing Arizona’s offense, which has thrived with Kingsbury, Murray and Hopkins.

The 49ers finally broke through late in the third quarter when Deebo Samuel ran 13 yards for a touchdown, cutting the deficit to 10-7. Samuel came in as the NFL's leading receiver and also proved a capable runner, taking the pitch from Lance and evading several Cardinals on the way to the end zone.

San Francisco had a few more chances in the fourth quarter but couldn't convert on fourth downs. Kyle Juszczyk was stopped short on fourth-and-1 at the Cardinals 48. The Niners got the ball back after Arizona's Chase Edmonds lost a fumble, but defensive lineman J.J. Watt deflected Lance's fourth-down pass a few minutes later.

“They ended up getting it done and winning the game, but I thought there were plenty of opportunities for us to do that,” 49ers coach Kyle Shanahan said. “Especially when we got that turnover at the end. It could have been a lot closer if we executed on some of those fourth downs earlier."

Arizona, the NFL's only remaining undefeated team, grabbed a 7-0 lead thanks to an efficient eight-play, 66-yard first-quarter drive capped by a 1-yard touchdown run by James Conner.

Lance started in place of the injured Jimmy Garoppolo (calf injury suffered in last week's loss to Seattle). The 21-year-old rookie had a rough start, throwing an interception after sailing a pass past his intended receiver and right into the arms of Arizona safety Budda Baker. He was also stopped on two fourth-down runs, including one inches shy of a touchdown.

On that play, Lance scrambled to his right and looked like he was going to score, but Isaiah Simmons and Tanner Vallejo closed quickly, meeting the quarterback just before the goal line in a violent collision. Simmons was evaluated for a concussion after the play, but later returned to the game.

Watt had his best game with the Cardinals, coming up with the big pass deflection in the fourth quarter and also getting his first tackle for a loss, stopping Elijah Mitchell for a 3-yard loss in the first quarter.

The three-time NFL Defensive Player of the Year has had a relatively slow start this season from a numbers standpoint. Even so, defensive coordinator Vance Joseph has been pleased with how much attention Watt draws from opposing blockers, making it easier for other on the defense to make plays.

49ers: DT D.J. Jones was evaluated for a concussion but returned to the game. DE Nick Bosa was dealing with an elbow injury but also returned.

Cardinals: Cornerbacks Byron Murphy Jr. and rookie Marco Wilson were both inactive because of rib injuries. ... TE Maxx Williams was carted off the field in the second quarter after a knee injury. Williams caught a 14-yard pass and then his knee appeared to buckle as he ran out of bounds. ... LB Ezekiel Turner (shoulder) and C Rodney Hudson (ribs) left in the third quarter.

The 49ers are off next weekend before hosting the Indianapolis Colts on Oct. 24.

The Cardinals travel to face the Cleveland Browns next Sunday.