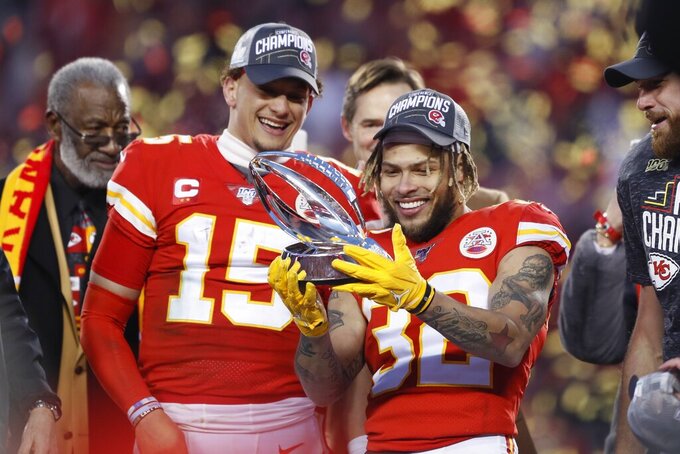 KANSAS CITY, Mo. (AP) — As the Hunt family stood on a makeshift stage Sunday, more than 73,000 fans deliriously cheering, the trophy for winning the AFC championship was presented.

A co-founder of the AFL and long-time owner of the franchise until his death in 2006, Lamar Hunt is a Pro Football Hall of Famer who was among the most respected men in pro football. In 1970, his Kansas City Chiefs won the Super Bowl, three years after losing in their first try.

Finally, after a half-century, they are headed back. Yep, the Lamar Hunt Trophy belongs to his family.

“It's a tremendous day for our family, and I should mention how happy I am for my mother (Norma),'' current Chiefs owner Clark Hunt says. "To hold and kiss this trophy really means a lot, and I think that's true for my whole family.

"My mom alluded to it on the stage, my dad always felt like the team belonged to the fans — and what we're most excited about today is winning this trophy for the fans.''

Those fans have seen five decades of falling short, including the excruciating overtime loss to New England in last year's AFC title game. They had to watch an opposing team lift that trophy in the first such presentation in Kansas City.

“Going to a Super Bowl is a treat any year,'' Hunt added, "but the closer you get to making it as a team, the experience is not nearly as good. Last year, yeah, we were glad to be there but we were also very disappointed we weren't playing in the (Super Bowl). We got that checked off at the end of the day.

"We still have a big goal to accomplish. At the beginning of the season I talked to our players about our goal. Making the playoffs was goal No. 1, bringing this trophy to Kansas City was goal No. 2. But we have another big goal out there.''

That would be taking home the Vince Lombardi Trophy, named after the man who coached Green Bay to the first Super Bowl victory in what then was called the AFL-NFL Championship Game. The Packers' opponent in 1967: Kansas City.

Andy Reid, hired as coach in 2013 after 14 seasons in Philadelphia, has made winning a tradition again in KC. Except for in the playoffs.

“There's something special about this trophy with the Hunt family,'' Reid said. "The Hunt family is incredible and Clark running this football team has done an unbelievable job with (GM) Brett Veach and all these guys that are out here. I wish I could get them all up on this stand here.

Safety Tyrann Mathieu is in his first season as a Chief. He recognizes the history with this original AFL franchise, then the Dallas Texans, who moved to Kansas City in 1963.

“It’s been 50 years since we brought this trophy back to Kansas City,'' he said. "It’s not about me, it’s not about Tyrann, it’s about the people of Kansas City. Everything that they sacrificed, everything they endured for the last 50 years.

"And it’s ultimately about Lamar Hunt. We wouldn’t be here without him. We wish he was here right now. I think Clark is doing a great job and this is what it’s about: Lamar Hunt.''