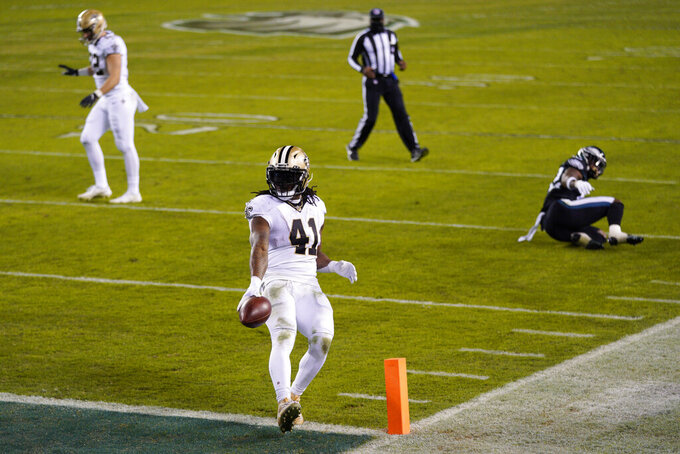 New Orleans Saints' Alvin Kamara runs for a touchdown during the second half of an NFL football game against the Philadelphia Eagles, Sunday, Dec. 13, 2020, in Philadelphia. (AP Photo/Chris Szagola)

PHILADELPHIA (AP) — Jalen Hurts provided the Philadelphia Eagles a spark with his legs and his teammates came up with their best all-around effort of the season.

They needed everyone to deliver to beat the New Orleans Saints.

Hurts ran for 106 yards and threw for 167 and one touchdown, Miles Sanders had 115 yards rushing and a pair of scores and Philadelphia defeated the Saints 24-21 Sunday, snapping New Orleans' nine-game winning streak.

“I thought overall there were good things," Pederson said. "This wasn’t about one guy. It was about how resilient this team is. He was part of the win. There were a lot of good performances.”

The Eagles (4-8-1) snapped a four-game losing streak and stayed within reach of Washington (6-7) in the woeful NFC East. They ran for a season-high 246 yards.

The Saints (10-3) were 8-0 over the past two seasons without Drew Brees before running into the inspired Eagles. The loss dropped New Orleans to the No. 2 seed in the NFC behind Green Bay, but they already have secured a playoff berth.

“When a team rushes for 250 yards, not a lot of good things can happen," Saints coach Sean Payton said. "But I’ll say this. (Hurts) was impressive just watching him. I thought he played with poise, made some throws. He was smart. He did a good job.”

Hurts was 17 of 30 in his first career start. He fumbled late in the fourth quarter. The 2019 Heisman Trophy runner-up began the season as the third-string quarterback. He was elevated to backup in Week 2 and took a few snaps each week until Wentz was benched during a 30-16 loss at Green Bay last Sunday.

“It's a great team win,” Hurts said. “Everybody played together as one. We had each other's back.”

Taysom Hill was 28 of 38 for 291 yards, two TDs, one interception and was sacked five times by Philly.

Sanders brook loose for an 82-yard TD run in the second quarter, giving the Eagles a 17-0 lead. He stiff-armed former teammate Malcom Jenkins on his way to the fourth-longest run in franchise history. Sanders has three runs of 70-plus yards since October. He had a 74-yard TD run against Pittsburgh and a 74-yard run against Baltimore.

“We played a whole four quarters,” Sanders said. “We looked like a complete team.”

The Saints had 98 total yards in the first half before they got going on their first possession of the second half. Alvin Kamara ran in from the 5 to cap a 65-yard drive and cut Philadelphia’s lead to 17-7.

The Eagles lost cornerback Darius Slay and safety Rodney McLeod on the same play before Kamara scored. Both were blitzing on the play.

The Saints took advantage on the next drive when Hill fired a 37-yard TD pass to Emmanuel Sanders, who beat Kevon Seymour, playing his first game for the Eagles.

New Orleans had a chance to take a lead, but Philadelphia’s defense came through. On fourth-and-2 from the Eagles 42, Josh Sweat strip-sacked Hill and Javon Hargrave recovered. Philadelphia again kept it on the ground and Sanders ran in from the 1 to make it 24-14.

The Eagles were trying to run out the clock when Hurts fumbled near midfield. Hill connected with Jared Cook on a 20-yard TD pass to get the Saints within 24-21 with 1:29 left.

But Philadelphia recovered the onside kick.

Hurts tossed a 15-yard TD pass to Alshon Jeffery on fourth-and-2 to give the Eagles a 7-0 lead early in the second quarter. Jeffery had two catches in four games this season before hauling in Hurts’ back-shoulder throw to give Philadelphia a rare lead.

After Duke Riley intercepted Hill’s pass that bounced off Kamara’s hands, Jake Elliott kicked a 44-yard field goal for a 10-0 lead. It was only the fourth pick this season for Philadelphia.

Will Lutz missed a 45-yard field goal wide right in the first quarter.

Hurts and Sanders are the first quarterback/running back combination to each run for 100 yards in the same game for the Eagles since Donovan McNabb and Duce Staley in 2002.

Saints: OL Nick Easton was evaluated for a concussion.