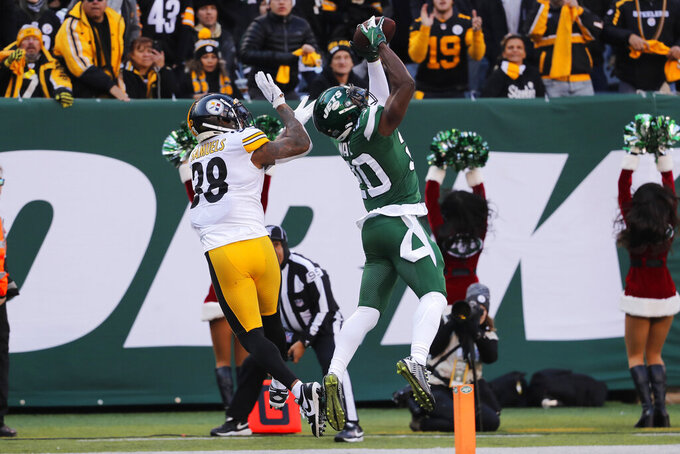 NEW YORK (AP) — This was exactly what Marcus Maye daydreamed about as he pushed through all those frustrating hours of treatment and rehab.

It's Week 17 and the New York Jets safety is finishing the season still on the field — healthy.

Maye's first two NFL seasons included some big plays, but injuries led to even bigger doubts from some who wondered whether he could stay healthy enough to be a consistent and reliable presence in the secondary. He's silencing all that by being all over the field — from the beginning of the season to the end.

“It means a lot," Maye said Tuesday. “In our profession, that's probably one of the main things is staying healthy and staying available. Going into the year, that was probably one of my main goals, just being out there with the guys and just trying to be out there for my team."

The 26-year-old Maye was a second-round draft pick in 2017 out of Florida, selected 33 picks after the Jets took Jamal Adams. New York envisioned having the best safety duo in the NFL, causing matchup nightmares for opposing offenses.

While Adams has developed into a two-time Pro Bowl selection, injuries have stunted Maye's progress. Maye actually started every game as a rookie, but the last was shortened by a severe ankle injury that also caused him to miss the first three games of last season.

He came back and made plays, including making some dubious history when he returned an interception 104 yards and was tackled just short of scoring a touchdown for longest INT return without scoring. But Maye broke a thumb the following week and missed a game. He played in three more contests before injuring a shoulder and missing the rest of the year.

“There were definitely a lot of ups and downs," Maye said. “It's just something that you can't control in our game. It's just part of the nature. Trying to get back out there and the long offseason with the rehab and the treatment sessions, it's definitely something that isn't easy to go through."

Maye focused on being back for the season opener this year, and he made it.

While he might be overshadowed a bit by the more vocal Adams, Maye has done his part as a crucial part of Gregg Williams' defense. He's fifth on the team with 57 tackles and has one interception and six passes defensed as the starting free safety.

“What he's doing on the field does not shock me," said Adams, who considers Maye a close friend. “It shocks a lot of people outside because they don't really watch him or understand who he is as a player. So, what he's doing, hats off to him."

Maye was all over the field last Sunday in New York's 16-10 win over Pittsburgh, and had two of the game's biggest plays.

“He balled, bro," Adams said. “He's very underrated. People don't give him his respect, but he works his butt off."

With the Steelers driving for a potential score in the second quarter, Maye picked off Devlin Hodges' pass intended for Jaylen Samuels in the end zone by making a leaping grab.

He topped that late in the fourth quarter with the game on the line when Hodges threw a deep pass on third down from the Steelers 44 and Maye twisted his body in midair, extended his left arm and knocked the ball out of James Washington's hands to break up the pass just short of the end zone.

“The quarterback threw a great ball,” Maye said. “I was just trying to find the ball, track the ball and doing what we do every day in individuals (drills) and we came out on the right end of it."

It saved the game for the Jets, and served as a reminder of just how good Maye can be when healthy.

Maye hopes to continue the good fortune for one more game, and to come out of it unscathed. It would be the first time in his NFL career he would be able to focus simply on improving his skills in the offseason instead of spending countless hours with trainers.

NOTES: The Jets had a walkthrough practice, but coach Adam Gase said G Tom Compton (calf), G Alex Lewis (ankle) and WR Demaryius Thomas (hamstring) didn't participate. ... Adams was among those considered limited after returning Sunday from an ankle injury that sidelined him two games. He said he'll be fine to play at Buffalo. When asked if he thinks the Jets owe the Bills some payback for the loss in Week 1, Adams didn't hesitate: “Yeah, we're coming after them. We're huntin', man. It's a playoff game for us. We hear they're going to start their starters — that's good. We're looking forward to the matchup, I can tell you that.”